The official launch in April 2017 of the Maluti-A-Phofung Special Economic Zone was a significant event for the economy of the Free State.

Although agriculture and mining remain the mainstays of the provincial economy, diversification and expansion through initiatives such as Special Economic Zones (SEZs) are key to the future of the centrally located province.

Sectors prioritised at the Maluti-A-Phofung SEZ (which is located on South Africa’s busiest highway, the N3) include logistics, ICT, automotive, pharmaceuticals, manufacturing and agri-processing. The 1 000 ha site will have four zones: agri-processing, light industrial, heavy industrial and a container terminal.

The reference to agri-processing points to a broader trend in economic planning in South Africa – the desire to create value-added goods out of raw materials. This applies to agriculture (in which the Free State enjoys great riches) and minerals.

Five agri-parks are planned in each of the Free State’s district municipalities which will boost production so that more produce is available for beneficiation. Within these parks, support for rural smallholders will be available in terms of equipment hire from a central source, storage facilities, packaging of produce and getting products to market. The use of small towns such as Cornelia, Tweeling, Excelsior and Tweespruit as hubs under the Comprehensive Rural Development Programme (CRDP) should boost the rural economy and provide opportunities for investors.

The idea of clustering developments is also behind the N8 Corridor concept which covers Bloemfontein, Botshabelo and Thaba Nchu. Within this are several projects including the ICC Precinct (hotel and convention centre in Bloemfontein), Bio-Medical Park, Airport Node (logistics and supply chain, warehouses, residential apartments, hospitals, schools, hotels and new shopping malls), and tourism infrastructure for the Naval Hill Development.

Another important pillar of the economy of the Free State, the chemicals and fuels hub at Sasolburg, is modernising and expanding. International fuel, gas and chemicals company Sasol regularly invests in new technologies and in expanding production of its various products.

The Provincial Government of the Free State has hosted two events targeting foreign investors, called the Free State Global Investors Trade Bridge. In November 2016 the first Free State/Madeira Flower Festival took place in Parys. This is a first step in creating links to export markets in floriculture and horticulture.

A new water pipeline from the Xhariep Dam is being built to serve the Xhariep District and the Mangaung Metro. A steady and reliable water source is an important component in attracting investment.

Five major national highways intersect the centrally located province, which is also well served by rail and air links. The Bram Fischer International Airport in the provincial capital city of Bloemfontein is the site of a multi-phase industrial and commercial development. Two leading universities (the University of the Free State and the Central University of Technology) have several campuses across the province.

A potentially game-changing development in the local economy is the building of a R200-million helium extraction plant to exploit a natural gas and helium field near the towns of Virginia, Welkom and Theunissen. With proven reserves of 25-billion cubic feet, the rights to the field are owned by Renergen and they will be worked by Afrox, a subsidiary of the Linde Group of Germany.

Another emerging sector is solar energy. The Xhariep, Lejweleputswa and Mangaung regions have among the best direct solar radiation kWh/m² in the country. Rezoning for solar farms has already taken place in Theunissen, Bloemfontein, Fauresmith and Hoopstad.

The Free State shares borders with six other provinces, in addition to the Mountain Kingdom of Lesotho. A summer-rainfall region with a mean annual rainfall of 532 mm, the Free State’s climate, soil types and topography vary greatly within the province, with plains in the west and mountains in the east. The western and southern areas are semi-desert, with some Karoo vegetation occurring in the south.

The Free State produces significant proportions of South Africa’s wheat (30%), sunflowers (45%) and maize (45%). As such, it is ranked third in contribution to national GDP in agriculture.

Municipalities in the Free State 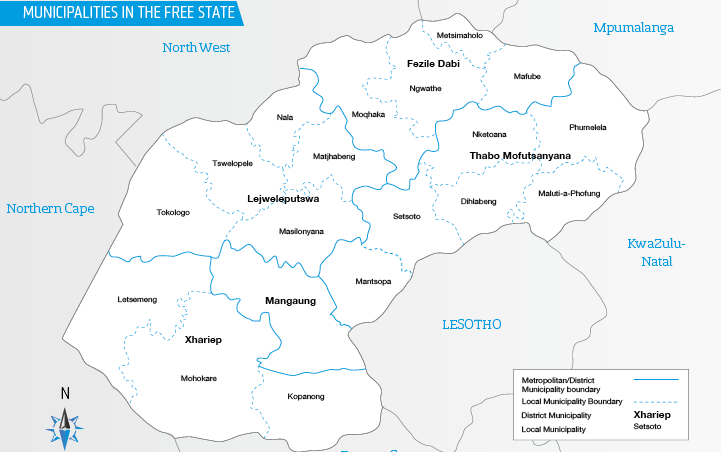 Mangaung Metropolitan Municipality is a Category A municipality which governs Bloemfontein, Botshabelo and Thaba Nchu. The sixth-largest city in the country, the Mangaung municipal area covers more than 6 263 km² and has a population of about 850 000 people. The languages spoken in the area are mainly Sesotho, Afrikaans, English and Setswana.

Bloemfontein, which is responsible for about 25% of provincial GDP, is at the centre of a development node known as the N8 Corridor which is intended to boost development along the road from Lesotho to Kimberley and Upington in the North West province. Several projects are under way in and around the provincial capital, including an Airport Node (logistics, supply chain, flats, shopping malls), Naval Hill (projected new hotel in the nature reserve), expansion of Hamilton Business Park.

The city’s Fresh Produce Market is an important cog in the distribution of agricultural produce in the region while it is connected to all other centres by good rail and road links. There is a marshalling yard, a petroleum depot and two airports (one military). The national Supreme Court of Appeal is located in Bloemfontein and the National Museum has superb rock art exhibits.

The southernmost region of the Free State is a largely dry area with open grasslands predominating, although it is also home to the Gariep Dam, South Africa’s largest dam. Crops are produced in the northern parts of the district whereas sheep farming predominates in the south. Trompsberg has the second-biggest sheep-shearing barn in the country.

Diamonds, gravel and clay are mined at Koffiefontein. Jagersfontein is one of the first places where diamonds were found, and it has its own version of the Big Hole to prove it. The town of Bethulie is a good stopping-over place for tourists wanting to experience the water sports available on the Gariep Dam.

The dam is also the site of small hydro-power and aquaculture projects which are intended to create employment and tackle food security. The nearby Tussen die Riviere Nature Reserve and the Mynhardt Game Reserve have a variety of wildlife in spectacular settings. Jacobsdal’s Landzicht winery has proved itself as a worthy producer of wine. San rock paintings and Anglo-Boer War sites are plentiful.

Fauresmith hosts an annual horse endurance race and Smithfield is the venue for a “Chill” festival every winter, the “Bibber Fees”. The steel bridge over the Caledon River at Wepener is a national monument.

Mining is the most important economic activity in this area, also known as the Free State Goldfields, but it is also the most important maize-growing area in South Africa. A large natural gas field has been discovered on what used to be gold turf. Bothaville is the self-proclaimed Mielie Capital of South Africa but it is a name that is apt. The town hosts the annual NAMPO maize festival and the headquarters of Grain SA.

Mining town Welkom is the major urban centre in the district. The town of Virginia is the site of a jewellery school and it is intended that this will form the nucleus of a jewellery beneficiation hub and an IT hub.

The area has tourist assets such as a holiday resort on the Allemanskraal Dam, the Goldfields Wine Cellar in Theunissen and the Willem Pretorius Game Reserve but there is potential for growth in the heritage sector.

The chemical complex at Sasolburg is the economic driver in the district, which shares a border with Gauteng province along the Vaal River. The town of Heilbron is another important industrial centre and Frankfort does important agricultural processing work. Kroonstad is the district’s second-largest town and has a number of engineering works and a railway junction. A new kraft paper factory has been planned for Frankfort.

A good proportion of South Africa’s grain crop is sourced from this district and when the vast fields of sunflowers and cosmos flowers are in bloom, a marvellous vista is created. The Vaal River presents opportunities for yachting, rafting and resort-based enterprises. Parys is a charming town and Vredefort is home to a World Heritage Site – the Vredefort Dome where a meteor crashed to earth.

The establishment of ChemCity, a wholly owned subsidiary of Sasol, has also added a business incubator that allows SMMEs to feed off and diversify from the opportunities that prevail due to the energy consortium operating in the area.

Industrial activity is undertaken at Harrismith and Phuthaditjhaba, where the Free State Development Corporation is promoting investment. The Maluti-a-Phofung Special Economic Zone (SEZ) at Harrismith is a multi-modal transport and logistics hub.

The commercial centre of the district is Bethlehem while Clarens and Ficksburg have become famous for their artists and cherries respectively. Marquard produces 90% of South Africa’s cherries. The north of the district has many sunflower seed farms.

Investment opportunities in the key economic sectors have been identified in the Maluti-A-Phofung SEZ as well as elsewhere in the Free State.