A regional overview of the Free State Province

New opportunities are opening up in the Free State in the gas and energy sectors. Several new licences to explore for gas have been granted and a R200-million helium extraction plant is under construction near Virginia.

With proven reserves of 25-billion cubic feet, the rights to the field are owned by Renergen and they will be worked by Afrox, a subsidiary of the Linde Group of Germany.

The Stortemelk Hydropower Project (pictured above) was built as part of the national Renewable Energy Independent Power Producer Procurement Programme (REIPPPP). The collaboration of Renewable Energy Holdings (REH), Aurecon and Earthworld Architects delivered a facility with installed capacity of 4.5 MW on the As River. Unusually for a power plant, the project won the 2017 Award for Architecture from the South African Institute of Architects for the Free State region.

Another emerging sector is solar energy. The Xhariep, Lejweleputswa and Mangaung regions have among the best direct solar radiation kWh/m² in the country. Only Upington in the Northern Cape has a better solar-radiation index. Rezoning for solar farms has already taken place in Theunissen, Bloemfontein, Fauresmith and Hoopstad.

Foreign investments into the Free State totalled R8.4-billion in 2017 and the province has now achieved the status of being a net exporter of goods.

Relations have been established with 35 countries. Africa and the BRICS grouping of Brazil, Russia, India and China are focus areas. Other partnerships based on education and trade include countries and regions like Portugal, Turkey and Madeira.

An annual Global Investors Trade Bridge is held to promote investment into the province. In November 2016 the first Free State/Madeira Flower Festival took place in Parys. This is a first step in creating links to export markets in floriculture and horticulture.

The official launch in April 2017 of the Maluti-A-Phofung Special Economic Zone was a significant event for the economy of the Free State.

Although agriculture and mining remain the mainstays of the provincial economy, diversification and expansion through initiatives such as Special Economic Zones (SEZs) are key to the economic future of the province.

Sectors prioritised at the Maluti-A-Phofung SEZ (which is located on South Africa’s busiest highway, the N3) include logistics, ICT, automotive, pharmaceuticals, manufacturing and agri-processing. The 1 000 ha site will have four zones: agri-processing, light industrial, heavy industrials and a container terminal. A chemicals factory opened in the zone in 2018.

The idea of clustering developments is also behind the N8 Corridor concept which covers Bloemfontein, Botshabelo and Thaba Nchu. Within this are several projects including the ICC Precinct (hotel and convention centre in Bloemfontein), Bio-Medical Park, Airport Node (logistics and supply chain, warehouses, residential apartments, hospitals, schools, hotels and new shopping malls), and tourism infrastructure for the Naval Hill Development.

Another important pillar of the economy of the Free State, the chemicals and fuels hub at Sasolburg, is modernising and expanding. International fuel, gas and chemicals company Sasol regularly invests in new technologies and in expanding production of its various products.

A new water pipeline from the Xhariep Dam is being built to serve the Xhariep District and the Mangaung Metro. A steady and reliable water source is an important component in attracting investment.

Five major national highways intersect the centrally-located province which is also well served by rail and air links. The Bram Fischer International Airport in the provincial capital city of Bloemfontein is the site of a multi-phase industrial and commercial development. Two universities (the University of Free State and the Central University of Technology) have several campuses across the province.

The Free State shares borders with six other provinces, in addition to the Mountain Kingdom of Lesotho. A summer-rainfall region with a mean annual rainfall of 532 mm, the Free State’s climate, soil types and topography vary greatly within the province, with plains in the west and mountains in the east. The western and southern areas are semi-desert, with some Karoo vegetation occurring in the south.

The Free State produces significant proportions of South Africa’s wheat (30%), sunflowers (45%) and maize (45%). As such, it is ranked third in contribution to national GDP in agriculture.

Looking for investment opportunities in the Free State?

Go to Free State Development Corporation to browse opportunities and learn more about the investment environment of the province. 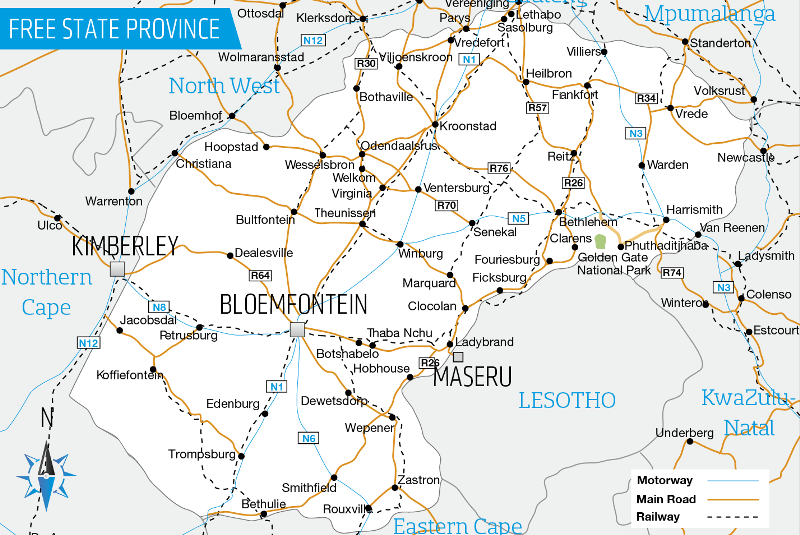