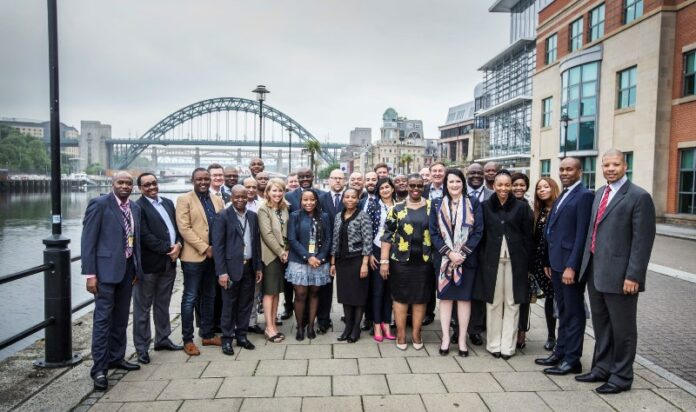 Over 45 people from business and government – the biggest combined regional delegation ever to travel on an investment roadshow – spent their last mission day in London on Friday 8th June to share the facts that Durban, KZN is Africa’s ‘premier investment destination’.

Delegates were responding to a request from eThekwini Mayor, Cllr. Zandile Gumede, to promote the city and the province that houses it – KwaZulu-Natal, to the UK markets. The Mayor said, “Durban is geared for growth and we came in force to the U.K., with our Business Leaders, to confirm in person that we are ready for significant new investments.”

The Durban Mayor and MEC Finance, Mrs Belinda Scott, had several detailed engagements beginning in Newcastle and County Durham, before progressing on to London. These engagements with the UK’s “Northern Powerhouse” were with the Mayors, Councillors and Business Leaders in Newcastle, Tees Port, and County Durham to advance mutually beneficial partnerships. Newcastle is a formal “Partner City” with Durban, and our Durban Chamber of Commerce has an active Partnership Agreement with the N.E. England Chamber of Commerce.

Mrs Katie Friedman, a British Citizen now resident in Durban, one of the founding Directors of Urban Lime Properties (specialists in commercial urban regeneration who have invested GBP100-million in Durban to date) gave reasons why they chose Africa’s premier investment destination city. She said: “As a British company, we started investing in Durban in 2014, not only because there were great business opportunities, offering strong attractive returns, but also because Durban offers the best quality of life in Africa for families. This is an extraordinary, vibrant, African city, alive with possibilities for all who come to work in partnership with South Africans. It’s now home to our thriving business and also our ‘forever’ family home.”

When planning the London leg, only about 25 B2B (business-to-business) meetings with investors, financiers and those interested in the region’s offerings were expected to take place, but due to high demand, more than 65 B2B meetings were concluded. These were with the likes of UK companies Nex Rubica, Invest Trade SA, Fieldstone, Abalon Capital and Titanium Capital.

Cllr Sipho Kaunda, eThekwini Municipality’s Economic Development and Planning Committee Chairperson attributed the interest, “to the opportunities the region has for both small and large investors. The 65+ B2B meetings concluded on Friday alone set a new record from which additional investments will flow into our economy.”

Martin Orji, Managing Principal and Board Member of NR Capital, one of the investors at the London B2B meetings, described these engagements as, “timely, in terms of the selection of projects – it is the type investors need to see”, he said.

This was confirmed by Mr Batanayi Katongera, a Head at MacFarlanes LLC in London who remarked, “The quality of the projects, and the packaging plus presentation of the Durban investment materials is truly world class; better than most I’ve seen in London to date.”

In closing, Mr Phillip Sithole, eThekwini Metro’s Deputy City Manager advised, “We are pleased to have brought 45 top executives to the U.K. with a combined total value of projects open for investment which exceed 10 billion Pounds. We are proud to have brought in big business leaders from Durban who are looking for international partners, and many of them had more than 5 business meetings on this 1 day in London alone. So indeed, we took Durban to the world”, Sithole confirmed.

Invest Durban will now be assisting these businesses, and others from both the U.K. & Durban who couldn’t come, to make follow ups in the coming weeks. This increased bilateral trade and investment will be ensured to benefit all communities in both the U.K. and Durban, KwaZulu-Natal.