The African Continental Free Trade Area (AfCFTA) will come into effect in July 2020. A single market of 1.3-billion people is expected to grow to 2.5-billion by 2050.

The AfCFTA aims to accelerate the growth of intra-African trade and to use trade as an engine of growth and sustainable development, which will strengthen Africa’s voice in global trade negotiations. The AfCFTA head office will be in Ghana.

Currently, trade between African nations is between 15% and 18% of total trade, as against 69% in Europe and 59% in Asia (United Nations Conference on Trade and Development (UNCTAD) and Brookings Institution). Tariffs on 90% of all goods are to be removed. The Boston Consulting Group notes that exports between African countries grew from $41-billion in 2007 to $65-billion by 2030 but this figure will rise exponentially if AfCFTA is implemented.

One prediction is that intra-regional trade could increase by 52.3% by 2022 (UN Economic Commission on Africa). The African Union (AU) believes trade will increase by 60%.

Just four countries currently account for 41.7% of intra-African trade, South Africa, Namibia, Nigeria and Zambia, according to the Export Credit Insurance Corporation of South Africa (ECIC). The ECIC has invested in the African Export Import Bank in an effort to boost intra-continental trade to $250-billion in 2021. The South Africa-Africa Trade and Investment Promotion Programme has the same goal.

The passing of the African Growth and Opportunity Act (AGOA) in 2000 was a boon for 39 Sub-Saharan African countries because 6 500 products could be sold duty-free in the United States of America. The bill will expire in 2025 so it’s timely that Africa’s leaders are looking to stimulate growth in new ways. In the current political climate, it is unlikely that AGOA will be renewed. President Trump has declared himself strongly opposed to multi-lateral agreements. The AU will lobby for a continent-wide agreement, but the US is likely to seek bilateral deals.

Trading with the world

The United States is no longer number one when it comes to trading with Sub-Saharan Africa. China is first (about $150-billion in 2018), then the European Union (EU) with the US in third place ($41.2-billion).

The Overseas Private Investment Corporation (OPIC), the US government’s development finance institution, has committed tens of millions of dollars to development projects in Africa, including the Connect Africa initiative.

The European Union Commission pledged to support the AfCTA with a €40-billion package that would attract investment and create jobs. The Africa-European Alliance for Jobs and Growth programme is intended to run from 2021 to 2027.

China’s multinational Belt and Road initiative includes a $1-billion African infrastructure fund and in 2018 aid to the value of $60-billion was delivered to the continent. The total value of Chinese investments and construction in Africa amounts to close to nearly $2-trillion since 2005 (American Enterprise Institute). McKinsey believes there are 10 000 Chinese businesses active in Africa.

All of this illustrates the importance of Africa to the world’s leading trading nations: it would suggest that a “race for Africa” is underway.

The roots of the AfCFTA can be traced back to the 1980 Lagos Plan of Action and a plan in 1991 to launch the African Economic Community. Neither of these were implemented but the goal remained alive.

The Southern African Development Community (SADC) was established in 1992 and the SADC Free Trade Area (FTA) came into being in 2008. The FTA covers 13 of the region’s 15 countries (Angola and the DRC have not signed) but only five countries are members of the Southern African Customs Union (SACU), Botswana, Eswatini, Lesotho, Namibia and South Africa. The SACU was formed in 1910.

Some of Africa’s Regional Economic Communities (RECs) have gone some way to achieving integration. Larger countries within an individual REC have tended to become a centre for trading, using the relationships they have with fellow members. Kamal Nasrollah, Partner and Head of the law firm Baker McKenzie in Casablanca, has studied this phenomenon and believes that the AfCFTA could use the example of these RECs. He cites Ivory Coast, Kenya, Senegal and South Africa and gives some detail on the Moroccan experience.

Writes Nasrollah, “Morocco is also an active trade hub within the Union du Maghreb Arab (UMA) trade agreement as well as the various trade agreements it has entered into with the US, the EU and the Francophone Africa free-trade zone (UEMOA).”

Although the AfCFTA has been signed, a range of complicated and detailed negotiations lie ahead. Topics include tariffs, service sector concessions and the exact outlines of rules of origin in each jurisdiction.

Visa restrictions for business travellers and financial systems that are not compatible are other potential hurdles.

In 2016 the Common Electronic Biometric African Passport was launched, and the AU produced a protocol on free movement of persons. Egypt, Nigeria and South Africa are among the countries that have not signed the protocol. The UN Economic Commission for Africa (UNECA) found that progress has been slow with respect to mobility (African Regional Integration Index).

African visitors need a visa when visiting more than half of the nations on the continent and only Ghana and the Seychelles make visas available on arrival. According to The Economist, “…it’s easier for Americans to travel around Africa than it is for Africans themselves…” and the AU passport has so far only been used for heads of state and AU officials.

Concerns about security and the perception that “people from other African countries are taking our jobs” will have to be addressed at national and local levels. South Africa has experienced outbreaks of xenophobia. Migration patterns will likely change if movement around the continent becomes easier.

A lot of work needs to be done to synchronise financial governance policies and to put better technology in place so that payments can take place across jurisdictions. Debt and deficit policies must chime.

The African Development Bank is supporting regional financial integration with programmes focussed on banking and financial standards and the African Peer Review Mechanism. Regional payment systems are being developed in each of COMESA, EAC, ECCAS, and ECOWAS. Other projects of the bank are the Africa Financial Markets Initiative, Making Finance Work for Africa and the Association of African Central Banks.

Possibly the biggest hurdle to seamless trading is poor infrastructure, but a great many projects are underway in every corner of the continent.

Among the initiatives of the Programme for Infrastructure Development in Africa (PIDA) is the West Africa Hub Port and Rail Programme, a regional hub-port, rail-linkage and port-expansion plan. Kenya’s $68-million Naivasha Dry Port project supports this plan.

The Southern African Development Community (SADC) has been active with multimodal projects such as the development corridors of Nacala, Maputo and Lobito (Zambia to Angola).

The Trans-Maghreb Highway in North Africa, the North-South Multimodal Corridor and the Central Corridor project are among other ambitious projects intended to provide inter-regional connectivity.

A recent research paper suggests that manufacturing will be one of the sectors to gain the most from the AfCFTA. According to “AfCFTA’s US$3-trillion Opportunity: Weighing Existing Barriers against Potential Economic Gains”, the dropping of tariffs between African countries will allow for the replacement of imported manufactured products, industrial machinery and transport equipment, which currently make up over 50% of Africa’s import basket.

The report, based on research done by international law firm Baker McKenzie and Oxford Economics, contrasts Africa’s export of raw material with this need to import manufactured goods. As a percentage of GDP, manufacturing averages 10% in Africa but the AfCFTA provides a chance for this to grow as markets open up. Improved infrastructure will further spur trade, and drive demand for more manufactured goods.

Another sector likely to benefit from the deal will be the services sector.

Countries with good infrastructure stand to benefit as efficient ports, airports and railway systems will be better equipped to deal with increased volumes of trade.

Article first published as a Special Feature by John Young in the African Business 2020 edition – the guide to business and investment in Africa.

More about trade and investment in Africa (e-book): 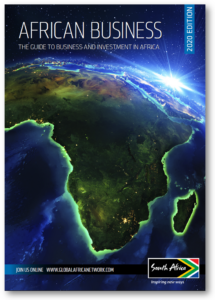 July 7, 2020
The project is seeking more private investors to invest in the second and third precinct.

July 6, 2020
The planned Zinc smelter in the Northern Cape will produce suphuric acid as a by-product, providing a greenfield opportunity for the establishment of the complete value chain.