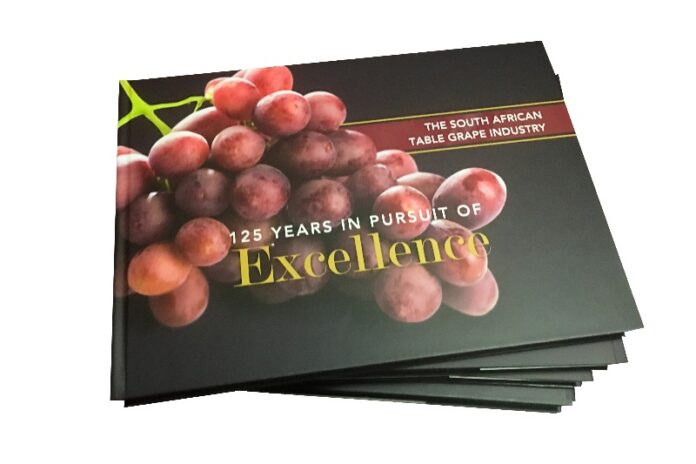 The book is authored by Fred Meintjes, who travelled across the country to all growing regions to capture the stories of where it all started for the table grape industry in South Africa.

The book was launched at SATI’s AGM held in the town of De Doorns, in the Hex River Region, on 23 May 2019. Table grape producers from across the country were in attendance as well as some of the affiliate companies of SATI such as the SAPO Trust, Fruit South Africa and Culdevco. Representatives from the National Agricultural Marketing Council (NAMC), Perishable Produce Export Control Board (PPECB), The Agricultural Research Council Nietvoorbij as well as exporters organisation FPEF were also in attendance.

Several table grape industry stalwarts or pioneers and those who’s families contributed to the growth of the industry over many decades across the five production regions were also in attendance.

Former chairpersons of SATI were honoured by receiving books, namely Johan van Niekerk as well as the father of the immediate past chairperson, the late Michael Laubscher who was represented by his father Kosie Laubscher, a veteran grower.

SATI Chairman Fanie Naudé warmly introduced guest speaker Prof. Eltie Links, former South African Ambassador to the European Union and Luxembourg. He was also appointed by former President Nelson Mandela as the chief negotiator of the SA EU trade agreement, which paved the way for the audience of table grape producers to benefit from the trade agreement.

A limited amount of these books were printed and are still available from SATI at R325 per copy (including VAT, excluding courier costs). Copies of the book can be ordered by completing the order form and sending it to info@satgi.co.za.