The experiences and insights from the past few years in the form of a Package of Plans adopted by the Atlantis SEZ will set future strategies and implementation plans into motion. 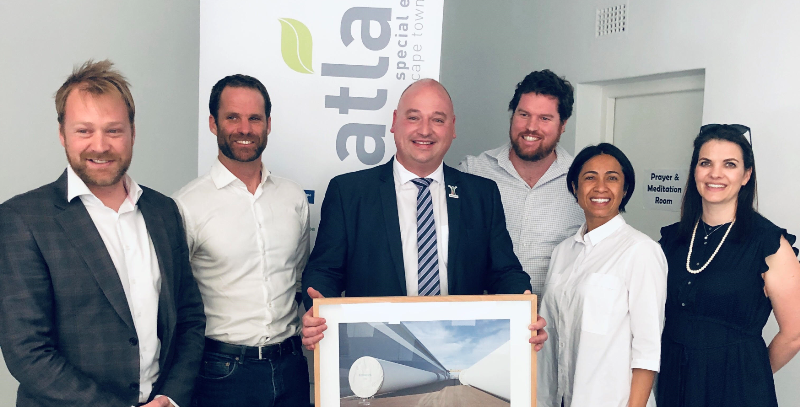 The Atlantis Special Economic Zone is the result of more than six years of collaborative efforts by the City of Cape Town, the Western Cape Government and the national Department of Trade and Industry (the dti). The designation sees the entire Atlantis Industrial area being declared a Special Greentech Economic Zone which allows the area to capitalize on the province’s already booming renewable energy and green technology sector.

Now, on the heels of its official designation in June 2018 and launch by Cyril Ramaphosa, Atlantis SEZ is celebrating yet another milestone. Wesgro has been appointed by the Western Cape Provincial Government to establish the registration of a Provincial Entity to meet the requirements of the Special Economic Zone Act, and the maturation of this entity to be able to transact and fullfil the aspirations set in the application for designation.

GreenCape Atlantis SEZ Project Executive Francis Jackson welcomed the project handover from GreenCape to Wesgro and stated that this shift would be taking the zone forward into the future: “GreenCape has been the appointed Atlantis SEZ project management unit since 2013, responsible for coordinating the application for designation. At the end of September 2019, we are celebrating more than 6 years of successful partnerships that have led to this milestone of a designated Atlantis Special Economic Zone for Green Technologies,”

During its appointment period GreenCape spearheaded the collaborative approach between the government tiers, and more than R700-million has already been invested in the Atlantis SEZ. Because of these investments, more than 322 new jobs have also been created.

Tim Harris, CEO of Wesgro also stated the collaborative nature of the Atlantis SEZ is what has helped make it such a successful entity: “[It] has been the secret to Atlantis punching above its weight in investment promotion, skills development and enterprise development, leveraging an ecosystem of aligned entities in such a way that the sum impact is greater than the parts.”

With the baton now being handed over, the experiences and insights from the past few years in the form of a Package of Plans adopted by the Atlantis SEZ will set future strategies and implementation plans into motion. All of which have been drawn on the foundations set in the strategy drafted by Deloitte in 2015, and an update to elements of the strategy compiled by Nova Economics in 2018. On a more practical level, Atlantis SEZ will be moving into a new office space to keep the momentum going and continue to collaborate to create a greener economy for the Western Cape and the rest of South Africa.