Macadamia nut production in Mpumalanga is expanding every year

About 4 000 hectares of new trees is added each year across South Africa, with most of that in Mpumalanga and neighbouring Limpopo. 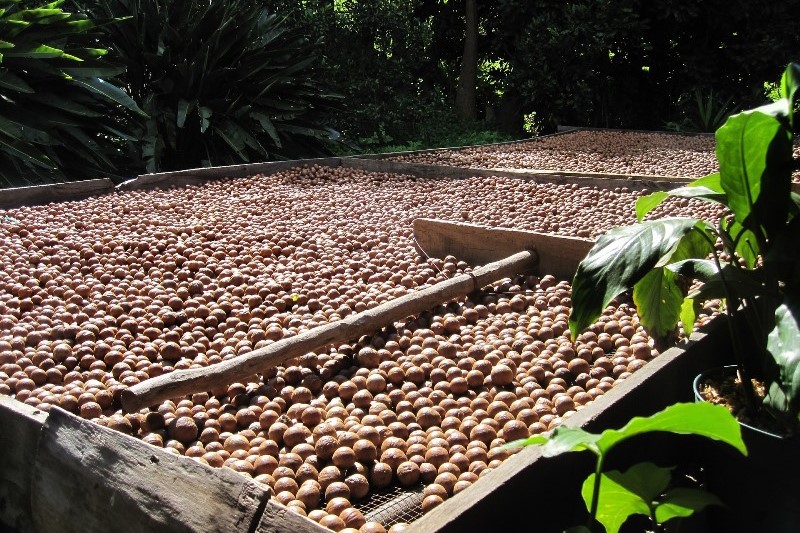 Agriculture is responsible for about 3.4% of Mpumalanga’s Gross Domestic Product (GDP). Fruits, nuts and vegetables are a major contributor to the provincial and national export
basket and there is still scope for expansion in this sector, both in terms of lands planted and downstream beneficiation.

The Provincial Government of Mpumalanga is building an International Fresh Produce Market as a means of stimulating agricultural production. The intention is that this will lead to increased volumes supplying domestic and international markets. Each of the province’s districts will have Agri-parks and the Department of Rural Development has set up Farmer Production Support Units in two municipalities so far, Bushbuckridge and Nkomazi. A feedlot has been built at Mzinti and a R20-million packhouse in Bushbuckridge is almost ready for use.

Other interventions include the re-commissioning of the Bushbuckridge poultry abattoir and farmer support to soya and maize farmers to supply the Lekwa Oilseed Crushing Plant in Standerton. The Nooitgedacht Research Farm is being upgraded and the possibility of reopening an agricultural college is being considered. Marapyane Agricultural College, which is situated in the Dr JS Moroka Municipality in Nkangala, would allow for a formal setting for the transfer of skills.

Macadamia nuts have grown in popularity exponentially in recent years. About 4 000 hectares of new trees is added each year across South Africa, with most of that in Mpumalanga and neighbouring Limpopo. The vast majority of the nuts are exported, with about 40% going to China.

Mpumalanga accounts for about 21% of South Africa’s citrus production and a third of its export volumes, with Valencias being the province’s most popular varietal and Nelspruit being the centre of the sector. Avocados, litchis, mangoes and bananas thrive in the province. Hazyview is an important source of bananas, with 20% of South Africa’s
production originating in this district. Deciduous fruits are cultivated in smaller quantities. The village of Tonteldoos north of Dullstroom hosts an annual peach festival that includes
liquid marvels such as peach mampoer. About 15 000 tons of table grapes are produced in the province annually and Mpumalanga produces its own wine.

A specialist fruit that does well in the province is the marula. The marula fruit makes a popular beer and is used in the production of a liqueur that has done well on the international market. Potatoes and potato seed thrive in Mpumalanga’s fertile soil, with one operation in the higher reaches of the Drakensberg range producing more than 2 000 tons of seed every year. Tomatoes, onions and cabbage are also farmed profitably.

Cotton is grown mostly under dryland conditions in Marble Hall. The province has 1 500 ha of dryland under cotton. Much of South Africa’s total annual production of about 34-million kilograms of tobacco, especially Virginia tobacco, takes place in the north-western parts of Mpumalanga, and in neighbouring Limpopo. Other crops produced for export in Mpumalanga include cut flowers, pot plants and nursery plants.

About 14% of the province’s land area is natural grazing land. Products include beef, mutton, poultry, dairy and wool. Poultry-production companies have large facilities in the Standerton-Volksrust area. The town of Ermelo is the centre of one of the country’s most important sheep-farming districts.

The province is home to one of South Africa’s largest pig farms, Kanhym, near Middelburg. Karan Beef has recently built a large abattoir in Balfour to service its massive feedlot in neighbouring Gauteng. Up to 1 800 head of cattle can be processed every day at the facility.

Mpumalanga has the second biggest sugar industry in South Africa, after KwaZulu-Natal.
TSB Sugar runs three mills in the Lowveld region, two of which have refining capacity,
and employs about 4 700 people. More than 1 400 farmers (commercial and small-scale) deliver sugar cane to the company. TSB brands are Selati (sugar) and Molatek (animal feed). TSB’s three mills (including Pongola in northern KwaZulu-Natal) have been able to maintain volumes because of extensive irrigation schemes. The company was bought by RCL Foods in 2014. TSB Sugar has been increasing the amount of cane it takes from
community trusts and small-scale growers. The proportion of land used to harvest cane from small-scale growers on community land has grown to 15%, with 64% coming from commercial farmers and community trusts and 21% from TSB’s own land.

Fresh fruit and nut supplier Halls has developed a countrywide reputation since it was incorporated as a company in 1921. Halls’ Mpumalanga operation (Mataffin) produces an avocado crop of about 1 300 tons, 37% of the company’s output. Europe buys most of Halls’ 1.6-million cartons of exports (4 kg equivalents) and this represents about 60% of
production. The company is one of South Africa’s biggest exporters of litchis and total production is about 850 tons in a good year.

Halls cultivates 375 ha of its own land and has another 1 400 ha under management. The Matsafeni Trust is the company’s biggest outgrower and exports in the region of 300 000 cartons every year.

Westfalia is a diversified agricultural group which runs extensive operations in the province.
The group’s South African operations regularly sell more than five-million cartons of avocados (50% of the country’s export volume) and seven-million cartons of mangoes. Westfalia is a subsidiary of the Hans Merensky Group and most of its holdings are in the neighbouring province of Limpopo.

Umbhaba Estates is one of the biggest banana growers in the province. The drier Highveld region with its cold winters supports crops such as cereals, legumes and nuts. There is extensive irrigation in the Loskop Dam area. Ermelo in the centre of the province is one of South Africa’s main centres of sheep farming and wool-production.

Standerton in the south-west is a dairy centre and Piet Retief in the south-east concentrates on sugar and tropical fruit. Subtropical fruit flourishes in the Lowveld with the town of Nelspruit being a major citrus producer. Mangoes, avocados, pecan and macadamia nuts, bananas and papayas also thrive.

The Subtropical Fruit Growers’ Association represents about 400 avocado growers. Subtropical fruit altogether has a combined turnover of R950-million and employs about 13 000 people. Mixed farming and potatoes, sweet potatoes and beans are mostly found in the southern and western parts of the province. Between them, the highlying areas of Mpumalanga and the Free State account for 40% of South Africa’s potatoes.

Image by Joseph Hill from Pixabay