HomeCompany NewsPutting North West on the road to growth

Putting North West on the road to growth

SANRAL and Rustenburg Rapid Transport are investing in infrastructure.

Two major transport projects in the North West will create conditions for better mobility to and from the province and within its principal city. The South African National Roads Agency Limited (SANRAL) opened the R512 Pampoennek road in September 2020 and the elements of the Rustenburg Rapid Transport scheme are coming together to promise enhanced movement around the province’s most populated urban centre.

The R512 connects the towns of Brits in the North West and Randburg in Gauteng via Hartbeespoort, providing a good connection to the N4 highway. The cost of the road project through Pampoennek was R377-million and the road was opened by Transport Minister Fikile Mbalula.

“This road gives expression to the notion that transport is the heartbeat of the South African economy, playing an integral part in the country’s economic growth. Roads are an essential part of South Africa’s transport system and are important infrastructure to enable economic activity and access to social amenities,” said Mbalula at the ceremony.

SANRAL is currently working on other roads in the North West, including the N14 and N12 highways. SANRAL’s Horizon 2030 strategy aims to ensure that local communities benefit when roads are built in their areas. Construction of the Pampoennek route generated 209 permanent jobs for locals with R27.4-million spent by August 2020. About 180 people were offered training and 12 subcontractors were employed on the project.

Rustenburg is one of the fastest-growing cities in South Africa. With a population of more than 500 000, city planners have turned their attention to improving the quality of life for commuters through an integrated and intelligent public transport system.

Rustenburg Rapid Transport (RRT) aims to manage and allocate road space more efficiently, to reduce the number of vehicles on the road and ultimately to provide a better user experience for people using public transport and for people working and walking in the inner city. 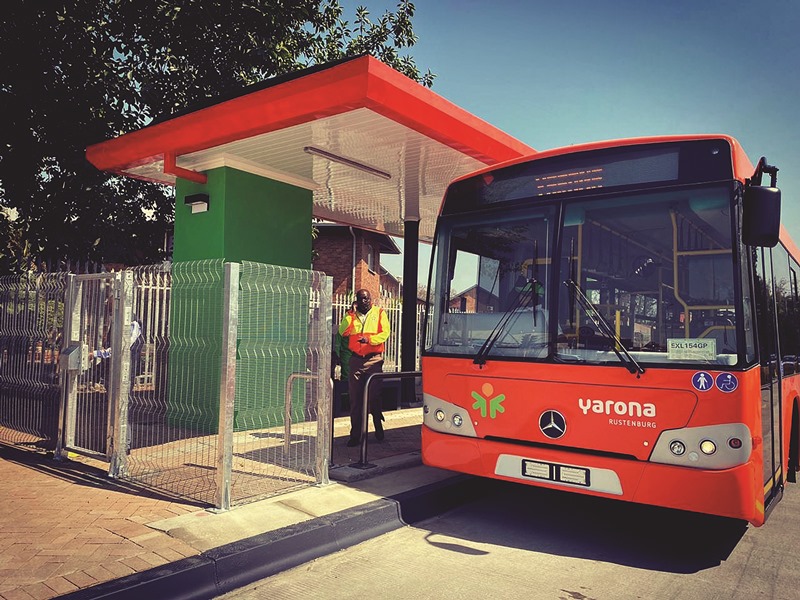 Bus Rapid Transit (BRT) is one of the elements of the RRT system. There are two main BRT corridors where passenger volumes are high. The corridors will have dedicated bus lanes with walkways and stations which allow for easy access.

The RRT system is designed to cater for up to 75 000 commuters daily when operating at full capacity. Construction of the RRT project’s road network has begun and various other projects have been undertaken related to the project, including traffic lane upgrades and the installation of dedicated traffic lights and signals. Cycle lanes and walkways for cyclists and pedestrians have been constructed to complement the RRT system.

In June 2020, the Rustenburg Local Munici-pality welcomed the first Yarona Bus at a session held at the Rustenburg Civic Centre. The RRT project will begin with a testing and training phase and the first bus will be used by the Rustenburg Rapid Transport team to train drivers, and test various infrastructure components including stations and priority traffic lights in a build-up to the main launch. 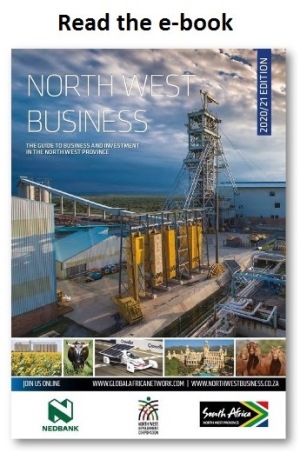 The Rustenburg Rapid Transport programme forms part of the road-based component of the national Bus Rapid Transport Strategy, overseen by the National Department of Transport. Its goal is to ensure swift movement of large numbers of people between parts of a city in a quick and safer way.

The local taxi industry has been working closely on the programme and affected taxi operators will create and run a bus-operating company (BOC). Several milestones have already been reached in this sphere, namely the creation of Taxi Negotiating Forum and the signing of a Memorandum of Agreement.

There are further plans for public transport to become more integrated in the future. This might involve co-branding and a single fare system.

On the topic of regulation, Executive Mayor Mpho Khunou says that a “fully-fledged transport entity” is being discussed for the future. “As things stand, the only people who will participate in this new system are going to be those who are affected,” says Khunou.

“The idea moving forward is to involve other parts of the industry, then you can then regulate all forms of transport in the city. That is something we are looking in to that will happen a bit further into the future.”