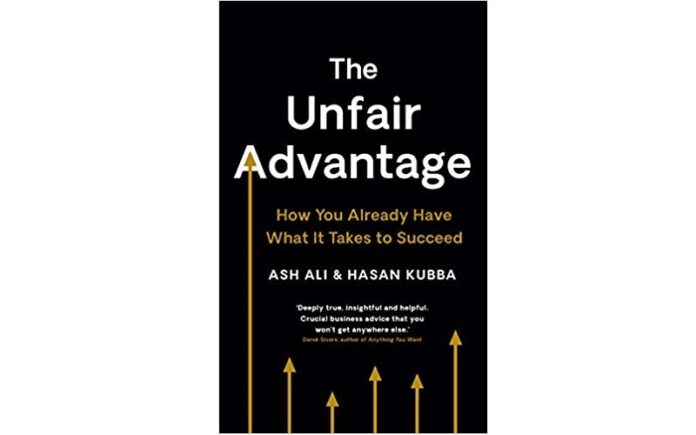 Life’s not fair, starting a business is not easy, but we can show you how some of the unfairness of life is in fact tilted your way and that will help you in your business venture. That’s the essential message that two successful entrepreneurs get across in The Unfair Advantage. How You Already Have What It Takes to Succeed.

The book’s title gives a good indication of the authors’ style, straight-forward, what-you-see-is-what-you-get. Any words that might be new to general readers from the fields of economics or entrepreneurship are briskly explained (in brackets) and the writing is clear and free of jargon. There are no attempts to come up with catchy aphorisms although there are some strong instructions like “show up” and “be coachable”.

Ali and Kubba astutely integrate their own experiences throughout the text and they pull no punches about how unfair the landscape is. Where you were born and who your parents were goes a long way to determining what chances you are going to have in life. Some people are more talented than others and then there’s luck. Racism, sexism and other forms of discrimination exist. The British authors don’t only puncture the myth that they live in a meritocracy, they think that believing such a thing to be “dangerous because it imbues value-judgement, a sense of ‘deservedness’ to people’s position in life”.

There’s no point moping, though, and Ali and Kubba are convinced that everyone has some kind of “unfair advantage”. The chances of successfully starting a business are massively increased, they argue, “by finding and leveraging your unfair advantages”.

They offer a kind of auditing system to help the reader find his or her unfair advantage. Under headings like Money, Location and Luck and Status, they guide the reader through all the areas where some point of advantage might give you a headstart on the opposition. It might be a particular skill set you have; it could be your life experiences. The list is not limited to where you were born or what university you attended.

The Unfair Advantage is clearly aimed at readers in a developed economy. Digital access is assumed (“learn to code”) and the method of presentation sometimes tires: we read of the problem, it’s defined by an authoritative study, we are given an example (often a titan such as Gates, Buffet or Jobs) before the chapter is tied up with a solution.

Several books are quoted in the text but there is no bibliography. Nor is there an index, and why are the new words that are explained so well in the text not gathered together in a glossary? These problems aside, The Unfair Advantage would be helpful for a wannabe entrepreneur. There is no sugar-coating the difficulties ahead, but there’s hope if you know what you have.