Green Hydrogen can help the global transition to cleaner energy

The global move away from carbon fuels presents several opportunities for Africa. Africa has the minerals, the wind and the sunshine that the world needs.

Green hydrogen is increasingly being seen as the ideal way for the world to transition away from carbon fuels to cleaner energy. Africa is rolling out many new renewable energy projects – the International Energy Agency (IEA) predicts that Africa’s renewable energy capacity could reach 310 GW by the year 2030 – which are answering the needs of African citizens for more access to energy and which also show the enormous potential that the continent has for renewable energy.

Some estimates put the continent’s potential for renewable power generation at 1 475 GW, but with most rivers untapped and almost endless supplies of strong sunshine and steady wind, it is difficult to put a figure to the real opportunity that exists to generate power from natural resources.

AEW points out that developments on this scale “could be used to create competitive green hydrogen markets”.

Hydrogen is generated via the electrolysis of water using electricity. If renewable energy is deployed to make the electricity that makes the hydrogen, then that is “green hydrogen”.

Hydrogen has a wide range of uses across multiple sectors, from transport to heat generation and power. In South Africa, Anglo American is running a project to power its trucks with green hydrogen. In 2012 Anglo Platinum launched an underground locomotive powered by a fuel cell.

f renewable energy is deployed to make the electricity that makes the hydrogen, then that is “green hydrogen”.

Finding new uses for platinum is one of the new priorities exercising the minds of the leaders of the mining industry as it moves to adapt to a world which is moving away from fossil fuels. Platinum coating greatly enhances the hydrogen absorption capacity of fuel cells.

In 2016 Impala Platinum Refinery unveiled a fuel cell forklift and a hydrogen refuelling station in Springs. Research at that facility is ongoing. The head office of the Minerals Council South Africa in Johannesburg is powered by 40 ounces of platinum and natural gas, South Africa and Africa’s first baseload installation.

The editor of the respected Mining Weekly publication, Martin Creamer, has published a series of articles and editorials extolling the virtues of what he calls the “best of two new carbon-reducing technology worlds”.

Creamer notes that South Africa’s abundant supplies of platinum group metals (PGMs) and manganese ore can make the country a leader in battery electric vehicles (BEV) and fuel cell electric vehicles (FCEV). He further points to the work being done by Hydrogen South Africa (HySA) at three universities and the Council for Scientific and Industrial Research (CSIR). South Africa’s good supplies of sunshine and wind make it ideally suited to generate hydrogen and if the country could capture 25% of the world market, it would be worth $600-million.

South Africa’s good supplies of sunshine and wind make it ideally suited to generate hydrogen and if the country could capture 25% of the world market, it would be worth $600-million.

What applies to South Africa, naturally applies in an even greater degree to Africa as a whole. A structure has been created for the development of hydrogen on the continent, the African Hydrogen Partnership Trade Association (AHP), which is incorporated as a non-profit company in Mauritius. Two member companies are Anglo American and the Port of Rotterdam. 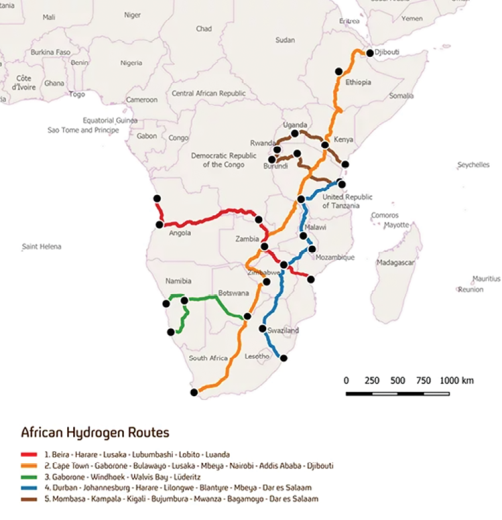 The AHP argues that Africa is uniquely well-suited to achieve a green hydrogen technology revolution because: the region is not locked into old energy technologies; African governments have the power and flexibility to kickstart such a development in a very short time; national hydrogen energy plans can be developed from scratch in the region; African governments are already proactively and decisively supporting environmental policies (Ethiopia’s green policies, for example); there are unlimited natural resources for producing low-cost green electricity and green hydrogen; and a rapidly growing, young population demands innovative green energy concepts.

AHP wants to see power-to-gas renewable energy hubs all over the continent and has developed a map to show the proposed routes (above). The AHP website states:

Namibia is making concrete moves to introduce hydrogen as a new economic sector.

The country has a high proportion of land allocated to national parks, one of which also happens to be one of the top five sites in the world in terms of the combination of wind and solar resources and its proximity to sea and land routes for export.

The Tsau //Khaeb National Park is where a vertically integrated green hydrogen project will start producing either pure green hydrogen or in its derivative form, green ammonia, from 2026. HYPHEN Hydrogen Energy, the company which won the bid to run the project, says that it will create 2GW of renewable electricity generation capacity in the first phase at an estimated capital cost of US$4.4-billion. Expansion phases in the late 2020s will increase the total investment to more than US$9-billion and increase combined renewable generation capacity to 5GW and electrolyser capacity to 3GW. The goal is to produce 300 000 tons of green hydrogen per year.

Namibia has already made plans for where this hydrogen will go, having been in talks with both German and Netherlands entities. The Port of Rotterdam anticipates that 20-million tons of hydrogen will pass through its facilities annually by the year 2050.

The Namibian Ports Authority (Namport) and the Port of Rotterdam have signed a Memorandum of Understanding (MoU) to collaborate on various areas of mutual interest, including positioning the ports to become green hydrogen export hubs and how best to facilitate the forecasted growth and flow of the green hydrogen supply chain from Namibia to Rotterdam in the Netherlands.

The Port of Rotterdam anticipates that 20-million tons of hydrogen will pass through its facilities annually by the year 2050.

Namport has allocated 350 ha of land at the Port of Walvis Bay North Port for allocation to businesses related to green hydrogen. This might include an electrolyser or factory that produces the green hydrogen as well as the factory that converts the hydrogen into ammonia. These facilities will need to be close to a port to keep costs down.

In addition to the plans for Walvis Bay, the planned new deepwater port of Luderitz at Angra Point now takes on added significance. Studies done in relation to the project will be revised to take into account the potential for green hydrogen export as an additional factor.

The governments of Germany and Namibia signed a Joint Communiqué of Intent to establish a German-Namibian hydrogen partnership in 2021. The European country’s Federal Research Ministry will provide up to 40-million euros in funding as part of the partnership. European countries are under pressure to find alternative to carbon-based fuels.

Germany has a National Hydrogen Strategy 2020, part of which is to establish partnerships across Africa. One of the most ambitious is the H2Atlas-Africa project, a joint initiative of the German Federal Ministry of Education and Research and several Sub-Saharan African partners. The project’s goal is to produce 165 000 TWh of green hydrogen annually in West Africa across multiple sites.

Other countries where Germany is active is in the Democratic Republic of the Congo, South Africa and Morocco.