In line with eThekwini Municipality’s commitment to reduce its carbon footprint and use natural energy to produce electricity, the City launched its Solar Photovoltaic (PV) project at the Ushaka Marine World Theme Park on 25 January. 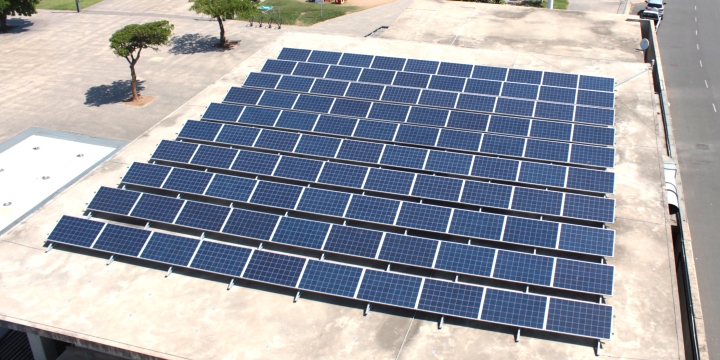 The project has seen the installation of Solar PV panels on five Municipal buildings as a pilot project that aims to promote the use of embedded rooftop solar PV generation in eThekwini and reduce the dependence on the national energy grid. The project also serves as an example for the private sector and other municipalities to learn from.

EThekwini Municipality, as a leader in climate change mitigation and adaptation projects, launched the project to also provide opportunities for learning about PV installations. The project will allow for learning around various aspects such as electricity generation profiles at different times of the day and year of the various technologies and sizes, quality control, monitoring and evaluation of electricity. The lessons learnt will feed into policy development to expand the number of renewable energy installations in eThekwini.

“Such installations go a long way in furthering awareness on the benefits of renewable energy. In the long term, the city hopes to expand the programme and hopes that residents and more business will take up the use of renewable energy that will place out city on a truly sustainable path,” she said.

Project Manager Sbu Ntshalintshali said the pilot installations are expected to save the City 426.75MWh a year.

“This translates to R337 396 in the first year alone. It is expected that the benefits will rise incrementally as time goes by. This project will allow the Municipality to test its own policies and practices,” he said.

The installation at uShaka Marine World Theme Park boasts the largest installation of solar PV with a capacity of 165.4MWh per annum. Other building installations include the Moses Mabhida Stadium Sky Car, People’s Park restaurant, Metro Police Headquarters and EThekwini Water and Sanitation Customer Service Department. The energy generated by the solar PV System is consumed by operations of the said buildings resulting in energy saving by reducing building energy demand. Metro Police, Sky Car, People’s Park and Water and Sanitation Department are expected to save 137.4MWh, 6.84MWh, 40.43MWh, and 76.68MWh respectively in a year.

How the system works

The Energy Office Solar (EOS) project consists of roof-top mounted solar photovoltaic (PV) panels which are made up of cells that convert sunlight to Direct Current (DC) electricity. The DC power is converted to Alternating Current (AC) by inverters and the AC power is used on electrical equipment/loads within the buildings. The system is a grid-tied system with no batteries, meaning any power produced by solar panels subtracts from what the buildings are using from the grid/EThekwini Electricity. This is achieved by specialised and advanced inverters.

The project aligns with Plan Eight in the City’s Integrated Development plan which aims to create a financially accountable and sustainable City. Renewable energy programmes such as these, aim to decrease the dependence on the national electricity grid and facilitate market transformation in the energy sector.