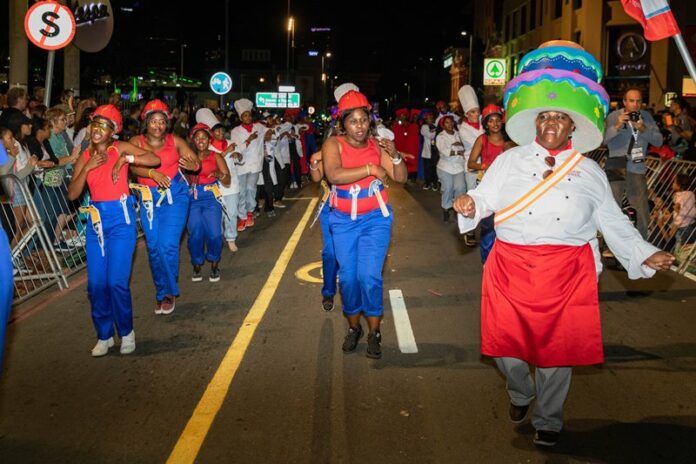 Participating in the Cape Town Carnival this year was a first for False Bay TVET College. Each year the carnival brings the Mother City together under a vibrant new theme. This year’s theme was “VUKA UKHANYE: Arise and Shine!”.

Depicting a vivid journey of awakening, owning your power and believing in your ability to make a difference is the same message False Bay TVET College instills in their student community.

There is a critical skills shortage in the country and the False Bay TVET College mandate is to train youth in mid-level skills so that they are equipped to participate as active citizens in the economy and create better futures for themselves and their families. “Through our participation in the Carnival we wanted to show the youth of Cape Town the energetic and fun side of career paths that False Bay TVET College offers. Rise and Shine with education! FOR A BRIGHT FUTURE!,” said Colleen Brennon, Marketing Manager for False Bay College.

False Bay TVET College has five campuses, serving residents in the geographical area known as the South Peninsula as well as the previously disadvantaged communities of Mitchells Plain and Khayelitsha. The student demographic includes all race groups in the Western Cape. Our students come from diverse backgrounds and experiences, often difficult situations.

The shared goal of participating as a unit, representing the very best of our college as a student body exemplifies greater social cohesion. There were inequalities, disparities of ethnicity, gender, class, disability or even age. The oldest participating team member was 57 years young. The students were afforded an experience that they will treasure forever. They were transported and touched a place called hope.

Students and participating staff were dressed to portray a selection of the College study fields. Ranging from Chefs, Engineers, I.T. technicians and Graduates in flowing gowns and tasseled caps to illustrate the success and outcome of a chosen study field. Mrs Khedama, Hospitality lecturer at Khayelitsha Campus, adorned with her Cake Hat had the audience eating out of her hand as she waltzed like a celebrity down the fan walk.

The students danced their way down the forty thousand plus fans crowding the streets, among 54 other performance groups to the dance track LEVEL UP, behind the official KFM sponsors float.

While the College had no float, the College bakkie was “pimped” out in carnival flare with a supersize, hammer and wrench, to chariot the College most- loved Mascot, Mo the Graduate Emoticon. The crowd cheered as the College procession passed, reaffirming the brand promise amongst the young and old, My dream, My college.

“Fantastic Concept you brought to the Carnival, False Bay College. Let it be known that you were the first Higher Education Institution to be part of Cape Town Carnival.” Said Mr M.S. Ruiters, President of the Western Province Marching Association.