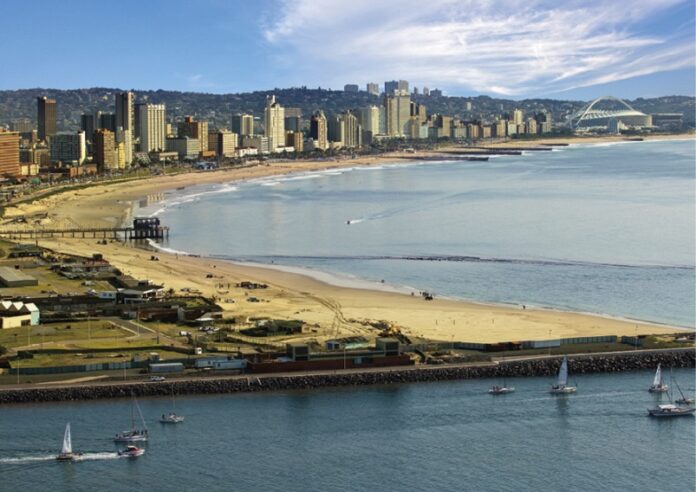 The R300-million beachfront promenade extension is a catalyst to the R35-billion Point Waterfront development to be undertaken in three phases over five to ten years.

The sod turning ceremony signalled the official commencement of the Beachfront promenade extension which is expected to be complete in June 2019. This promenade extension will unlock phase one of the Point Waterfront that will include hotel, shopping centre, offices and residential.

The entire Point Waterfront project, which is a public-private-partnership venture, is expected to create 11 000 jobs during the construction phase per annum and provide an estimated 6,750 permanent jobs after completion.

Mayor Gumede said: “It is encouraging to note the growing interest from the business sector to work with government in major strategic investments.”

She said the Point Waterfront will completely change the landscape of Durban and position it as a global City and boost tourism profile. “Cities are viewed as critical economic nodes and as stable to attract investment.”

Furthermore, because of this development, the City is expecting that local existing property values in the area are likely to increase by approximately 10 percent and the overall central business district property values are to rise by 5 percent.

Also, upon completion, rates revenue to be generated for eThekwini will amount to over R200-million per annum.

“The Point Waterfront development must be seen in the context of a city-wide development process, indicating that Durban is on the brink of change,” said Mayor Gumede.

She further mentioned that the overall national public revenues that may be derived from the revised development through the various tax mechanisms could amount to an additional R1.7-billion.

“We are also anticipating that this economic activity will generate billions of rand in the gross domestic product contribution,” she added.

City Manager, Sipho Nzuza said when he started his tenure in eThekwini, he vowed to fix the development bottlenecks in order to attract foreign investment as they have proven to be the key driver for jobs and growth.

“To sustain this development that will contribute significantly to growing the tourism profile which is one of eThekwini’s identified growth sectors, we have invested in the Urban Inner City Renewal Programme,” he said.

Nzuza described the Urban Inner City Renewal as a watertight programme aimed at ensuring safety and cleanliness around the inner City. This will restore investor confidence and enable us to further stimulate investment from business.”

“As the Municipality, we remain committed to the inner city master plan to radically uplift and enhance the CBD of Durban to enhance our global appeal to both tourist and investors,” he added.

Nzuza further mentioned that their hard work is contributing immensely towards achieving the City’s vision of being Africa’s most liveable City. “This vision will be achieved by growing the economy and meeting people’s needs which we are currently doing.”

Soban Bavarah, an international investor from Malaysia, who is behind the Point Waterfront development, thanked the Municipality for its commitment to ensure this development takes off and continues to grow.

“The Beachfront promenade extension will not only support the Point Waterfront development but will also benefit beach goers and general public,” he said.