A number of tourism investment packages are available to interested investors in the Northern Cape. 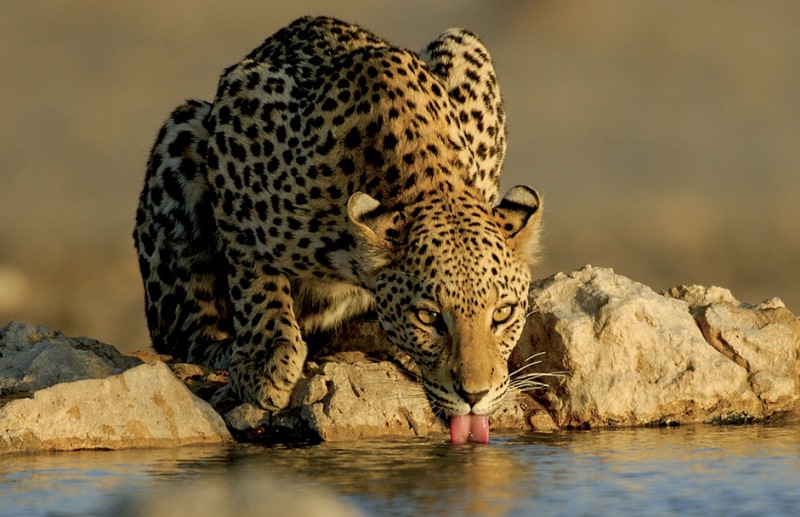 As the major investment in new tourist accommodation by the Country Hotels group shows, the Northern Cape offers a good business proposition for tourism.

The Northern Cape Department of Economic Development and Tourism (DEDAT) has prepared a number of tourism investment packages and is looking for partners to take these opportunities to completion:

To discuss any of the above opportunities, please contact the Northern Cape Department of Economic Development and Tourism. 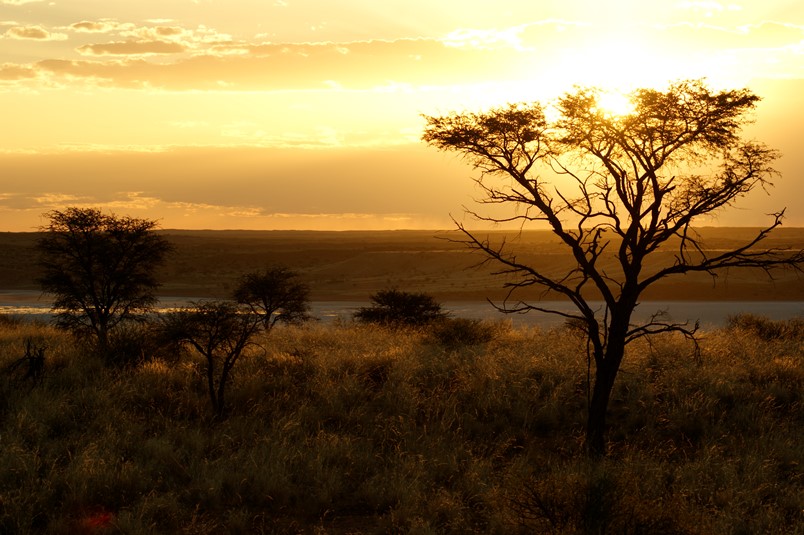 The Northern Cape Provincial Government Growth and Development Strategy targets tourism as one of the key sectors with the capacity to “grow, transform and diversify the provincial economy”. The sector’s direct contribution to provincial gross domestic product (PGDP) is about 6%.

In addition to events, attention is also being given to the potential of niche tourism, a sector that is growing fast. Assets unique to the Northern Cape include a large number of arid areas (for lovers of deserts and desert life) and very clear night skies (for sky-gazers, a niche that already exists but has tremendous potential to expand).

There are no fewer than six national parks in the province, each showing off distinct geographical and biological features with trees such as the elephant’s trunk and the quiver tree proving endlessly fascinating to visitors. Most of the province lies in the Nama-Karoo Biome and the annual display of spring flowers is quite spectacular.

Although the tourism offering is already well developed and there has been considerable investment in infrastructure in recent years, the potential for the Northern Cape to capture more of the domestic and international tourism market is immense.

Country Hotels recently invested heavily in the province, noting the upsurge in demand for beds driven by the province’s concerted drive to attract more tourists – and the pressing need for accommodation on the back of investments in the mining and renewable energy sectors, particularly new solar plants.

Spanish and Chinese engineers are now a common sight in Northern Cape towns, to such an extent that local supermarkets are having to source spices such as saffron for fragrant paellas.

R40-million has been invested by Country Hotels in the new Kathu Inn and R50-million will see the Springbok Inn become a smart 100-room hotel with a further 250 beds available in a backpackers’ lodge and 25 sites available at an associated campsite. The Orange River Rafting Lodge has an obvious purpose, while the Namastat Lodge and Caravan Park caters to travellers on the N7. What used to be known as the Hantam Hotel in Calvinia is now the refurbished Calvinia Hotel and Tankwa Lodge, offering 25 air-conditioned rooms and easy access to flower-spotting and the Tankwa Karoo National Park.

The province’s tourism strategy targets adventure tourism (4×4 trails, hiking, river-rafting) and desert tourism, which includes the stark delights of the Kalahari and the Richtersveld. 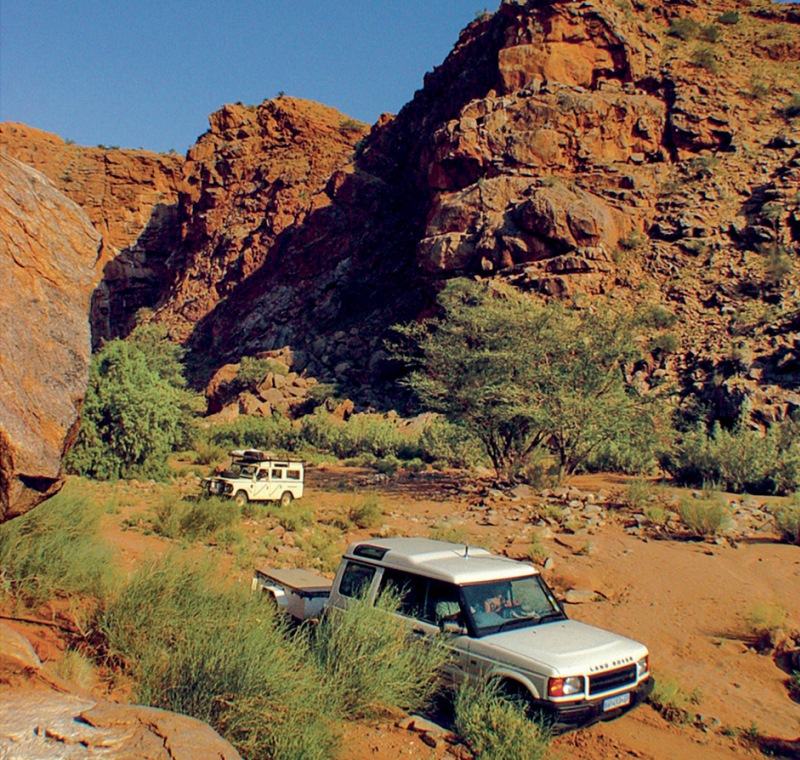 The Northern Cape Tourism Authority (NCTA) has increasingly been focusing on adventure sports (with a brand of “Northern Cape Extreme”) and the organisation and promotion of events, including festivals.

The Tankwa Karoo Mountain Bike Challenge, which traverses the southern part of the Great Karoo from Ceres to “star-gazer’s Central” at Sutherland, is a 240 km marathon that typifies the type of adventure tourism of the province’s brand.

The Northern Cape is a nature-lover’s paradise. It has five provincial reserves and six national parks, a stunning variety of landscapes and endless potential for adventure tourism, hunting, and observing stars, rock paintings and flowers. Diamond fields, diverse cultures, battlefields and the Orange River are some of the province’s other major assets.

The decision by UNESCO to inscribe the Richtersveld Cultural and Botanical Landscape as a World Heritage Site (South Africa’s eighth) has great significance for the tourism industry in the Northern Cape, and for the prospects for ecotourism in general. This 160 000-hectare landscape of mountainous desert is managed by the semi-nomadic pastoral Nama people.

The Richtersveld Transfrontier Park achieved a major international accolade when it was included in the Rough Guide’s Top 10 for 2016. What is more, this was the only spot in Africa to be showcased in this way.

Although the park is very dry it also receives mists off the Atlantic Ocean and sustains almost 30% of the succulent plants in South Africa. The Verreaux eagle is a prized sighting for bird-watchers and many other mammals survive these harsh conditions such as the black-backed jackal, Hartmann’s zebra, duiker, klipspringer and leopards. However, the stark landscape is the ultimate attraction of this park, which straddles the Orange River.

The 2012 opening of the 2 500-seater Mittah Seperepere Convention Centre (below) was a boost to the Northern Cape events and conferences industry. It is located in the centre of Kimberley, near the Big Hole. With the town’s biggest hotel situated in the same precinct, the Convention Centre it makes it much easier to sell the provincial capital as an ideal meetings, incentives, conference and events (MICE) destination. 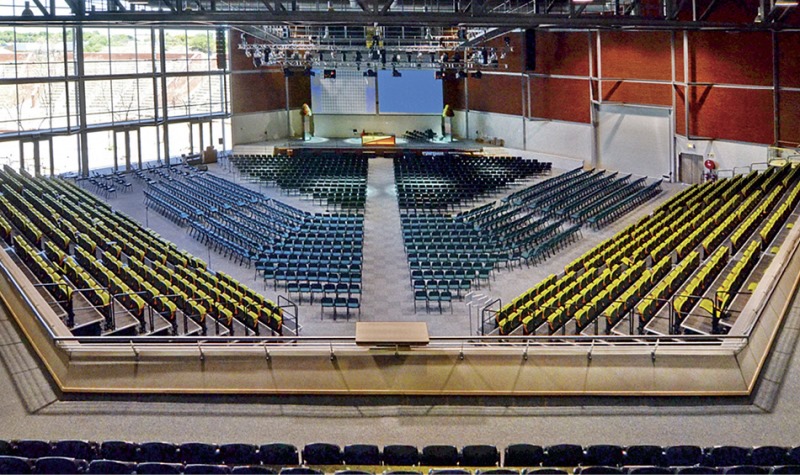 Progress in that field was evidenced when Kimberley was chosen to host the 7th International Wildlife Ranching Symposium in late 2011, with delegates from 20 countries present. The Northern Cape is a very popular hunting and wildlife-ranching destination.

The Northern Cape has its fair share of annual festivals. AfrikaBurn is now a regular in the Tanka Karoo National park, attracting alternative types who are determined to “chill” in the heat.

The Vleisfees (meat festival) has been held in Calvinia in the heart of the Hantam region since 1990, and this is where the consumption of vast quantities of lamb and mutton compete for the attention of festival-goers, along with a vintage car rally and a Miss Vleisfees competition. Richmond has a festival called Boek Bedonnerd—a phrase that is not easily translatable, but which suggests that attendees are really excited about books! Kimberley’s Gariep Arts Festival is gaining a reputation as the venue for outstanding performances and events. Upington’s Kalahari Kuier (Visit) Festival has outgrown its focus on the raisin, and has since become all-encompassing festival that includes a popular race, the Kumba Iron Ore Classic. More than 30 000 people have been known to attend the event, providing a welcome boost for the local economy.

The province is divided into five tourism regions, which coincides with the boundaries of the district municipalities.

The north-western portion of the province is known as the Green Kalahari, much of which is taken up by national parks. The Kgalagadi Transfrontier Park (with Botswana) encompasses 3.7-million hectares, making it one of the biggest conservation areas in the world. The Red Dune Route is a network of guesthouses, reserves and farms to guide the visitor to the great park, offering country hospitality and hearty food along the way.

The first Green Kalahari Canoe Marathon attracted 45 paddlers over three days in 2012. The marathon was held over a 99 km course.

The Orange River provides the lush landscape in which the grapes of the several hundred producers of Orange River Wine Cellars prosper. The rushing waters of the Augrabies Falls National Park provide another popular attraction.

The Kalahari in the north-east is home to many of the province’s biggest mines, but also to great numbers of raptors, vultures and owls. A specialist raptor route has been developed. Birders can look out for 50 species, including the Booted Eagle, the Pygmy Falcon and the Bateleur. Tours of the area’s vast open-cast mining operations can be arranged. Hunting is a lucrative subsection of the tourism sector that is proving extremely popular in this region. The Roaring Kalahari Route guides tourists to out-of-the-way towns to experience real life and to bring economic development to rural areas, at the same time giving a real sense of the size of the wilderness area.

The Diamond Fields region contains the spectacular Big Hole (below), the Mokala National Park and many Anglo-Boer War battle sites. The Anglo-Boer War Route is a well-developed tourist attraction. The town of Kimberley is itself an extremely popular attraction and offers fine examples of Victorian architecture. 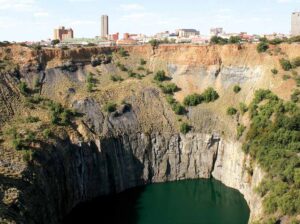 The Karoo region encompasses the south-eastern portion of the province. While most of the region is dry, the Vanderkloof Dam is a major tourism asset. Many of the region’s small towns are geared to cater to tourists drawn to the magic of the Karoo’s open spaces. Rock art is found in several locations.

The Namakwa region is famous for its flowers, but it also hosts the South African Astronomical Observatory, several historic mission settlements, the Namaqua National Park (on the West Coast) and the awe-inspiring Richtersveld Transfrontier Park. Springbok and Calvinia are the two major towns in this huge district, which is also the only Northern Cape region with a coastline.