There is more freight rail traffic in Mpumalanga than in any other province. This is principally because of the transport of coal, but there are also large volumes of chrome, ferrochrome, forestry products, chemicals, liquid fuels and general freight.

The Balfour North to Volksrust section of the Gauteng to Durban mainline carries the largest volumes, most of which is long-haul freight passing through the province. The busiest internal provincial Transnet Freight Rail section is the Maputo Corridor which runs west to east from Pretoria to Maputo.

Despite these high rail volumes, a huge amount of mineral product (mainly coal) is transported by truck around and out of the province. This puts immense pressure on Mpumalanga’s roads network, particularly in the Gert Sibande District and the Nkangala District. Road improvement plans aim to simultaneously fix rural roads and make better connections between rural and urban areas.

The statistics relating to coal haulage in Mpumalanga are stupendous. In one 12-hour period, 34 198 tons of general freight were recorded for the section of the N4 highway between Nelspruit and Komatipoort. On the R50, Leandra to Standerton, the volume was 25 615 tons (Mpumalanga Department of Public Works, Roads and Transport).

Mactransco’s website states that its trucks serving Tshikondeni Coal Mine travel 3.7-million kilometres per year, working all day for six days a week.

The fleet of ABF Legend Logistics, a Super Group company, contains more than 200 super-link coal haulage trucks while another company in the group, SG Coal, claims to have one of the biggest fleets of coal haulage trucks in Africa. Coal Tipper Resources operates out of Bethal.

The South African National Roads Agency (Sanral) has presented its long-term vision, Horizon 2030, as part of its contribution to the National Development Plan 2030. Road improvements which have boosted the transport infrastructure of Mpumalanga include the upgrades to the R570 (linking Malelane on the N4 to Swaziland), the N11 (Hendrina-Middelburg) and part of the vital R573 Moloto Road, which carries huge volumes of traffic to Gauteng and Limpopo. Sanral’s three-year plan for the R573 allocates R1-billion to
the project.

The R573 forms part of the Moloto Corridor, which connects the province with Gauteng Province. The long term aim is to create a coordinated road and rail corridor including rapid rail facilities. With about 50 000 motor vehicles using the route every day, it is one of the busiest parts of South Africa’s road network. The plan to upgrade the corridor is one of 18 national Strategic Infrastructure Projects (SIPs).

The first phase of the Moloto Corridor Development Programme, which involves the upgrading of road infrastructure is nearly complete. Accidents have been reduced as a result of the R3.7-billion first phase.

Run by the Maputo Development Corridor Logistics Initiative (MCLI), the corridor runs from just outside Pretoria in Gauteng, through Witbank, Middelburg and Nelspruit in Mpumalanga, and on to Maputo in Mozambique.

An infrastructural development that should boost trade is Transnet’s planned Swaziland Rail Link (SwaziLink) project. A 146 km railway line between Lothair in Mpumalanga and Sidvokodvo in Swaziland will allow for better movement of freight between the countries and provide an alternative route for freight to Richards Bay.

Transnet Freight Rail is the main operator and the chief freight movements are coal, fuel, chemicals, timber, iron and chrome ore, fruit, maize, animal feed, wholesale and retail goods, steel, building supplies, fertiliser and consumer goods. The port of Maputo in Mozambique is an attractive option for freight. The coal terminal at Richards Bay in KwaZulu-Natal receives the majority of the coal that is mined in the province. 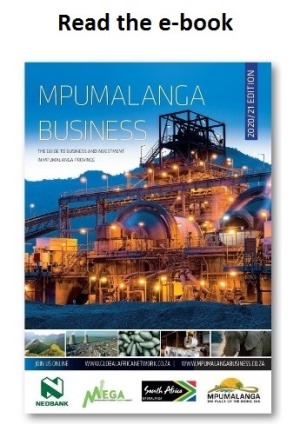 A new flight has been added to SA Airlink’s connections between Limpopo and Cape Town. In addition to the regular early-morning flights out of Nelspruit Kruger Mpumalanga International Airport (KMIA) with a late-afternoon return flight, an early morning Saturday flight has been added. This leaves Nelspruit KMIA at 7h40 and arrives in Cape Town at 10h05 and is targeted at the leisure traveller.

Nelspruit KMIA is the province’s main airport, serving both the capital and being a convenient entry point to the southern part of Kruger National Park. Airlink has direct flights to and from Johannesburg, Cape Town, Durban and Livingstone in Zimbabwe.

Hoedspruit Eastgate Airport is a popular destination for travellers on their way to private game lodges and is also near the Orpen Gate of Kruger Park. Middelburg Airfield is one of the larger alternate airports in the province, boasting a 1.9 km runway that can accommodate a 737. The annual Middelburg Air Show is held in June. Many game lodges have airstrips and helipads. SA Red Cross Air Mercy Service operates out of the old Nelspruit airport just south of the city.