For those who make the trip to the far north-east of the country, a truly wild and magical escape awaits!

Many people do not know the origin of the name ‘iSimangaliso’. It is derived from a Zulu proverb – Ubone isimanga esabonwa uJeqe kwelama Thonga (“If you have seen miracles, you have seen what uJeqe saw in the land of the Thonga”).

uJeqe was the late Zulu King Shaka’s insila – a royal aide who keeps the king’s secrets and is customarily buried with him. When Shaka met his end, uJeqe fled his home to avoid burial. His travels took him into the area that is now known as the iSimangaliso Wetland Park, which was home to the Thonga people. After enough time had passed to ensure his safety from his supposed fate, uJeqe returned to his people and exclaimed: “I saw wonders and miracles in the flat land and lakes of Thonga.” The name iSimangaliso, referring to wonders and miracles, was thus deemed the perfect choice for this truly remarkable part of South Africa during its rebirth as South Africa’s first World Heritage Site.

As for the flat lands of Thonga, these are some of the least known or explored in the Park, but for those who make the trip to the far north-east of the country, a truly wild and magical escape awaits! 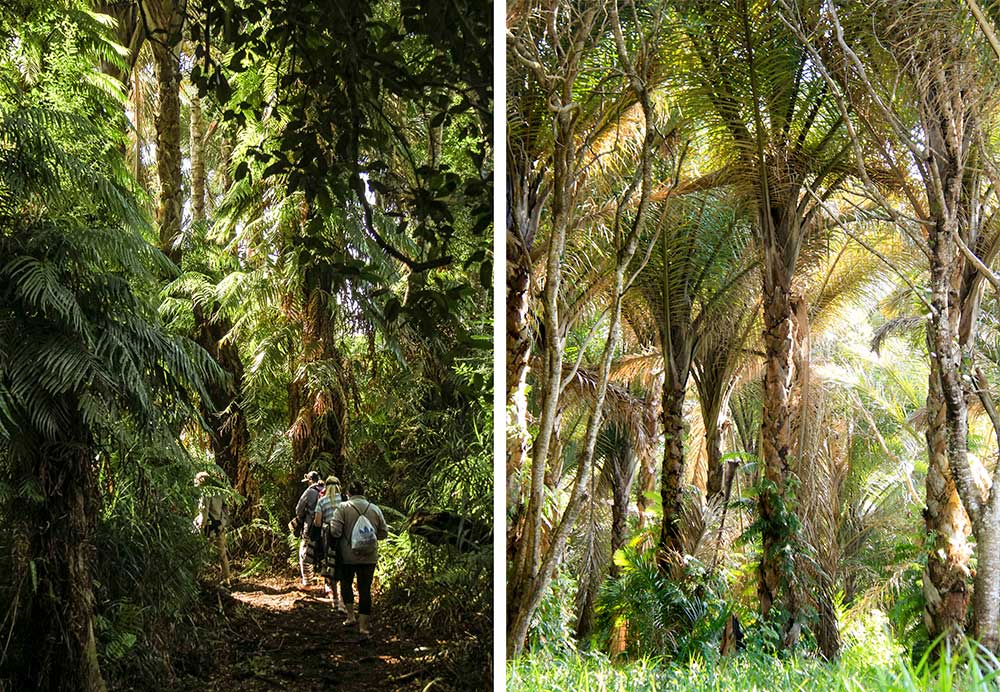 The four interleading lakes of Kosi Bay, fringed by exquisite natural forests including five types of mangroves and the largest natural stands of raphia palms, comprise one of iSimangaliso’s four RAMSAR sites – wetlands of international importance. (The Coastal Forest region is also home to two more, being the turtle beaches and coral reefs of Thongaland, and Lake Sibaya).

There is little to beat a boat trip on the lakes and connecting channels, and an arranged visit to a traditional fish kraal through the owner is an enlightening way to learn about age-old traditions while also ensuring benefits for the local community.

Another highly worthwhile activity is to join a local turtle guide on a beach walking tour between the months of November and March to witness first-hand another miracle – endangered turtles laying eggs or, later in the season, the young ones hatching. Thonga people are warm, friendly and very keen to talk about their traditions which are distinct from other South African tribal customs.

Accommodation ranges from the simplest campsites to catered luxury – a perfect example of the latter being the Kosi Forest Lodge on the edge of the Park, where community beneficiation is an integral aspect of the tourism model. This lodge also has an exclusive concession to offer guided canoe trips on the pristine Siyadla River that enters the southernmost of the four lakes that make up the Kosi Bay system, Amanzimnyama.

Across the lakes and beyond the dunes lies a wonderful swathe of beach, accessed either by boat or by sand road to Bhanga Nek. The Kosi mouth is also accessible and at low tide, is one of the most extraordinarily beautiful places in the country, blessed with a natural aquarium for safe and shallow snorkelling.

Soft sandy roads cutting through sweeping plains of coastal grasslands dotted by umdoni (waterberry) trees and lala palms lead the explorer from Kosi Bay towards Sodwana Bay, passing numerous small bays that beg to be snorkelled. Midway along this stretch lies the village of Mabibi, and the luxury coastal Thonga Beach Lodge with the adjoining Mabibi campsite.

It is here that one can experience one of the most truly wild, barefoot luxury destinations in the Park. The lodge, owned by the Isibindi Africa group, has a proud model of community partnership and is the largest employer in the region, supporting a clinic and school as well as dozens of staff and families.

Visitors may experience a number of the Coastal Forest’s attractions here through forest or beach walks, turtle tours, ocean boat trips or canoeing on Lake Sibaya.

South Africa’s largest fresh water lake, Sibaya is also a RAMSAR wetland. Fed entirely by the runoff of rainwater filtered through the soaring vegetated dunes, the lake is suffering the dual perils of lower annual rainfall and higher extraction by neighbouring alien tree plantations as well as increased human settlement. For the first time in living history, the lake has split into two distinct sections. It is nonetheless a region of wild beauty, home to hippos, crocodiles and water birds, and best experienced at sunset.

For now, most of the Coastal Forest region is accessible only by self-drive in a 4×4 – apart from arranged transfers to, and local tours by the lodges. But this in itself is a large part of its magic. There is so little of South Africa that is still wild and free – this is one such place and it is just begging to be explored by the adventurous traveller.