HomeCompany NewsPorts upgrade and expand to support manufacturing and exports

Ports upgrade and expand to support manufacturing and exports

Manufacturers are investing in KwaZulu-Natal Province and export volumes are on the rise as the province’s two main ports upgrade and expand.

Almost a third of South Africa’s manufactured exports are produced in KwaZulu-Natal. A number of domestic and international manufacturers are either buying into the province or building new facilities in order to export finished goods.

The Mara Group’s R1-billion investment in a smartphone factory at the Dube TradePort is the latest in a string of inward investments that KwaZulu-Natal has received. This includes expenditure of more than R1.2-billion by Arçelik, the Turkish owner of Defy, at the company’s three South African plants (two of which are in the province) and R4.5-billion by Nyanza Light Metal in a titanium dioxide pigment plant at Richards Bay.

The Special Economic Zones (SEZs) at Richards Bay and King Shaka International Airport (the Dube TradePort) are key components of the strategy of attracting investors to the province. Dube TradePort attracted R7-billion between 2012 and 2019 and the same amount is expected to accompany the development of Phase 1A and Phase 1F of the Richards Bay Industrial Development Zone (RBIDZ).

Two investors in 2019 were edible oils manufacturer Wilmar Processing SA, which is investing more than R1-billion in a plant, and Elegant Afro Line, which will spend about R900-million on its chemicals plant.

There are plans to establish a clothing and textiles SEZ in the province to build on the province’s established strength in the sector and an automotive supplier park will be in operation by 2021. Toyota and Bell Equipment play a big role in the automotive sector while the Engen Oil Refinery is a strategic asset.

A solid base for future growth

The province’s existing infrastructure, good soils and fine weather provide a solid base for future growth. KwaZulu-Natal already has significant capacity in heavy and light manufacturing, agri-processing and mineral beneficiation, all of which is supported by South Africa’s two busiest ports (Richards Bay and Durban), the country’s busiest highway (the N3), a modern international airport and pipelines that carry liquids of all types to and from the economic powerhouse of the country around Johannesburg in the interior.

Sappi’s dissolving pulp mill at Umkomaas south of Durban (below) is one of the province’s most significant industrial sites as it produces huge quantities of a material that is used in viscose staple fibre, which in turn is used in clothing and textiles. Together with production volumes from Sappi’s mill in neighbouring Mpumalanga province, the company is the world’s largest manufacturer of dissolving pulp. Sugar, tourism and forestry and paper are other important sectors driving growth and employment in KwaZulu-Natal.

In his 2020 State of the Province address, Premier Sihle Zikalala listed the sectors which are to be targeted for investment in the future. These are:

KwaZulu-Natal has a long coastline that stretches from Port Edward in the south to the iSimangaliso Wetland Park in the north. The province’s contact with the sea has brought obvious benefits: fishing, fine beaches enjoyed by millions of tourists and two great ports.

These ports export vast quantities of minerals (mostly through Richards Bay) and manufactured goods (Durban) and serve as an important conduit for imports of all sorts. The Richards Bay Coal Terminal exports massive quantities of coal while the Port of Durban is the busiest port in Africa.

However, planners want to massively increase the economic benefits that the ocean can bring. An Oceans Economy Review Workshop has come up with a range of sub-sectors that can help grow the provincial economy and invite foreign direct investment:

Strategies to grow the Oceans Economy dovetail with ongoing projects to boost the capacity of the province’s ports and to explore for gas and oil in the Indian Ocean. If oil rigs were to start visiting the KZN coastline on a regular basis, the ship-repair industry would grow exponentially.

The Oceans Economy is one of the focus areas that has been chosen by national government to be part of Operation Phakisa, a focused, goal-driven attempt to jump-start a specific economic sector. Overall, Phakisa intends creating a million jobs by 2033 and injecting R177-billion into national GDP.

The decision to build a cruise-ship terminal at the Port of Durban is a good example of the kind of decision that is in line with an “Oceans Economy” approach.

The mixed topography of the province allows for varied agriculture, animal husbandry and horticulture. The lowland area along the Indian Ocean coastline is made up of subtropical thickets and Afromontane forest. High humidity is experienced, especially in the far north, and this is a summer rainfall area. The centrally-located Midlands is on a grassland plateau among rolling hills. Temperatures generally get colder in the far west and northern reaches of the province.

The mountainous area in the west – the Drakensberg – comprises solid walls of basalt and is the source of the region’s many strongly running rivers. Regular and heavy winter snowfalls support tourist enterprises. The Lubombo mountains in the north are granite formations that run in parallel.

KwaZulu-Natal has 10 district municipalities and a metropolitan municipality, the most of any province in South Africa. In economic terms, the province offers diverse opportunities. 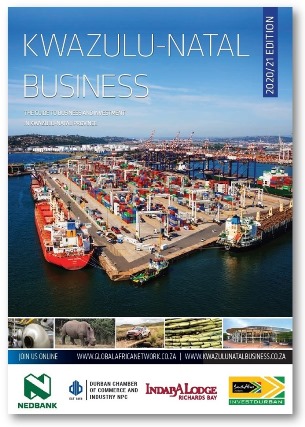 This area is the province’s most populous. The city of Durban has experienced booms in sectors such as automotive, ICT, film and call centres. The promenade now reaches all the way to the harbour and the Point development will benefit. Major investments are taking place at the Port of Durban with the current centrepiece being the Durban Cruise Terminal. The Container Terminal is also undergoing an extensive overhaul.

Also known as the Midlands, this is a fertile agricultural region which hosts the popular annual Royal Show. It produces sugar cane, fruit, animal products, forestry and dairy products. Pietermaritzburg is the provincial capital and home to a major aluminium producer along with several manufacturing concerns, including textiles, furniture, leather goods and food. The city has good transport links along the N3 national highway, excellent schools and a lively arts scene. The Midlands Meander is a popular tourist destination.

Although most of this area is very rural, Richards Bay is one of the country’s industrial hotspots because of its coal terminal, port and aluminium smelters. The Richards Bay Industrial Development Zone (RBIDZ) is a major economic node in itself and with the possibility of a power plant being built, the RBIDZ could become an energy hub. Mining is an important sector in this region.

The other major urban centre is Empangeni which has several educational institutions. The King Shaka International Airport is adjacent to the Dube TradePort, a Special Economic Zone (SEZ) which is attracting investors.

The economic powerhouse is Newcastle in the north-west: coal mining, steel processing and manufacturing are major activities. Some old coal mines are being reopened by new coal companies to cater for the country’s power stations’ demand for the fuel.

Game farms, trout fishing and hiking are part of an attractive package for tourists, and Zululand is a popular destination for cultural experiences. The region is rich in Anglo-Boer War history which includes battle sites such as Islandlwana and Rorke’s Drift.