A regional overview of the Free State Province

As of February 2020, nearly 100 new permanent jobs had been created within the Maluti-a-Phofung Special Economic Zone (MAP SEZ), the strategically located area on the N3 highway designed to attract new investment to the Free State Province.

Other areas that are being upgraded to provide infrastructure to encourage manufacturing are the Phuthaditjhaba Industrial Park and the Botshabelo Industrial Park. The N3 is South Africa’s busiest road and the Highway Junction truckstop at the entrance to Harrismith claims to be Africa’s biggest. More than 1 500 vehicles pass through every day and three forecourts cater to three fuel brands. Refuelling, storage and handling take place here, highlighting the province’s strengths in logistics as the country’s most central province.

The country’s two great highways pass through the province. The N3 links the ports of Richards Bay and Durban with the industrial heartland and the N1 provides north-south connectivity. The provincial capital, Bloemfontein, is another logistics hub. Three other national highways intersect the province which is also well served by rail and air links. The Bram Fischer International Airport serves the provincial capital.

Links to the west (Kimberley and on to Namibia) and east (to Lesotho) underpin the planning behind the N8 Corridor concept which covers Bloemfontein, Botshabelo and Thaba Nchu. A plan for the coordinated development of the N8 Corridor has been approved by a range of bodies and is being funded by the Development Bank of Southern Africa (DBSA) and the Mangaung Metropolitan Municipality.

The Omnia Group is present in 45 countries, has more than 4 400 employees and a net asset value of R9.7-billion (March 2020). The company’s agricultural and chemicals divisions have a large presence in the northern Free State town of Sasolburg and the company has recently acquired a US-based firm that specialises in patented agriculture biological products, further expanding its geographical footprint and product range.

International fuel, gas and chemicals company Sasol regularly invests in new technologies and in expanding production of its many products.

Renergen, the owners of the Virginia Gas Project, announced in March 2020 that their findings had “radically improved” the company’s drilling plan. One of the key facts to emerge is that the gas contains helium of up to 12%, a good percentage. Despite the drawback associated with Covid-19, Renergen also announced that it was going to roll out filling stations across South Africa to cater to companies in the trucking industry converting to gas.

Mining is reduced in importance but remains a significant employer. Harmony Gold has several assets in the province and Sibanye-Stillwater has undertaken a feasibility study on a property adjacent to its existing Beatrix mine.

In agriculture, the Free State is looking forward to the implementation of the African Continental Free Trade Agreement (AfCFTA), the free trade agreement that was stalled by the Covid-19 pandemic. The Free State’s agricultural export basket is well suited to trading with African states and strategies are being considered to promote apples, asparagus, cherries, cut flowers, sorghum, venison and wine.

The Free State produces significant proportions of South Africa’s wheat (30%), sunflowers (45%) and maize (45%) and is ranked third in contribution to national GDP in agriculture.

The Free State shares borders with six other provinces, in addition to the Mountain Kingdom of Lesotho. A summer-rainfall region with a mean annual rainfall of 532 mm, the Free State’s climate, soil types and topography vary greatly within the province, with plains in the west and mountains in the east.

The western and southern areas are semi-desert, with some Karoo vegetation occurring in the south. The southernmost region of the Free State is a largely dry area with open grasslands predominating, although it is also home to the Gariep Dam, South Africa’s largest dam.

Mangaung Metropolitan Municipality is a Category A municipality which governs Bloemfontein, Botshabelo and Thaba Nchu. The sixth-largest city in the country, the Mangaung municipal area covers more than 6 263 km² and has a population of about 850 000 people. Bloemfontein is responsible for about 25% of provincial GDP.

The southernmost region of the Free State is a largely dry area with open grasslands predominating, although it is also home to the Gariep Dam, South Africa’s largest dam. The dam is also the site of small hydro-power and aquaculture projects. The nearby Tussen die Riviere Nature Reserve and the Mynhardt Game Reserve are popular. Crops are produced in the northern parts of the district and sheep farming is the biggest activity in the south. Diamonds, gravel and clay are mined at Koffiefontein. Jagersfontein is one of the first places where diamonds were found.

Mining is the most important economic activity in this area, also known as the Free State
Goldfields, but it is also the most important maize-growing area in South Africa. A large natural gas field has been discovered on what used to be gold turf. Bothaville hosts the annual NAMPO maize festival and the headquarters of Grain SA. Welkom is the major urban centre in the district. The area has tourist assets such as a holiday resort on the Allemanskraal Dam, the Goldfields Wine Cellar in Theunissen and the Willem Pretorius Game Reserve. 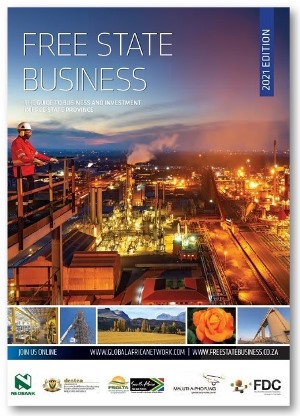 The chemical complex at Sasolburg is the economic driver in the district, which shares a border with Gauteng province along the Vaal River. Kroonstad is the district’s second-largest town and has a number of engineering works and a railway junction.

A good proportion of South Africa’s grain crop is sourced from this district and when the vast fields of sunflowers and cosmos flowers are in bloom, a marvellous vista is created. The Vaal River presents opportunities for yachting, rafting and resort-based enterprises. Parys is a charming town and Vredefort is home to a World Heritage site – the Vredefort Dome where a meteor crashed to earth.

Industrial activity is undertaken at Harrismith and Phuthaditjhaba, where the Free State Development Corporation is promoting investment. The Maluti-a-Phofung Special Economic Zone (SEZ) at Harrismith is a multi-modal transport and logistics hub. The commercial centre of the district is Bethlehem while Clarens and Ficksburg have become famous for their artists and cherries respectively. 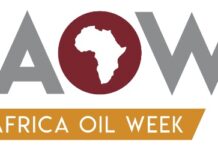 July 22, 2021
The Atlantis Special Economic Zone for Green Technologies is situated on the West Coast of South Africa, 40 km from Cape Town. This epicentre of greentech activities offers opportunities and incentives to investors from around Africa and the world.

July 22, 2021
Through a combination of social media and new technology, investing and trading have become mainstream over the last decade. One area of interest that’s become popular with those wanting to speculate on multiple companies is indices.

May 31, 2021
Biggi Brands was founded in 1991 and is situated in Hopetown, Northern Cape. The company supplies premium quality popcorn to customers all over the world.
- Advertisement -