Themed “Realising Limpopo’s Investment Potential in Mining and other strategic sectors of the economy” the conference is aimed at promoting new growth sectors through beneficiation of the industrial base. 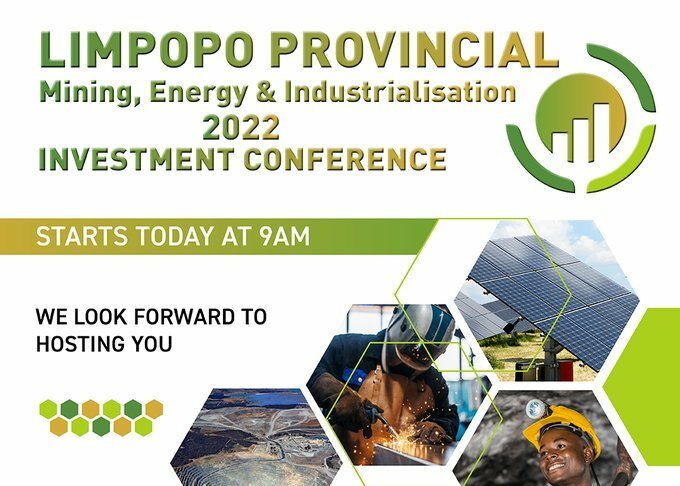 Themed “Realising Limpopo’s Investment Potential in Mining and other strategic sectors of the economy” the conference is premised on increasing promoting new growth sectors through beneficiation of the industrial base.

The objectives of the conference are:

Establishment of new enterprises in Renewable and Alternative Energy

Hydrogen has been identified as a potential source of clean energy to decarbonise various industries and allow for the scaling up of renewable energy. Renewable energy (solar and wind) produce hydrogen through electrochemical and bio-based methods, namely green hydrogen, has been singled out as a viable option to achieve net zero carbon dioxide (CO2) emissions.

Again, Hydrogen fuel cells, a fast-emerging and important application for green hydrogen produce only water as a by-product. This makes green hydrogen very attractive for achieving net zero emissions by 2050, therefore contributing immensely to sustainable development in line with the Paris Agreement on climate change signed in 2015.

Hydrogen has been identified as a potential source of clean energy that will help decarbonise various industries and allow for the scaling-up of Renewable Energy (RE) generation. It is an abundant, has a very high energy density and, when used as a store of energy, not only does it not emit CO2 but also only produces water as a by-product when used as a fuel in fuel cells to produce energy.

The global output of hydrogen

The production of hydrogen globally stands at between 50-70 tones per year, of which 50% of it is used for production of ammonia for the manufacturing of fertilizers. Hydrogen for energy purposes is estimated to be between 1% and 2% of global consumption.

Downstream applications of green hydrogen include energy storage for power generation, mobility (long haul trucks, aviation and shipping, passenger vehicles), decarbonisation of heavy industries (steel industry) and manufacturing of industrial chemicals and feedstocks for use as fuel or inputs to further decarbonise ancillary industries. The Province of Limpopo with abundance of Platinum (PGMs), is well positioned to revolutionize the green hydrogen energy economy by industrial scale beneficiation of these minerals. PGMS are ingredient to producing fuel cells which is sources of green energy.

More uptake for the SEZs and Industrial Park manufacturing infrastructure

Fetakgomo-Tubatse proposed Special Economic Zone envisions to be the global center of excellence for production of green energy technologies. Surrounded by approximately 40 mining companies, of which 22 are PGMs, this proposed special economic zone is well positioned to facilitate a ‘just transition’ for companies that are in the fore front of moving industries into the greener future.

Fetakgomo-Tubatse municipality is home two biggest smelters in the country and from an infrastructure point of view, the Limpopo Provincial government in collaboration with Department of Trade, Industry & Competition, Sekhukhune District and Fetakgomo-Tubatse Local Municipalities are making firm commitments to supporting infrastructure developments in the area to attract private investors.

Musina-Makgado Special Economic Zone completed its Environmental Assessment and is ready to roll infrastructure to stimulated investment inflow into the zone.

Limpopo Provincial Mining, Energy and Industrialization Conference is yet another endeavor by National Department of Minerals & Energy, Provincial Government and its entity LEDA, to promote investments in mining beneficiation for production of green energy.

To build investor confidence in the Limpopo Province economy

The hydrogen economy has the following results for South Africa:

Furthermore, the hydrogen economy is expected to result in substantial job creation, off-setting employment losses potentially associated with the transition to a low carbon economy.

Key drivers for the hydrogen economy include appropriate national polices and strategies; firm commitments by government and private sector to invest in the hydrogen economy; investment stimulation and partnering at a country and industry level; harmonisation of verification for green hydrogen; and declining cost of fuel cells manufacturing, hydrogen production technology and renewable energy generation.

Capital deployment in the hydrogen economy would go a long way towards achieving climate change mitigation objectives, contribute to the transition to a low-carbon economy, and offset job losses from high CO2 emitting industries.

South Africa is well positioned to offer investors untapped market in the green hydrogen value chain as it has high levels of solar radiation and vast stretches of land for green energy production and has access to European and Asian markets for its distribution.

This provincial mining, energy and industrialization investment conference give expression to Limpopo Development Plan, the Economic Recovery Plan, etc, to ensure that local and international investor community are kept abreast with available opportunities and the policy instruments that support these investment promotions.

Global output of Platinum and value proposition for Limpopo

South Africa has over 80% of global Platinum Group Metals (PGM) reserves (value at R50 000 billion), with Zimbabwe holding a further 7% and Russia 8%, with the three countries claiming 95% of global reserves. Limpopo Province, is fast becoming the country’s leading province in the production of PGMS. Sekhukhune district account to 20 mining companies in the PGM production.

Growth and demand of Platinum

Jewellery demand: Approximately 2.4 million ounces of platinum are consumed annually in jewellery manufacturing. However, demand has been relatively flat recently in the key markets of Europe, North America and Japan. China and India provide the best prospects for growth going forward. In China, consumers increasingly prefer gem-set pieces, whilst growth in India comes off a relatively low base, as consumers still prefer gold to platinum jewellery.

Beneficiation opportunities for fuel cells. A fuel cell combines hydrogen and oxygen to generate electricity, whilst discharging only water and heat as a by-product, with relatively high efficiency levels (ca. 50% for electricity as opposed to 25% for the internal combustion engine).

Green Energy Productions: As mentioned earlier, the green hydrogen energy is the future and preferred renewable energy that gives net zero hazardous emissions to the environment and derived from platinum.

The Fetakgomo-Tubatse proposed SEZ is positioned to lead industry into the greener future by promoting itself as the platform for such investments during the Limpopo Mining, Energy and Industrialisation Investment Conference.