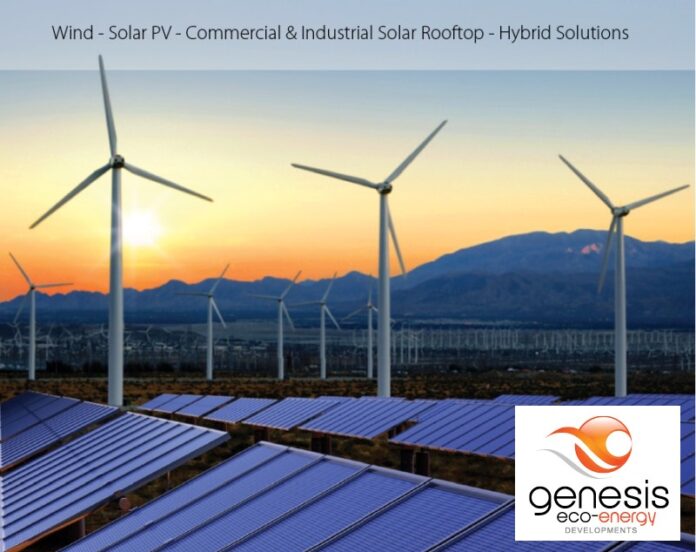 Where did you start?

Jeffreys Bay Wind Farm was one of our first projects back in 2001. That started as a very small project which was a 15 MW wind farm with a 5.5 MW pumped storage component. As the market changed the project changed and it became one of the very first successful large-scale wind farms as part of the Renewable Energy Independent Power Producer Procurement Programme (REIPPPP).

That was a large project for a first project.

When we started with Genesis we were one of the pioneering renewable energy companies in South Africa. Many people used to say renewable energy is only fit to be rural energy. As technologies matured the markets matured and people have come to understand the scope and scale and application of renewable energy as a modern energy source. We had an old saying which we borrowed and adapted: think big, start small and scale fast. It’s very similar to the succesful and rapid evolution of cellphones and personal communications.

Obviously, the market changed once the national government was looking for power?

We started off understanding that given climate change challenges and global market shifts, the whole move to clean, decentralised and distributed power would eventually catch up with South Africa. We spent a lot of time and energy in working with government to get them to understand how renewable energy could play a role in achieving government’s economic and development objectives, ranging from power supply at a much more affordable rate right through to building new skills and catapulting South Africa into a new era. We started with that in 2001, way before the REIPPPP was even dreamt of.

We had the vision, we had the tenacity and the wherewithal to stick it through – and that still holds today. It’s in our pioneering DNA. Together with others, we have been able to convince policy-makers that renewable energy has a fundamental role to play in reshaping the way that we deliver and use energy.

I presume that you are pleased that there is an Integrated Resource Plan (IRP) and that RE is part of it?

Yes, we are pleased. Renewable energy is starting to take its rightful place. The IRP in itself still needs to go a long way to reflect adequately the realities of the 4th Industrial Revolution. We think this will happen as South Africa comes to terms with all the demands for jobs and for economic growth. The economic challenges that we have today need to be reflected in the IRP. Renewables are uniquely positioned to drive economic growth.

Are you interested in technologies besides wind and solar?

We talk about hydro-marine and bio-energy because we also have a very strong interest in the full spectrum of renewables. It is still early days for marine energy though it holds promise.

What underpinned the decision to develop Jeffreys Bay and when did you exit the project?

The team identified an opportunity for wind technology to play a role at local scale and deliver on the needs of a local municipality and industries who were struggling with power quality. The project was born with the objective of strengthening the grid, strengthening power quality and playing a major role in economic development in the Jeffreys Bay area. We exited the project when we sold it on at financial close in Round One of the REIPPPP.

Where else are you active now?

We also secured two 50 MW PV plants in Round One. In Round Three we were successful with three wind farms, all three of which are now operational and in which we still retain a 15% shareholding. The wind farms in the Northern Cape are Khobab, Loeriesfontein and Noupoort. We are actively developing projects in three Southern African countries.

Did retaining your share represent a shift in thinking?

Genesis is a South African born and bred company. We aim to hold on to our projects for the long term if we can. We have a long-term vision of owning and operating a significant portfolio of projects. Genesis is one of the few 100% South African-owned development companies that have been around for some time.

Davin has been active in Genesis since becoming a shareholder in 2002. His experience in the renewable energy sector extends from 1995. He has been part of developing and commercialising the various companies in the Genesis group, which is developing over 2 500 MW of renewable energy projects in South and Southern Africa, 600 MW of which is part of the REIPPPP.

Davin has been the Chairperson for SAPVIA since 2014, served on the board of SAWEA for four years and was a co-founder and Steering Committee member of the SA RE Council. He has also founded a number of sustainability consulting companies.