Transforming the water environment for industrial, commercial and private users 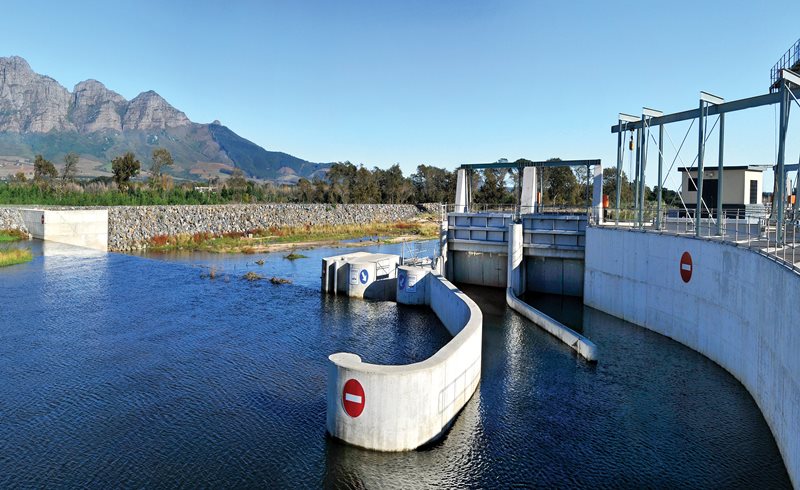 In 2017/18 the National Department of Water and Sanitation will spend R12.5-billion on dams, water transfer schemes and bulk distribution. Improving and expanding water infrastructure are key elements to ensuring water security in a water-scarce country.

The completion of the De Hoop Dam in eastern Limpopo means that people living in small municipalities can now expect bulk water delivery. The Trans Caldeon Tunnel Authority (TCTA) is responsible for seeing that bulk water supplies are laid on, but making the local connections and physically delivering the water is up to municipalities and water boards.

The De Hoop Dam is the centrepiece in the large Olifants River Water Resource Development Project which is transforming the water environment for industrial, commercial and private users. The Olifants River System feeds the region that is South Africa’s greatest producer of citrus and subtropical fruits, and supplies many platinum mines with vital water.

A long drought was finally broken in most of the country in late 2016, but the Western Cape continues to experience severe shortages. Tenders for desalination in various guises (including barges in Cape Town harbour) have been issued.

According to Water Wheel magazine, 37% of water delivered to the nation’s municipalities is lost, at a cost of R7-billion per year. This presents an opportunity for companies to provide better pipes and smart meters. Government plans to arrest this trend include a training programme for plumbers and artisans.

Many small municipalities and water boards have not been able to properly manage their water facilities. In response, a new national strategy gives a bigger role to well-resourced water boards such as Umgeni Water and Sedibeng Water. Rand Water has expanded its original footprint and now serves an area which includes Gauteng, and parts of Limpopo, North West, Mpumalanga and the Free State. The national Minister of Water and Sanitation is the shareholder, representing the government of South Africa.

Among the responsibilities of a CMA are checking that water is being used lawfully, allocating resources to parties along a river (farmers, municipalities or businesses), long-term planning, dam safety and checking on the quality of water.

In the 1950s, the Orange River Project delivered water from the Orange River to citrus farmers in the far-away Eastern Cape. In a mostly dry country such as South Africa, this kind of transfer scheme is the norm.

South Africa’s river systems are mostly not where its people are, so 80% of Gauteng Province’s water is imported, mostly from the Vaal River, which is supplemented by complex transfers from the Thukela River and the Lesotho Highlands Water Project, an ongoing project that is behind schedule. The Vaal basin, which serves the most populated and industrialised part of the country including Johannesburg, receives water from seven inter-basin transfer schemes