The maritime economy is building momentum

Port Elizabeth hosted the “Investing in Blue Economy” conference in 2016.

The Eastern Cape is perfectly positioned to take advantage of the new interest in developing a maritime economy. The province has 800 km of coastline, three ports, two industrial development zones geared to attracting investments in new sectors and an academic community geared to maritime research.

A national plan called the Oceans Economy has recently been launched and the ports of East London, Port Elizabeth and Ngqura naturally feature prominently in these strategies for exploiting the coastline and the opportunities offered by busy shipping lines along the eastern seaboard.

The first manifestation of national commitment to the strategy came late in 2016 with the allocation by the Department of Energy of two Liquefied Natural Gas (LNG) plants. One option for private investors to build and operate such a plant is at the Port of Richards Bay in KwaZulu-Natal. The other option (to which 1 000 MW has been allocated) is the Port of Ngqura, at the Coega Industrial Development Zone (CIDZ). This signifies that port IDZs are a key plank in national energy policy, and that ties in with the Oceans Economy plan.

Both IDZs have aquaculture sections and are keen to attract investors in this sector. The East London IDZ already has investors such as Pure Ocean Aquaculture and Ocean Wise. Zone 10 has been set aside within the Coega IDZ for marine farming. Fish such as Dusky Kob and abalone and seaweed are all attractive options for enterprises.

The Oceans Economy forms part of the broader Operation Phakisa, a plan that targets sectors that can best achieve quick returns in terms of growth and job creation. Phakisa falls under the Department of Planning, Monitoring and Evaluation. The four target areas within the maritime strategy are: aquaculture; offshore oil and gas; marine protection and governance; marine transport and manufacturing.

The untapped potential that passes South Africa’s coast is immense. This includes the fact that South Africa does maintenance on only 5% of the 13 000 vessels that use SA ports and services 4-5% of the approximately 130 rigs that pass along the coast each year.

Oil and gas appear to hold the most potential, and the gas plant plans for Coega and the prospect of a manganese smelting facility being established in the same IDZ suggest that this kind of energy-hungry industrial activity could hold good prospects for the Eastern Cape. Ngqura and East London are well positioned to act as container transit points: ships from the east offloading their containers destined for destinations in the Americas rather than taking them all the way there, for the containers to be picked up by other ships.

The capabilities of the region’s workforce, particularly in the automotive and automotive parts sector, could be attractive to repairers and manufacturers in marine sub-sectors.

The Phakisa strategy envisages that Technical Vocational Education and Training (TVET) colleges will largely be responsible for developing skills in the maritime sector but the Nelson Mandela Metropolitan University (NMMU) in Port Elizabeth is positioning itself to play a critical role.

In June 2016 a seminar was arranged by the Oceans Economy Secretariat, under the Department of Environmental Affairs. With the aim of creating a “national maritime cluster”, the event was co-hosted by NMMU, the South Africa Maritime Safety Authority (SAMSA), the South African International Maritime Institute (SAIMI) and the Norwegian Embassy in Pretoria.

In September 2016 the university hosted the inaugural South African Oceans Economy Symposium. The conference was called “Investing in blue growth and sustainable solutions for Southern Oceans: Lessons from Nordic countries”.

A direct spin-off from this conference was the visit later in the year of a delegation of Finnish and Estonian diplomats and business leaders, eager to find out more about investment opportunities in the Nelson Mandela Bay metro and in the Eastern Cape.

NMMU is creating a campus for Ocean Sciences and already has several institutions and research chairs in place. These include a unit aimed at combating sea fisheries crime (FishFORCE, with support from Norway) and the South African International Maritime Institute. The university has four marine sector chairs funded by the South African Research Chair Initiative (SARChI) and the National Research Foundation (NRF):

Transnet’s Maritime School of Excellence offers specialised training at four campuses across South Africa, one of which is in Port Elizabeth. In 2016, 81 students graduated from the Eastern Cape facility and can now be deployed to Transnet Port Terminals or Transnet National Ports Authority facilities.

Transnet has been intensifying its training programmes in recent years. Training is offered in port engineering, terminal operations, marine operations, port management and other specialised training specific to the marine environment, including: marine pilots, tug masters, engineers and crane and straddle-gantry operators.

Published as a Special Feature in the 2017 edition Eastern Cape Business. 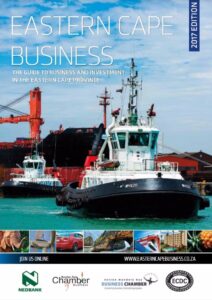