Grain and beef farming is done on a large scale in the North West and various agri-processing plants are under construction.

A concerted effort to establish sustainable agri-processing, to promote food security and to promote local black businesses is being made through the establishment of four district agri-parks across the North West.

Each of the agri-parks will have a specific focus:

Various agri-processing plants are under consideration for the city of Mahikeng: a feedlot and a meat processing plant, including an abattoir and packaging facilities. In Taung the plan is to establish an animal feed manufacturing plant.

North West’s distinct climatic regions are home to three very different types of agriculture. The dry western region is home to large beef-cattle herds, and this is where the growing game-ranching and hunting industry has its base. An Absa Agribusiness study shows that a R5-million investment in cattle over six years makes a 4.8% return, against 27.7% for buffalo and 45.2% for sable.

The eastern and north-eastern parts of the province receive relatively good rainfall and are suitable for the cultivation of crops.

Nearly two million hectares is planted with summer cereals, with about 50 000 hectares given over to winter cereals. The North West produces about 20% of South Africa’s maize and about 15% of its wheat. The central and southern sections of the province are dominated by maize and wheat farming.

North West’s average contribution to the national maize crop over the six years to 2015 was about 20%. The total yield in 2014 was 14.2 million tons, an exceptionally good return, but then the drought brought yields down.

Fully 31% more maize was planted for the 2017 harvest than had been possible in 2016. This amounted to 2.54 million hectares and represents good news for consumers. The very bad national drought had resulted in maize having to be imported which caused food prices to rise; the better planting should improve things. However, at the time of going to print there were concerns about an armyworm which had been detected in several parts of South Africa. Early detection may head off threats to the crop. The South African market consumes about 10.5 million tons of maize.

When it comes to sunflower seed, North West is responsible for 33% of South Africa’s stock, and 23% of the nation’s groundnuts.

The North West supplies 5.4% of South Africa’s potatoes, but parts of the Kalahari are ideally suited to the cultivation of seed potatoes.

The province produces about 11% of South Africa’s cotton harvest, which has been getting smaller for many years. There are plans to grow the sector again, particularly in small-scale farming sector. There are cotton operations near Sun City in the north of the province and in the Taung district in the far south.

The Taung Irrigation Scheme covers about 36 000 hectares, and companies like McCain (potatoes), South African Breweries (barley) and Cotton South Africa (cotton) have standing orders with small-scale farmers. This water supply will also allow for the cultivation of high-yield crops such as pecan nuts, paprika and olives.

The western reaches of the province are sometimes called “South Africa’s Texas” with extensive cattle herds roaming on big farms.

The North West has approximately 1.6 million beef cattle, representing 12% of South Africa’s herd. Major breeds include Simmental, Brahman, Bonsmara and Simbra, a cross between the Brahman and Simmental breeds.

Auctioneers Proveld Bonsmara achieved an average price of R34,000 for bulls at its November 2016 auction. One prize bull was sold for R90,000. A national initiative is promoting Nguni cattle. Vryburg is the centre of the beef-cattle breeding industry.

One of South Africa’s biggest agricultural companies is Senwes. The company specialises in the storage and handling of grains and oilseeds. Its extensive silo infrastructure extends across the interior. Its headquarters are in Klerksdorp. Despite very challenging conditions, the Senwes Group had a turnover for 2015/16 of R9.2-billion.

Suidwes is based south of Klerksdorp in Leeudoringstad. More than 90% of the shares in the company are held by farmers. Grain handling is the main business and there are divisions for retail (17 outlets and one animal-feed depot), mechanisation, finance and research and agricultural economics (Terratek).

Brits is the location of the headquarters of the MGK Group, formerly Magaliesberg Graan Kooperasie. Tau company runs five divisions and a plant that makes fullfat soy, a component in animal feed. 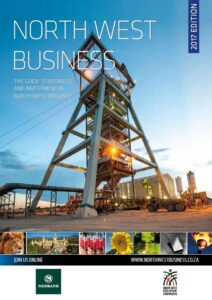