Success comes in many guises

Ethiopia and Mauritius show there is no single formula for putting a country on the road to progress.

Both Ethiopia and Mauritius are members of the African Union (AU) and the Common Market for Eastern and Southern Africa (COMESA). Apart from these links, it’s difficult to see much similarity between the landlocked Ethiopia which stretches over more than a million square kilometres and the small island nation of Mauritius.

What they have in common is that they have found a way to improve their economies. To do that, both nations’ politics needed to be less fractious. Mauritius has achieved that. Ethiopia shows signs that it is on the way to stability.

The other common denominator is textile manufacturing, although the two countries approached the opportunity from opposite ends. Mauritius chose to focus on the high-end market and has developed the skills and quality-control protocols needed to supply that niche. Ethiopia is building a sector which can handle huge volumes. A Bangladeshi garment manufacturer has set up a factory in Ethiopia which supplies H&M and a Sri Lankan company, Hela Clothing, has produced and shipped its one-millionth garment from its factory in Ethiopia. This is part of a drive by Ethiopia to increase its annual export earnings in clothing from $145-million to $30-billion (CNN).

In terms of a financial market index published by Absa in 2019, the two countries are at opposite ends of the scale. The survey concluded that Mauritius ranked second in Africa (behind South Africa) in a set of indicators including market depth, access to foreign exchange and transparency. Ethiopia placed 20th but – crucially and typically in the current environment – Ethiopia was sure to improve its position in 2020 because it is about to establish a stock exchange.

Reforms in Ethiopia are just beginning, Mauritius has been a work in progress for several decades.

The Nobel Peace Prize winner for 2019 was Ethiopian Prime Minister Abiy Ahmed. He won the award primarily for unblocking a post-war stalemate between his country and Eritrea and calming other regional conflicts, but he has also made big changes domestically since taking office in 2018.

In the words of the Director of the Institute for Pan-African Thought and Conversation Adekeye Adebajo, Ahmed has been a “reformist new broom unleashing political freedoms, encouraging foreign investment and promoting reconciliation”.

The peace dividend has allowed the construction of a vital rail link to Djibouti and encouraged a number of new investors to visit Ethiopia, mostly notably from Turkey. Chinese companies have long been present in the country, with the previous rulers of Ethiopia having been close to China.

Ethiopian Airways has used the country’s strategic location between Asia and Europe to build Addis Ababa’s position as a freight and passenger hub. So successful has it been that in 2018 it replaced Dubai as the top transit hub for long-haul passengers to Africa.

The country’s population of about 94-million is young (about 50% are younger than 15 and 70% are younger than 30) and the state is focussed on education. Science and technology are emphasised and the number of Ethiopians in higher education in 2017 was five times what it was in 2005 (World Bank).

Spending on public infrastructure has focussed on transport, energy and industrial parks. The percentage of public spending is due to come down, but it will be replaced by the private sector as a vigorous privatisation process begins. Manufacturing currently accounts for 10% of GDP so there is huge scope for growth. Other state-owned assets which will become available to private investors are in the following sectors: maritime, aviation, electricity, logistics and railways. Exports in renewable energy are expected to generate up to $1-billion annually.

Although Mauritius ranked second to South Africa in the Absa Financial Market Index, in almost every other index the island country is ranked number one in Africa.

For “Doing Business in Africa: Sub Saharan Africa 2018”, the World Bank places Mauritius 25th in the world, and first in Africa. The Heritage Foundation’s 2019 “Index of Economic Freedom” has exactly the same result. This trend is repeated across a range of measures; a global competitive index rates the country 45th and 1st, the WEF’s enabling trade report gives scores of 39th and 1st.

As a colony Mauritius was a sugar-based monoculture. Sugar accounted for 20% of GDP and 60% of exports. Today sugar cane is still in the export basket but there are also textiles, clothing, processed fish and cut flowers. Services exports such as financial services and tourism are rising, and medical tourism and higher education are seen as a high-value sectors worth investing in.

The African Development Bank (AfDB) expects growth of more than 5% in several sectors including information and communications technology, retail and wholesale, food processing and financial services. In 2016 the Kenyan economy received $50-million of investment from Mauritius-based banks and financial institutions (AfDB).

Mauritian post-independence politics was not always stable, but a parliamentary system and strong institutions have helped the country move forward. Property rights and an independent judiciary are factors that promote foreign investment. Shrewd investment in an Export Processing Zone helped to turn the economy away from a single commodity. Personal and corporate tax rates are a flat 15% and in 2018 property transfers were simplified and other reforms were introduced to encourage entrepreneurs.

Article first published as a Special Feature by John Young in the African Business 2020 edition – the guide to business and investment in Africa. 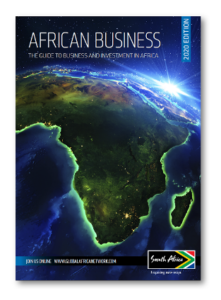