President Ramaphosa will be joined by the President of Ghana Nana Akufo-Addo and is set to bring his investment and reform agenda to the largest mining investment gathering occurring next week. 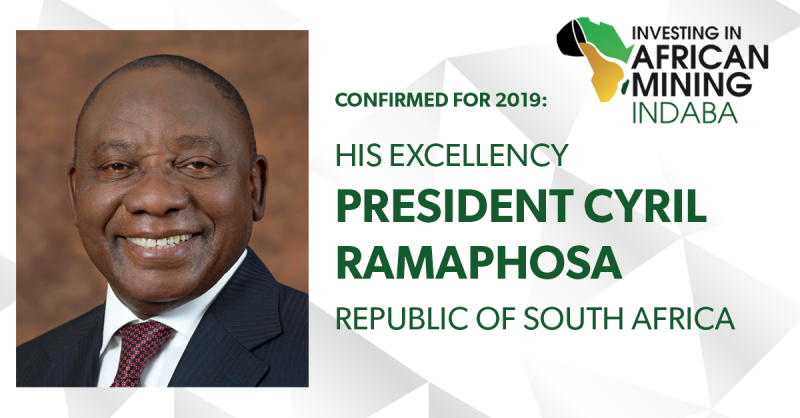 South Africa’s President Cyril Ramaphosa is confirmed to attend Investing in African Mining Indaba, the landmark event for the mining industry taking place every year in Cape Town. President Ramaphosa will be joined by the President of Ghana Nana Akufo-Addo and is set to bring his investment and reform agenda to the largest mining investment gathering occurring next week.

President Ramaphosa, who became the leader of South Africa in February last year, is famous for being an anti-apartheid activist, trade union leader and successful businessman. Since coming to power, he has made a radical overhaul of South Africa’s economy a priority for his leadership, with a focus on growth, youth employment, land reform and tackling social inequality. To achieve this, he announced last year a drive to secure $100-billion of foreign investment for South Africa and has conducted several successful trade missions.

As one of the driving forces behind South Africa’s historic economic development, the mining sector will inevitably play a large part in President Ramaphosa’s future plans. He is expected to address mining industry stakeholders from across the world at the Cape Town International Convention Centre and take part in Mining Indaba’s 25th anniversary, a special event which will celebrate twenty-five years of progress in African mining.

Following a dynamic rebrand in 2018 that took Mining Indaba back to its roots of being a deal-focused investment conference, the 2019 event is set to make an even bigger splash with two heads of state and thirty-five ministers confirmed to speak already, with more expected. Themes include resource nationalism, innovations in technology, battery metals, diversity in mining and sustainable development.

“As we celebrate the 25th anniversary of Mining Indaba, we are very honoured to be joined by President Cyril Ramaphosa. We see ourselves as having an important role to play in the market and in helping drive investment into African mining, but also to champion sustainability and economic development.

This ties into continental wide themes, particularly in South Africa with President Ramaphosa’s investment drive so we couldn’t be more excited to be welcoming him to Mining Indaba next month. This will be a fantastic opportunity for delegates to hear about the President’s plans for driving growth and investment in the mining sector in South Africa.”

Register now and save 10% with our partner discount code: GAN10