Several locations within the Northern Cape are being developed to be catalysts for investment into the province.

Between January 2011 and March 2016, a total of 486 FDI projects were recorded in the Northern Cape. These projects represent a total capital investment of R365.63-billion which is an average investment of R752.23m per project. During the period, a total of 68 533 jobs were created.

Several locations within the Northern Cape are being developed to be catalysts for investment into the province. These include the Upington Special Economic Zone, the Kathu Industrial Park, the De Aar Logistics Hub and the Boegoebaai Port and Rail Project.

Other sites attracting different kinds of investment include the Square Kilometre Array radio telescope project near Carnarvon and the Sol Plaatje University in Kimberley.

The competitive and comparative advantages of the Northern Cape can be summarised as follows:

To realise the socio-economic priorities of the Northern Cape Province, there is a focus on the following key economic sectors:

The following investment opportunities are described in more detail in the 2019 edition of Northern Cape Business. Learn more here 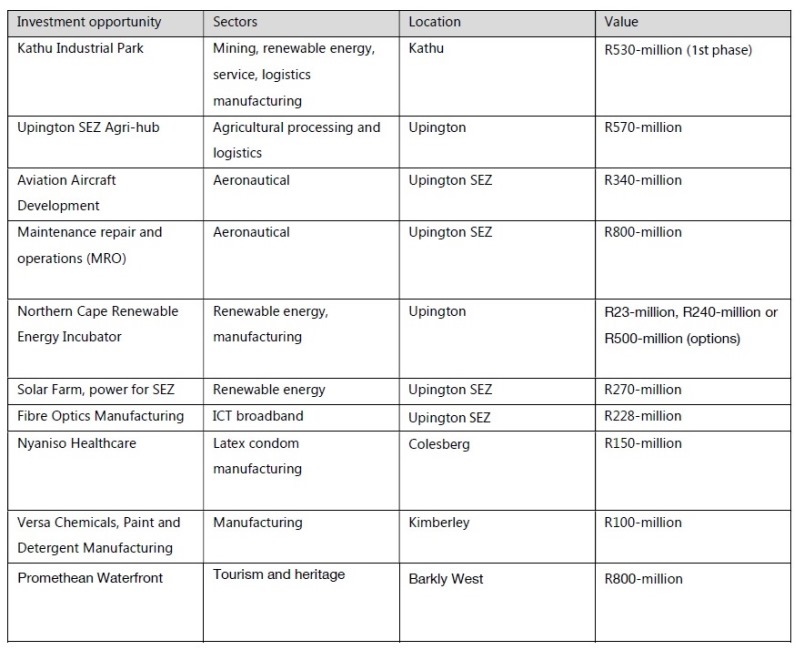 To discuss any of these opportunities, please fill in the contact form and send your details to the Northern Cape Department of Economic Development and Tourism.