Coal has been the engine of the Mpumalanga economy for many years. Most of South Africa’s power comes from coal, and most of those power stations are in Mpumalanga.

More than 80% of South Africa’s coal is currently sourced in Mpumalanga, with the town of eMalahleni (Witbank) being the centre of the industry. Other minerals found in the province include gold, platinum-group minerals, chromite, zinc, cobalt, copper, iron and manganese.

Confronting South Africa’s reliance on coal is not something that seems to be on the agenda at the moment, with a good deal of thought and effort going into finding ways to get coal to Mpumalanga’s power stations from the next big coal region, the Waterberg. A new railway line is mooted. The lives of a number of Mpumalanga coal mines are being extended and Sasol launched the third of its replacement mines in 2019.

The most popular renewable energy technologies, wind and solar, have little purchase in Mpumalanga, but a game-changer could come to the provincial economy in the form of gas. This would allow the province to retain its position as an energy provider and to start moving away from coal.

Vast new fields of natural gas have been found off the coast of Mozambique and the large and sophisticated infrastructure that Sasol has built up over the years make it well-placed to fire up a gas-based economy.

Sasol (pictured above), an integrated oil, gas and chemicals company with more than 30 000 employees and operations in 31 countries, runs several plants at Secunda. Products manufactured at the complex include synthetic fuel, petroleum, paraffin, jet fuel, creosote, bitumen, diesel and lubricants. The primary feedstock for synthetic-fuel production is coal, and the plant is in the heart of Mpumalanga’s coalfields.

Sasol regularly spends tens of millions on upgrades and improvements at the Secunda complex. The Sasol Synfuels refinery is the only commercial coal-to-liquid fuel plant in the world and constitutes a key component in South Africa’s oil and gas sector.

On a smaller scale, the provincial government is looking beyond coal towards a renewable energy future, especially where projects can be tackled by small businesses. There might be opportunities in micro-hydro or rooftop solar projects that will help to reduce dependence on the national grid while simultaneously promoting SMMEs.

The other big new reality that Mpumalanga has to face is the fact that travel and tourism will not be a priority for people around the world any time soon. The effect of the economic lockdown as a response to Covid-19 is likely to be keenly felt by the hotels, lodges and game reserves of Mpumalanga. It is possible that visits to game reserves and nature reserves will be allowed (even encouraged perhaps) sooner than other sectors of the tourism sector because of the big distances between cars and people that can be achieved. But the turnover from restaurants will be absent for some considerable time and in a province where 7% of GDP is derived from tourism, this is bad news.

In 2018, tourists spent R13.1-billion in the province. Numbers were rising for both inter-national tourist arrivals and domestic tourists as a result of a strong marketing campaign by the Mpumalanga Tourism and Parks Agency (MTPA).

The Kruger National Park remains the province’s most visited asset but the decision by UNESCO to afford World Heritage Site status to the Makhonjwa Mountains near Barberton will boost geological tourism to the province and supports the efforts of the province to diversify its offering.

Major projects to improve tourist experiences are underway at the Graskop Gorge (where a transparent lift takes tourists into the depths of the gorge), a skywalk is to be built at God’s Window and a cable car is planned for Three Rondavels.

The UNESCO decision has also had the effect of expanding the curriculum at the relatively new University of Mpumalanga. On the basis of the international body’s ruling, UMP is offering geology as part of a BSc degree, to supplement existing courses in education, agriculture and hospitality.

Several infrastructure investment projects in the tourism sector have been put forward by the Mpumalanga Economic Growth Agency (MEGA). There is a special focus on BRICS countries and provincial authorities are investigating a tourism airlift route between Moscow and Mpumalanga.

The TRILAND partnership with Eswatini and Mozambique is another avenue, as is the collaboration with KwaZulu-Natal, Eswatini, Mozambique and the Seychelles. The latter project is called east3ROUTE Tourism Initiative and proclaims “Experience, Adventure, Scenery and Trade” between the participating provinces and countries.

Various industrial parks are planned which will focus on agriculture and forestry, mining and metals and petrochemicals. An International Fresh Produce Market in Nelspruit and the planned Nkomazi Special Economic Zone (SEZ) are other priorities.

Steel and associated manufacturing remains one of the province’s strong suits and Mpumalanga has rich and varied mineral resources and fertile soil that support diverse farming operations, agri-processing and forestry.

The province also hosts large companies in the manufacturing sector. Columbus Stainless in Middelburg is a major producer of stainless steel, while Middelburg Ferrochrome, Thos Begbie and the Nelspruit-based Manganese Metal Company are among other important heavy industrial companies.

The southern half of the eastern limb of the platinum-rich Bushveld Igneous Complex runs south towards the towns of Lydenburg and Machadodorp. Deposits of chromite, magnetite and vanadium in this area are the basis of the ferro-alloy complex in Witbank-Middelburg and Lydenburg.

Most of the province receives summer rainfall, often via thunderstorms. Frost is common on the Highveld but is almost absent in the subtropical regions where fruit, nuts and citrus thrive. Differences in temperature and rainfall between the Highveld and Lowveld can be considerable. One of the fastest-growing agricultural sectors is macadamia nuts. These are cultivated in the Lowveld and are exported in ever-growing volumes. The Nelspruit district in the Lowveld is South Africa’s second-biggest producer of citrus fruit, while vegetables of all sorts do well in this area too. 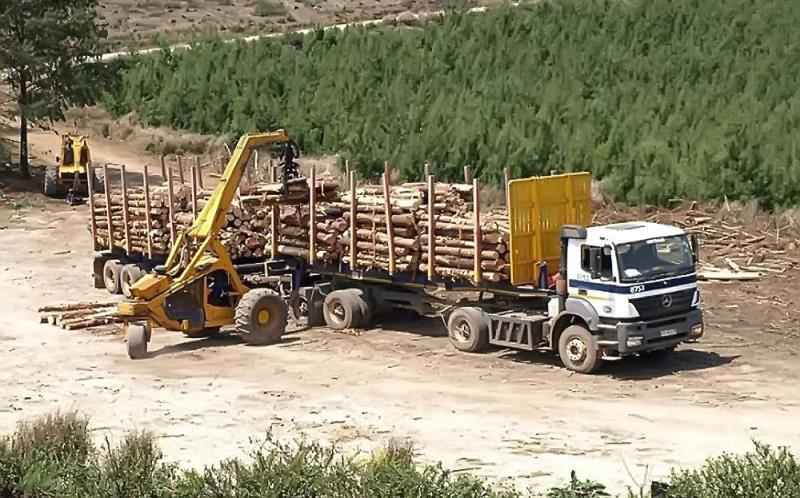 The Maputo Development Corridor is a transportation corridor comprising road, rail, border posts, port and terminal facilities, running from Pretoria in Gauteng through Mpumalanga to the Port of Maputo in Mozambique. This international initiative emphasises Mpumalanga’s excellent location as a logistics and transport hub. 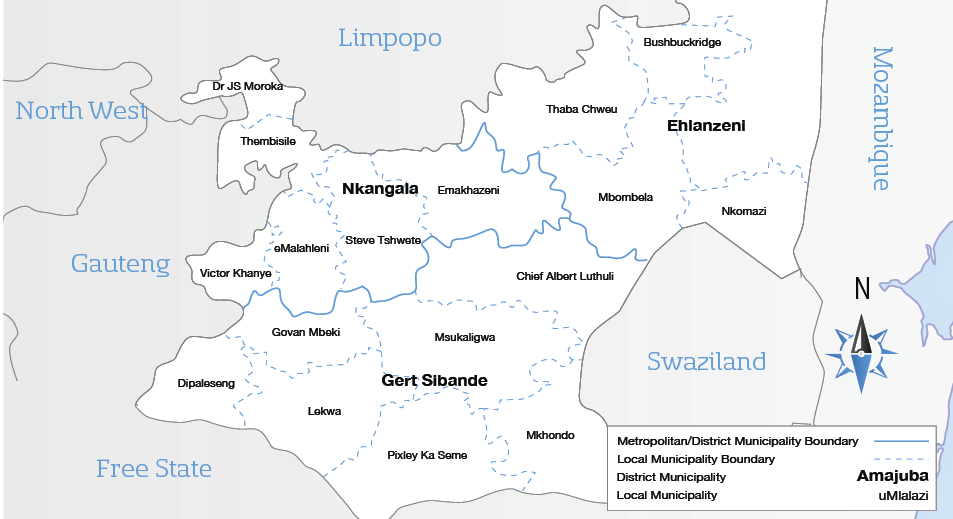 Mbombela (formerly Nelspruit) is the capital city of Mpumalanga province and the main town of the Mbombela Local Municipality within the Ehlanzeni District Municipality.The new University of Mpumalanga has its headquarters in Mbombela. The Lowveld Show and the InniBos Arts Festival are major events that showcase Mbombela’s diversity and importance as a regional hub.

The fertile Crocodile River Valley ensures good fruit crops in a typically subtropical climate. Mangoes, litchis and avocados are among the crops grown most profitably and the town is at the centre of the regional citrus sector. The Lowveld Botanical Gardens contain many rare species.The urban centres are nodes of manufacturing in this region, which is also at the heart of Mpuma-langa’s tourism offering. The Kruger National Park, the Blyde River Canyon, Bourke’s Luck Potholes, God’s Window and other attractions make this a highly desirable place to visit. Citrus, sugar and forestry are the major agricultural products, all
being major contributors to export earnings. The Sappi paper mill at Ngodwana is one of the biggest
of its kind while RCL Foods operates two large mills in the east. The population is about 1.7-million.

Power stations abound in this region which stretches across the southern half of the province and it is the home of the giant Sasol facilities at Secunda. The area makes up the northern tip of South Africa’s maize triangle. Agriculture and food processing are well-developed sectors. Sheep, chicken, sunflower and sorghum are among the area’s many agricultural products. Nestlé has a processing plant at Standerton, as does Astral Foods. Mondi runs a pulp and paper facility in the south-east. Major highways connecting Gauteng with the coastal regions pass through the municipality. About one-million people live in the Gert Sibande District and the municipal headquarters are in Ermelo.

This area straddles the north-west. Rural and traditional in the north-west where the King of the Ndebele is still revered, there is a concentration of coal mining and steel production in the industrial centre. Proximity to Gauteng brings economic opportunity and the area is rich in minerals. The District Municipality’s headquarters are in Middelburg. The north-east hosts a lively trout-fishing sector that includes hatcheries and accommodation for tourists. Approximately 1.4-million people live in the district.

Continue exploring the economy of Mpumalanga Province in the 2020/21 edition of Mpumalanga Business – the guide to business and investment in Mpumalanga: 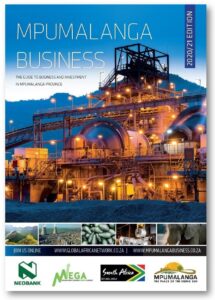