The platinum province is also rich in many other minerals. 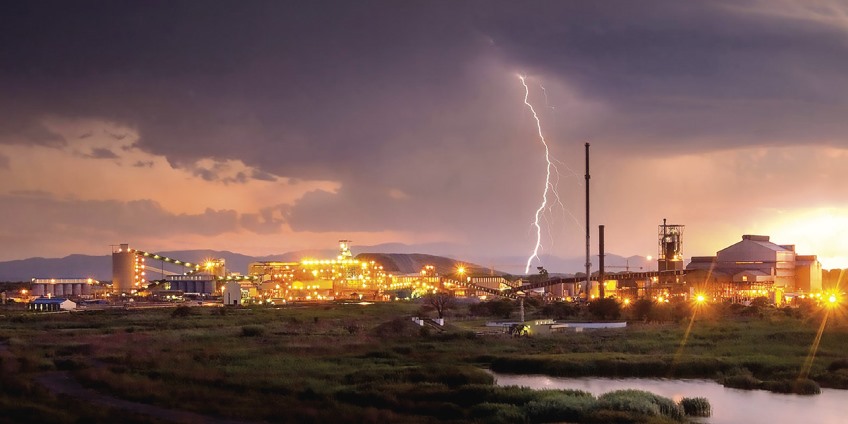 There are nearly 300 active mines in the North West and the sector contributes 31.3% of regional gross domestic product. A large number of families rely on the income earned on mines, with about 18% of total employment in the province coming from mining.

The North West Province is aligned with the Western Limb of the Bushveld Igneous Complex, a remarkably rich mineral formation. Mines in the province produce 50% of the platinum produced in the world, and 65% of South Africa’s platinum group metals.

Gold and uranium are found along the border of the province with Gauteng and the Free State (in Klerksdorp and Orkney). Diamonds are mined at Christiana, Bloemhof and Lichtenburg. Lichtenburg is also the centre of the cement industry.

Volatility in global markets has led to the price of platinum dropping very steeply, leading to large-scale lay-offs at some mines, but analysts believe that the price will recover in 2017. AngloGold Ashanti, which has five gold mines on the border of North West and the Free State province, and employs nearly 25 000 across all its operations in South Africa, is considering reducing its workforce.

All companies operating in South Africa are expected to register with the Unemployment Insurance Fund (UIF) so that workers who suffer retrenchment will receive a pay-out to support them while they look for new employment.

The overall picture for platinum group metals (PGM) looks rather better, with chrome in particular rallying in the second half of 2016. Palladium and rhodium have also increased
in price.

The results produced by Royal Bafokeng Platinum (RBPlat) in 2016 reflected how things have changed since the platinum boom of a just a few years ago. RBPlat (originally a joint venture between Anglo American Platinum and Royal Bafokeng Holdings) turned a profit of nearly R600-million in 2014 but the lower prices have pushed back the construction of the company’s Styldrift I Project and led to reduced production at the Bafokeng Rasimone mine, resulting in a loss in 2015.

Royal Bafokeng Holdings is the investment vehicle of the 100 000 members of the Setswana-speaking Royal Bafokeng Nation who live in the Rustenburg valley.

Another partnership with a community is the Sedibelo Platinum mine, where the local Bakgatla traditional authority has a 26% stake on behalf of the community (in the Moses Kotane Municipality of the Bojanala district). Main community projects concentrate on water supply, roads and bursaries for local students. A hydroponic farm and a brickworks have been initiated.

Sedibelo (formerly Platmin), which received investments from the Industrial Development Corporation (2012) and Pallinghurst (2014), has a 100-Moz PGM resource base.

Impala Platinum is selling its 65% share in Impala Chrome, an extraction business which is located in Rustenburg. The Evraz Group has sold its 78.8% in Brits-based Vametco, a mine and plant that produces vanadium. Bushveld Minerals, which is listed on the Alternative Investment Market in London, is the buyer.

Rustenburg Platinum Mines Limited (including three mine shafts, two concentrating plants and on-site chrome recovery plant) has been sold by Anglo American to Sibanye Gold. This is part of the broader Anglo American strategy to divest itself of a number of its assets, and also points to a strong acquisitions strategy that Sibanye Gold has embarked on since it was established in 2012. With some other acquisitions, Sibanye now controls about 800 000 ounces of platinum and uranium as a by-product of its gold production. With the possibility that it will also buy coal mines, Sibanye Gold will likely change its name in the near future as it looks more like a resources company.

The Platinum Valley Special Economic Zone (SEZ) is to be established at Mogwase in the Bojanala District, north of Rustenburg and east of Sun City. When fully developed, 200ha of land will be given over to three infrastructure facilities comprising Logistics, Light Manufacturing and Heavy Manufacturing. Areas of investment that are expected to grow fastest include fuel cell technology (in which platinum is a vital component), machinery for mining, energy generation and renewable energy component manufacturing.

A range of incentives will be available to potential investors via the national Department of Trade and Industry (dti). By way of example, the 121 Tax Allowance Incentive offers capital investment allowances and training support up to R900-million for new or existing industrial projects. There are a number of other incentives specific to investors in an SEZ.

Located in Rustenburg, the SPI trains people through the making of jewellery, chiefly the design and manufacture of platinum group metal (PGM) jewellery. Small PGM jewellery-manufacturing enterprises and individuals are located at the centre or supported by email correspondence. A three-year period of incubation is offered to small businesses.

Most chromite is processed into ferrochrome, a vital component in the making of steel. South Africa produces 40% of the world’s ferrochrome.

Diamonds are found in several parts of the North West: Lichtenburg, Koster and Ventersdorp near the centre, and Christiana and Bloemhof further south. Rockwell Diamonds sold its Tirisano mine near Ventersdorp in 2015, to a group of royalty miners who had been working on the site.

Several major companies are active in the area where the provinces of Gauteng, Free State and Gauteng meet: Anglogold Ashanti, Harmony and DRD. AngloGold Ashanti’s Tau Tona operation is located in North West.

In 2015, Chinese company Heaven-Sent acquired the gold mine of Village Main Reef, Tau Lekoa near Klerksdorp. (Buffelsfontein gold mine closed in 2013.)

Harmony Gold has two mines in the province: Kal Gold and Kusasalethu (formerly Elandsrand). The company has announced an employee share-option plan (ESOP) where about 33 000 employees across Harmony operations will take up ownership of just less than 3% of the company. South Africa’s third-biggest gold miner calculates that a qualifying employee might be paid out R10 000 for 100 ordinary shares after five years.

Limestone quarries run by G&W Base and Industrial Minerals in the Marico District are located next to a PPC cement factory.

One of the last economically viable limestone deposits in South Africa is mined and processed by Sephaku Cement. Sephaku runs a 6 000-ton per day clinker facility located near Lichtenburg.

AfriSam, PPC and Lafarge already have a significant presence in the Mahikeng/Lichtenburg area, but Sephaku is confident that its clinker and cement-production facilities will be supported by raw materials for at least 30 years.