KwaZulu-Natal’s ports are shaping up to receive more ships

Construction of the Durban Cruise Terminal got underway in 2019.

The KwaZulu Cruise Terminal (KCT) consortium has won the contract from Transnet National Ports Authority (TNPA) to finance, build and run the new Durban Cruise Terminal. The terminal is expected to start functioning for the 2020/21 cruise season.

Within the Port of Durban there are a number of specialised facilities. One of the busiest is the Container Terminal and that is the subject of a large upgrading project. The Port of Richards Bay, the link to the world for South Africa’s coal exporters, is constantly adding to its facilities, the latest being a floating dock, for which approval has been given to be constructed within the port.

The cruise terminal is an important step forward for Durban and fits in well with the larger project that links the port to the upgraded southern end of the promenade, the Durban Point Waterfront. A joint venture between MSC Cruises SA and Africa Armada Consortium, KCT will spend about R220-million on the financing‚ construction‚ maintenance and operation of the cruise terminal for a 25-year concession period. Construction began in 2019.

The cruise terminal will cover a 32 000 m² area that will cater for two ships and at least 5 000 passengers. A ship with 2 000 passengers is worth in the region of R2-million per day for the host city. The number of annual passengers is expected to grow from the current 200 000 to more than 700 000 by 2040. Durban’s hosting of 60 ships per annum is expected to rise to 150 or more. South Africa attracts 0.5% of the world’s cruise-ship market which comprises about 15.4-million passengers annually.

MSC Musica uses Durban as her base port and is joined by MSC Opera during the summer months, sailing from Durban to Mozambique and other destinations in the Indian Ocean. A popular offering is the “Tour to Nowhere” cruise. In 2019 MSC Orchestra made its first visit to Durban.

Several projects are underway within the Port of Durban to increase capacity. Transnet National Ports Authority (TNPA) and Transnet Port Terminals (TPT) are combining to upgrade infrastructure and buy new equipment to improve efficiencies at the Ro-Ro terminal (vehicles and break bulk) and Maydon Wharf (mixed cargo and agriculture) but the biggest project is at the Durban Container Terminal (DCT).

DCT has a capacity of 3.6-million TEUs (twenty-foot equivalent units) and the current project aims to extend that beyond five-million TEUs. The Brics New Development Bank has approved a loan of $200-million for the DCT expansion project.

Durban’s drydock complex is undergoing a series of refurbishments and upgrades. The R48-million 35 m outer caisson was the first project to be completed and now it’s the turn for the inner caisson and drive system to be fixed, at a cost of R61.5-million. Two Durban companies, Lodemann (Managing Contractor) and Channel Construction (Design and Build), are responsible for the project, which will ensure the sustainability of the ship-repair sector within the port.

TNPA states that the multiplier effect in the marine sector creates five jobs for every direct job. The drydock project created direct jobs for 29 skilled employees.

The Richards Bay Coal Terminal (RBCT) is the key component of the port on the northern coast of KwaZulu-Natal but the port’s managers and associated Special Economic Zone (SEZ) are looking to diversify beyond the other types of freight which also form part of the port’s key mandate.

Chief among the diverse offerings being looked at are alternative energy generation and opportunities in the gas sector. A feasibility study is being done on a gas-to-power plant and a large new liquid petroleum gas import and storage terminal was recently built for Petredec by Bidvest Tank Terminals.

Ship repair is another option which will open up other opportunities in marine manufacturing.

TNPA has approved in principle the construction of a floating dock near the existing Small Craft quay. TNPA will have to create new onshore infrastructure and do some dredging before it can call for tenders from the private sector to build the dock, which would be able to handle large and ultra-large cargo vessels (Capesize).

Richards Bay is a deepwater port. Among its 13 berths are terminals that handle dry-bulk ores, minerals and break-bulk cargo.

The quay of the Richards Bay Coal Terminal (RBCT) is 2.2 km long with six berths and four ship-loaders. The 276 ha site contains a stockyard that can store 8.2-million tons while the terminal itself has a design capacity of 91-million tons per year. More than 900 ships visit RBCT every year. 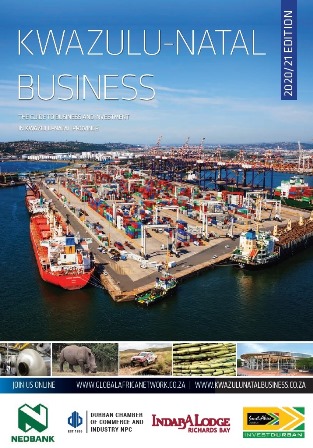