The CEO of the KwaZulu-Natal Sharks Board Maritime Centre of Excellence, Mr Mthokozisi Radebe, shares insights into how the role of his organisation is expanding to meet new demands.

A global leader in bather protection

The KZNSB with over 50 years of experience, is the oldest and only organisation in South Africa dedicated to providing bather protection against sharks. Key supporting activities include educational outreach and marine tourism programmes to create awareness about safe bathing and the marine environment.

The KZN Sharks Board Maritime Centre of Excellence:

The KZNSB has achieved multiple accreditations. Accreditation is an affirmation of KZNSB’s highest standards of teaching and learning and bestows our graduates with internationally recognised certificates.

The student and graduate placement remains a key differentiator between KZNSB and other institutions. The Co-operative Education Unit has successfully gained industry recognition resulting in a high percentage of students and graduates attaining work placements.

Community Engagement remains central to the “Triple Helix” model and several key projects have been delivered including boatbuilding projects at Enkovukeni and EMdlebeni. Careers expos have been held in almost every district in the province. The Umfolozi River project funded to the tune of R6.1-million demonstrates our leading position of being a community-oriented organisation.

The KwaZulu-Natal Skarks Board Maritime Centre of Excellence

Mthoko earned an LLB degree from the University of KwaZulu-Natal and is currently studying towards a Master’s in Maritime Law. He has served as Director and Partner at Norton Rose Fulbright and been a director, CEO or chairman of several regulatory and business bodies.

Please tell us about the training function of the KZNSB.

The initial focus of Maritime Centre of Excellence was on maritime skills development. The evolution of national priorities such as Operation Phakisa – Oceans Economy has seen its operating model reshaped into the “Triple Helix” of Skills Development, Enterprise Development and Community Engagement.

Skills Development centres on the enrolment into maritime occupations, graduate placements and the development of maritime teaching practitioners. The enrolments into maritime have topped 1 500 since 2012. KZNSB has achieved multiple accreditations from the Transport Education Training Authority (TETA), ICDL Foundation, ETDP SETA, and (merSETA) among other training quality assurance bodies. 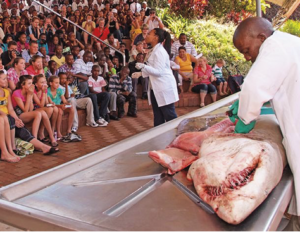 Student and graduate placement remains a key differentiator between MCoE and other institutions. The Co-operative Education Unit within MCoE has achieved successes in gaining industry recognition. The ongoing National Skills Fund (NSF) Graduate and Student Placement Project is one of many placement projects underway. Graduate and Learner placements for students with commercial diving and boatbuilding (both hearing and deaf) stands at an unprecedented 100%.

Community Engagement remains central to the “Triple Helix” model and several key projects have been delivered including boatbuilding projects at Enkovukeni and Emdlebeni. Career expos have been held in almost every district in the province.

In terms of Enterprise Development, a funded project to build 21 boats for use for business purposes has been approved. Furthermore, KZNSB will be staging an Ocean Festival in September 2017. An incubation programme especially for women- and youth-owned businesses is being designed.

How do you maintain safe swimming while at the same time reducing fatality rates of fish and dolphins?

In October 2015 the KZNSB Operations Division rolled out the mixed gear concept of reducing the number of nets at a protected beach and replacing them with drumlines.

This has reduced the capture of non-target species by up to 50% during the nine years that it has been in place at 20 beaches. The latest change resulted in the total length of netting along the KZN coast being reduced from 23.27km to 22.12km. The number of drumlines deployed increased from 79 to 107. The division is currently in discussions in an effort to reduce the capture of humpback dolphins. 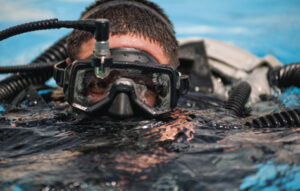 What are some of the achievements of the KZNSB?

The last shark attack/incident to take place off a protected beach in KZN occurred in 1999. This incident was not fatal. There have not been any fatal shark attacks off KZN’s protected beaches since shark safety gear was first introduced in the late 1950s. We reached a significant milestone in August 2014 when we celebrated 50 years of bather protection in KwaZulu-Natal.

How important is research in the business of the KZNSB?

The Research Division is one of the most important divisions as it conducts and facilitates various scientific activities, which include monitoring, documenting and dissecting all catches, collecting biological samples, investigating shark attacks and investigating new non-lethal alternatives to the current shark safety gear. The research results address bather protection, recording of catches, reduction in environmental impact and biological research.

Please expand on the value of partnerships to the KZNSB.

The Transport Education Training Authority (TETA) funded Freight and Customs Compliance learnerships and the training of 30 deaf students that KZNSB is undertaking in collaboration with Whisper Boatbuilding Academy for the Deaf. A community development programme is underway at Enkovukeni in partnership with SA Maritime Safety Authority (SAMSA). There are many other strategic partnerships including the Commercial Diver Programme in partnership with the Sub-tech Group and KwaDukuza Municipality, Maritime Programme with EThekwini TVET College.