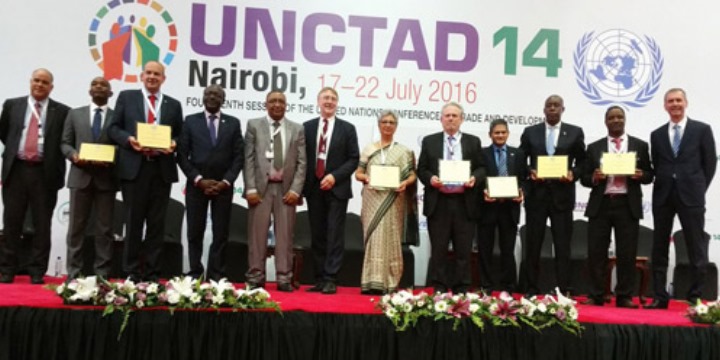 The Minister of Trade and Industry, Dr Rob Davies says investors recognise South Africa as a regional hub and gateway into the African Continent and government is strengthening its Investment strategy to provide a one stop service to all investors. The Minister said this when he was receiving the Global Investment Promotion Agency (IPA) Award at the World Investment Forum and the UNCTAD 14 Conference on behalf of InvestSA. The award seeks to recognise best practice in IPAs or association of IPAs in forging partnerships to promote FDI that contributes to sustainable development.

Since 2002, UNCTAD has been presenting Investment Promotion Awards, recognising best practices and achievements of IPAs. The 2016 award was in terms of excellence in partnering for investment promotion.

Minister Davies said that with the establishment of InvestSA, Government has enhanced Intergovernmental Coordination and Facilitation to fast track, unblock and reduce red tape.  InvestSA is supported by an Inter-Ministerial Committee (IMC) on Investment and this approach is beginning to yield results. This is a proud moment for South Africa and significant achievement for InvestSA to be declared the winner from 51 Investment Promotion Agencies.

Minister Davies commented that InvestSA is now leading the investment promotion and facilitation efforts in government.

“This Global Award follows similar accolades that InvestSA has garnered in a short time. The InvestSA approach is a public private sector initiative of President Zuma that allows for business and the public sector to work together in facilitating increased investment. InvestSA is leading the overall coordination and facilitation of unblocking, fast tracking and reducing red tape in government,” added the Minister.

The award recognised the efforts of InvestSA to provide focussed support in attracing investment projects in the green economy and sustainable development. InvestSA partnered and facilitated with a number of government departments, agencies, regulatory bodies, DFIs, banks, investors, industry associations and communities to facilitate investments in this sector. These include amongst others the facillitatiion of investment projects of ACWA Power Concentrated Solar Plant in Bokpoort, Northern Cape, DCD Wind Towers in COEGA, Eastern Cape to GRI Blade Component facility in Atlantis, Western Cape. InvestSA was instrumental in providing support, coordinating across the levels of government and in nuturing parnerships in rolling out these investments.

Minister Davies further stated that we continue to be able to attract major investment projects and facilitate them into South Africa.

Government is committed to improving our investor servicing and South Africa’s investment climate. The Global Award is a significant boost to our investment attraction efforts and making South Africa a destination of choice.