The large and busy ports of KwaZulu-Natal inevitably attract a good proportion of investor interest, but the varied opportunities that the province holds for good business propositions goes far beyond Durban and Richards Bay, which is also home to the Richards Bay Industrial Development Zone.

The Provincial Government of KwaZulu-Natal intends establishing one industrial park within each of the province’s 10 district municipalities, focussing on existing strengths. These industry-focused hubs will attract new investments and help existing businesses through economies of scale and by improving access to markets and supply chains.

There is one metropolitan municipality in KwaZulu-Natal. Construction on the industrial park in the eThekwini Metropolitan Municipality, an automobile supplier park, is expected to begin in 2019.

In most of the other areas, land has been secured and feasibility studies have been completed. The design of the parks and the provision of infrastructure is currently under way and some tenants have been identified. The Department of Economic Development, Tourism and Environmental Affairs is the implementing agency on behalf of the Provincial Government.

Possible investment opportunities in these districts have been identified by Trade & Investment KwaZulu-Natal (TIKZN):

The economic powerhouse is Newcastle: coal-mining, steel processing, chemicals and textile manufacturing are major activities. Some old coal mines are being reopened by new coal companies. The rail line to Gauteng runs through the area and the R34 carries road traffic to Richards Bay. Game farms, trout fishing and hiking are part of an attractive package for tourists, and Zululand is popular for cultural experiences and the area is rich in Anglo-Boer War history.

Possible investment: the cultivation and processing of soya beans. South Africa has a high demand for oilseed cake but the country is a net importer of soybean products.

Possible investment: the HGDA believes that niche sectors such as avi-tourism (birding), rail tourism and mission tourism hold great potential. Ten percent of the milk produced in South Africa comes from this area, and volumes are set to grow.

The N2 is the main arterial running through the district, giving excellent access to both Durban and Richards Bay. The Dolphin Coast is a major node for tourism. With the King Shaka International Aiport (KSIA) and the Dube TradePort lying just south of the iLembe District in the eThekwini Municipality, a partnership has been created between the two municipalities and the provincial government to develop a renewable energy technology innovation hub. Enterprise iLembe (Pty) Ltd drives investment into the area. At Ndwedwe, 26 biodigesters produce gas for cooking as part of the Working for Energy programme of the South African National Energy Development Institute (SANEDI).

Possible investment: a 250-room resort, Nonoti Beach Resort, at KwaDukuza (formerly Stanger). This would include self-catering units, a conference facility and six restaurants.

The Richards Bay Industrial Development Zone (RBIDZ) is located within the district municipality and is a major economic node in itself because of its huge coal export terminal, deepsea port and aluminium smelters. Mining is an important sector in this region. The other major urban centre is Empangeni which has several educational institutions, including the University of Zululand.

Excellent beaches, a sub-tropical climate and good tourism infrastructure make the South Coast a very attractive destination. Large towns include Port Shepstone and Margate, which has an airport. The Ugu South Coast Development Agency is dedicated to supporting inward investment. Bananas are the main product of a thriving agriculture sector. One banana farm has successfully been converted into a speciality coffee producer. Beaver Creak makes about seven tons of coffee every year near Port Edward, just south of which Caribbean Estates offers accommodation at the mouth of the Umtamvuna River on the KwaZulu-Natal/Eastern Cape border.

Possible investments, both at Umtentweni Beach: Hibberdene mixed-use development including a service station, residential and commercial components; John Mason Park, an area with sea frontage, conference and amphitheatre facilities, a 100-room hotel, residential units, a water park and a skate park. Ugu District has three industrial estates – Shelley Beach, Marburg and Ifafa (being developed). Furniture manufacturing could be a good option, taking advantage of the nearby plantations. In agri-processing there is scope for expansion of timber and sugar cane and for the processing of tea tree oil and aloe essential oils.

This is a fertile agricultural region, producing sugar cane, fruit, animal products, forestry and dairy products. Pietermaritzburg is the provincial capital and home to a major aluminium producer along with several manufacturing concerns, including textiles, furniture, leather goods and food. The city has good transport links along the N3 national highway, excellent schools and a lively arts scene. The Midlands Meander is a popular tourist destination.

Possible investment: the manufacture of polysilicon for PV solar energy installations at Pietermaritzburg. The project is at the conceptual stage.

Industrial park focus: to be decided

The Isimangaliso Wetland Park extends 220 km along the northern reaches of the province, to the border with Mozambique, and offers unrivalled birding, game viewing, deep-sea fishing, turtle tours, kayaking and whale-watching. It is a World Heritage Site and, together with the Hluhluwe-uMfolozi Game Reserve, forms the core of the tourism and conservation offering in the province. With agriculture the other dominant economic activity in the area, any new investment would have to be ecologically sensitive.

Industrial Park focus: to be decided

The area hosts one of the most important historical sites from the colonial era, Isandlwana. The N3 highway, a vital corridor of trade and traffic between KwaZulu-Natal and Gauteng, runs through the district and would support logistics operations. The chief town is Dundee which was founded because of the presence of coal. The Majuba TVET College has a campus in the town.

Possible investment: the cultivation and processing of soya beans. South Africa has a high demand for oilseed cake but the country is a net importer of soybean products. This project is in the concept phase but initial thinking is to have facilities in two districts in the north of the province.

Larger towns include Estcourt, Colenso and Ladysmith. Predominantly rural, the district encompasses two of the greatest natural assets in the province in the Thukela River and a part of the Drakensberg mountain range, which attracts hundreds of thousands of visitors. Sumitomo Rubber Industries and Defy are manufacturing companies with a presence in the Alfred Duma Local Municipality, which also hosts TVET college facilities.

Possible investment: the Alfred Duma Local Municipality offers industrial stands to new investors at good rates; the development of a cableway system in the Drakensberg (near Bergville) with entertainment and accommodation facilities.

Zululand is a popular destination for cultural experiences and the area is rich in Zulu history and Anglo-Boer War history. Vryheid and Ulundi are the main towns. Much of the area falls under traditional authorities and it is predominately rural.

Possible investment: Agri-processing and tourism are the main sectors that are most suitable for investment. Development of a heritage site at Nongoma to serve as a catalyst for other sites to offer traditional Zulu experience, encompassing arts and crafts, agri-processing, traditional medicines and cosmetics and leveraging the profusion of aloe plants in the district.

To request information about any of the potential investment opportunities mentioned above, please contact Trade & Investment KwaZulu-Natal. 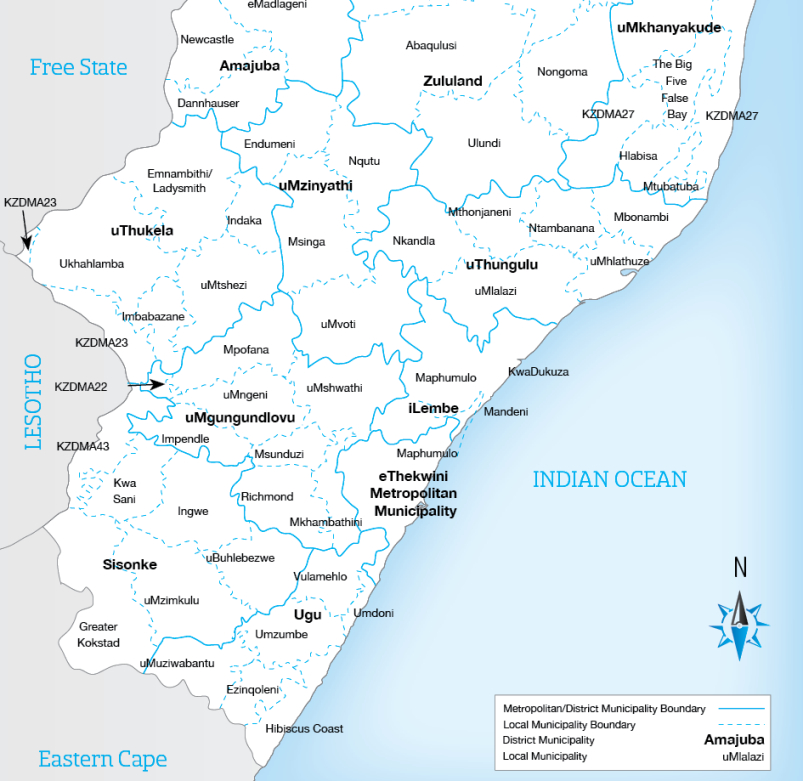