The Eastern Cape has superb beaches and magnificent game parks and nature reserves. The fact that parks such as the Addo Elephant National Park are malaria-free at all times is an additional selling point for foreign visitors.

Port Elizabeth is the end-point of the famous Garden Route, which extends westwards to Cape Town. Golfers in search of the rare pleasures of links golf have two courses to savour in Port Elizabeth (Humewood Golf Club) and St Francis Links, just an hour down the coast.

East London has its own fine beaches and is the logical starting point for trips to the magical Wild Coast. The interior of the Eastern Cape is home to several high-end private game reserves such as Shamwari, Mount Camdeboo and Kariega Game Reserve.

Some luxury game lodges are located within national parks, such as the Gorah Elephant Camp, which is run by Hunter Hotels and forms part of the Addo Park. Luxury brands sometimes create a chain for their customers, so visitors might stay at the boutique Summerstand hotel in Port Elizabeth, No5 By Mantis, on their way to another Mantis property, the Oceana Beach and Wildlife Reserve.

The Eastern Cape Parks and Tourism Agency runs 34 provincial nature reserves within the province. The Addo Elephant National Park is arguably the province’s greatest attraction and is under the control of South African National Parks. Addo extends over 180 000 hectares on land (with thousands more square metres in the marine reserve) and attracts more visitors than East Africa’s Serengeti National Park.

Addo uniquely offers visitors the opportunity to view the Big Seven, as it has more than 650 elephants, along with the rest of the Big Five. The park includes a marine section where great white sharks and whales can be sighted. The Camdeboo, Mountain Zebra and Garden Route national parks offer terrains ranging from dry Karoo veld and rolling mountain plateaus to forests on a rocky coastline.

In addition to all of these natural treasures, the Eastern Cape has a strong history and culture offering. More than a century of interaction between British colonial forces and Xhosa-speaking groups created a frontier zone that today is rich in historical interest.

The Mandela Bay Development Agency has started an initiative in Port Elizabeth that relates to the struggle against apartheid. Oliver Tambo, Govan Mbeki, Steve Biko and Winnie Madikizela-Mandela were among the many Eastern Cape men and women who played major roles in that battle. The MBDA has come up with Route 67, which consists of 67 public art works symbolising the 67 years spent by Nelson Mandela in the service of his fellow man. It starts at the Campanile (a tribute to the 1820 Settlers from Britain) and forms part of the greater Nelson Mandela Bay Arts Journey. It passes the Great Flag on the Donkin Reserve.

The famous steam train, the Apple Express, made a modest comeback in December 2017 when a special train ran along the narrow gauge between King’s Beach and the Port Elizabeth airport. Funding was provided by the municipality, but a lot of hard work was done by volunteers to get the old train back on track. Re-branded for the occasion as the Nelson Mandela Bay Steam Train, the plan is to extend the line to the large regional shopping centre on the western edge of the city, Bay West. The railway used to haul fruit to Port Elizabeth from the Langkloof valley.

King’s Beach is the focus of another important plan to boost tourism. Transnet National Ports Authority has confirmed that it will transfer its manganese export facility at the Port of Port Elizabeth to the neighbouring Port of Ngqura by October 2023. The manganese currently lies in the harbour next to the tourist beach. When the facility is relocated, there will be a chance to link the edge of the harbour (which already has some tourist facilities and a yacht basin) with the popular beach and so create a waterfront with restaurants, shops and bars.

South Africa’s large branded hotel groups have a strong presence in the Eastern Cape but there are also groups whose focus is more concentrated on the province (like the Kat Leisure Group) together with independent hotels and resorts such as East London’s Blue Lagoon Hotel and Conference Centre, located in a prime spot at the mouth of the Nahoon River.

Kat Leisure Group’s offering extends from the well-known Kennaway Hotel, which has been a feature on East London’s beachfront for many years, to the Queens Casino and Hotel in Queenstown and accommodation options in the mountainous interior of Katberg and Hogsback.

Many resorts take advantage of the beautiful bays and inlets of the Eastern Cape, both along the Wild Coast, and nearer to cities, such as the Mpekweni Beach Resort which is located between Port Alfred and East London.

The Eastern Cape Gambling and Betting Board issues gaming licences and regulates the industry in the province.

The Radisson Blu in Port Elizabeth offers five-star luxury overlooking Pollock Beach and it is close to the renowned Humewood Golf Club. The modern 14-storey building has 173 rooms and suites.

Sun International has properties on the provincial border with KwaZulu-Natal (the Wild Coast Sun Resort and Casino) and the five-star Boardwalk Casino and Entertainment World in Port Elizabeth. Located close to the Blue-Flag Hobie Beach, the Boardwalk has won awards for excellence for its meetings, exhibitions and special events. In 2017 Sun International announced that Fish River Sun and Country Club Resort near Port Alfred was closing. It is possible that the resort could be transferred to the state with the intention that it be transferred to the beneficiaries of a land claim.

Tsogo Sun has five Eastern Cape properties. In East London the four-star Southern Sun Hemingways is next to the Hemingways Casino complex and the city has one Garden Court, as does Mthatha. Port Elizabeth has a Garden Court and a SUN1, both near Humewood Beach.

City Lodge has one property in East London and five in Port Elizabeth, across four brands.

Along the beachfront at Summerstand can be found the Protea Marine, a 173-room Radisson Blu and the Beach Hotel. The last-named hotel is run by the Port Elizabeth Hotel Group which also has in its portfolio Hacklewood Hill Country House, The Sands @ St Francis and Pumba Private Game Reserve.

The FIFA World Cup hosted by South Africa in 2010 created a surge in the number of foreign visitors to the country. The Eastern Cape hosted 260 000 foreign visitors in that year and the province became a favoured destination for international travel agents. In 2017 foreign visitor numbers ticked upwards close to the 2010 peak, and a focus on events is one of the reasons for this trend.

Grahamstown hosts the National Arts Festival every year, an 11-day extravaganza of performance art, music of every sort, art exhibitions, film, lectures, craft fairs and workshops. More than 240 000 people attended the 2015 festival and a study has put the economic impact of the festival at R349.9-million.

Port Elizabeth hosts matches in the international Super Rugby series. The provincial tourism body calculates the public relations value of the rugby hosting as R18-million with an “economic spin off in excess of R150-million”. Port Elizabeth maintained its reputation for “firsts” when it hosted South Africa’s first-ever day-night cricket Test match in 2017. With brand-new lighting of the latest design, St George’s Park cricket ground was illuminated to the highest international standards. The innovative lighting system will now give events organisers options that never existed before in terms of lighting shows and coordinated lighting programmes that can be tuned to musicians’ needs. 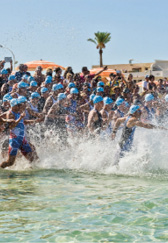 Another major feather in Port Elizabeth’s cap is the decision by the international 2018 IRONMAN 70.3 World Championship to designate official qualifier status to an event to be held on the first two days of September 2008. Hobie Beach will be the main focus of the event, as it is for the Standard Bank IRONMAN African Championship which has been held since 2015. The city held its first IRONMAN event as far back as 2004.

Enthusiastic crowds of up to 80 000 have been known to line the route and the event will undoubtedly be a fillip for the local economy. More than 6 000 athletes are expected to participate.

Other popular events in Port Elizabeth include the Herald Cycle Tour and the Ocean Racing Series (a world championship).

Buffalo City has its own IRONMAN 70.3 triathlon. In 2018 the 11th running of the event was held in the last week of January, and East London is home to several other popular cycling and running events.

Originally published as a Special Feature by John Young, in the 2018 edition of Eastern Cape Business.