Mpumalanga means “the place where the sun rises”. The province lies north of KwaZulu-Natal and shares borders with Swaziland and Mozambique. It constitutes 6.5% of South Africa’s land area. In the north it borders on Limpopo, to the west Gauteng, to the south-west the Free State and to the south, KwaZulu-Natal. The provincial capital is Mbombela.

More than 80% of South Africa’s coal is sourced in Mpumalanga. Other minerals found in the province include gold, platinum group minerals, chromite, zinc, cobalt, copper, iron and manganese. 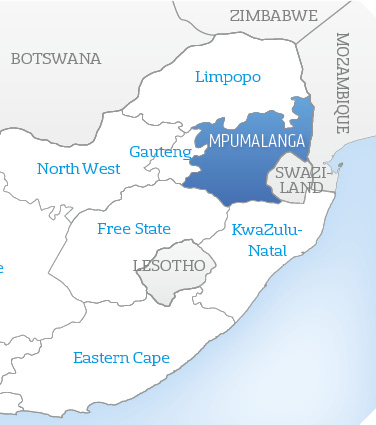 South Africa’s major power stations, three of which are the biggest in the southern hemisphere, are in Mpumalanga. The building of the new Kusile power station is one of the biggest infrastructure projects in the country’s history.

The province recently welcomed the first students to the University of Mpumalanga.

The Maputo Development Corridor is a transportation corridor comprising road, rail, border posts, port and terminal facilities, running from Pretoria in Gauteng through Mpumalanga to the Port of Maputo in Mozambique.

South Africa’s biggest tourist attraction, the Kruger National Park, is mostly in Mpumalanga. Several investment projects aimed at providing infrastructure in the tourism sector have been put forward by the Mpumalanga Economic Growth Agency (MEGA). Heritage and Cultural Tourism are two of the focus areas in the provincial plan because Mpumalanga is already a leader in nature reserves and parks.

Large investments are under way on the railways that run to and through Mpumalanga. This includes upgrading the commuter railway linkages to the province from neighbouring Gauteng and building new railway lines to transport coal through Swaziland and on to either Richards Bay or Maputo in Mozambique.

The climatic contrasts between the drier Highveld region, with its cold winters, and the hot, humid Lowveld allow for a variety of agricultural activities. More than 68% of Mpumalanga is used for agriculture.

Most of the province receives summer rainfall, often via thunderstorms. Frost is common on the Highveld, but is almost absent in the subtropical regions where fruit, nuts and citrus thrive. Crops include maize, wheat, sorghum, barley, sunflower seed, soya beans, groundnuts, sugarcane, vegetables, coffee, tea, cotton, tobacco, citrus, subtropical and deciduous fruit. A large proportion of South Africa’s grain, citrus, sugar and soft fruits come from Mpumalanga. The province is an exporter of macadamia nuts, a sector that is growing at a remarkably fast pace.

The province’s rich agricultural produce is used by companies such as McCain, Nestlé and PepsiCo and there are also pulp and paper plants (Sappi and Mondi), fertiliser facilities and textile manufacturing concerns. The decision by Sappi to start producing dissolving wood pulp at its Ngodwana Mill has significantly increased the manufacturing capacity of the province. York Timbers is a leading forestry company and the sugar mills and refinery of RCL Foods are large contributors to the provincial economy. Forestry is extensive around Sabie.

The province lies at the southern end of the eastern limb of the Bushveld Igneous Complex. Chromite, magnetite and vanadium are found in significant quantities in the province. The ferro-alloy industry is centred on the town of Middelburg. Deposits of chromite, magnetite and vanadium in this area are the basis of the ferro-alloy complex in Witbank-Middelburg and Lydenburg. Nkomati Mine is South Africa’s only pure-nickel operation. The province’s coalfields are in the south and west of the province.

The restarting of the Evraz Highveld steel mill in 2017 was good news for the regional economy, after the company went into business rescue two years before.

The province also hosts large companies in the manufacturing sector, with internationally renowned firms such as Sasol (synthetic fuels and chemicals) and Xstrata (ferrochrome) having large operations in the province.

Sasol, the integrated oil, gas and chemicals company, runs several plants at Secunda. Products manufactured at the complex include synthetic fuel, petroleum, paraffin, jet fuel, creosote, bitumen, diesel and lubricants. Sasol’s coal liquefaction plant is also located in the town of Secunda. The primary feedstock for synthetic-fuel production is coal, and the plant is located in the heart of Mpumalanga’s coalfields.

A major goal of the provincial government’s Mpumalanga Economic Growth and Development Path (MEGDP) is to expand the industrial base of the provincial economy. The focus is on beneficiation, agri-processing and value chain development.

The Provincial Government of Mpumalanga has been talking to several foreign countries about investments in the province. An assembly plant for Minsk Tractor Works is one of the outcomes of this activity, and several agreements relating to training and trading have been signed. Russia, Belarus, China and Oman are some of the countries with which Mpumalanga is engaged. The Mpumalanga Economic Growth Agency hosted a People’s Republic of China Business Forum which was attended by 19 large Chinese companies.

An ambitious plan to develop a Special Economic Zone (SEZ) at Nkomazi is under way. The area is close to both Mozambique and Swaziland and lies on the Maputo Development Corridor that links the economic powerhouse of South Africa (Gauteng) with the ports and gas supplies of Mozambique.

There is relatively little agri-processing that takes place in the province, with most of the products being exported in their raw state. The Fresh Produce Market in Mbombela is planned to accommodate investors who want to start factories to manufacture products such as juice, or packaging firms. Land has been bought and registered for the required use in Mbombela as the Mpumalanga International Fresh Produce Market.

Investors in fresh produce are invited to be take advantage of Mpumalanga’s superior fruit, vegetables and nuts.