Highlights of the dinner included the launch of the first Durban Business Code of Ethics, which encourages businesses to come on board the Ethics Revolution by owning up first and putting up their hands against any unethical behaviour. 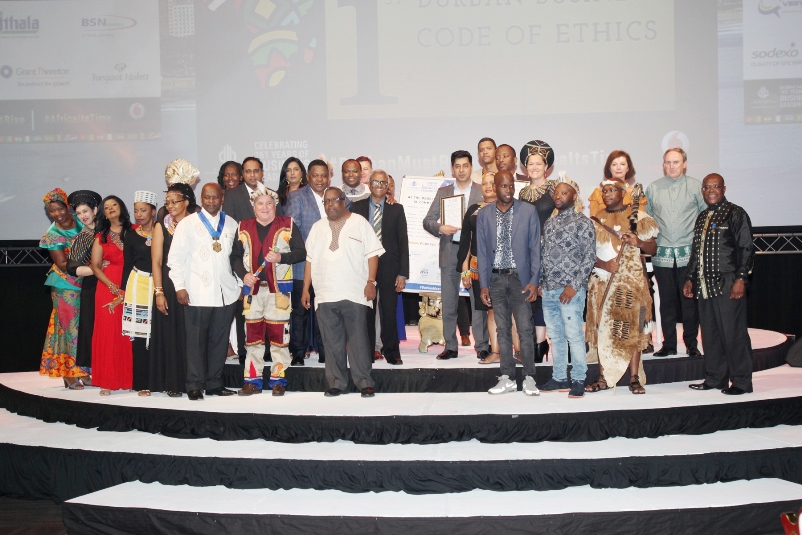 The Durban Chamber of Commerce and Industry (DCCI) was established 161 years ago and has held an Annual Gala Dinner every year during this time. Not surprisingly, the event is regarded as a highlight in the Durban (and KZN) business calendar. Following on from the World Economic Forum held in Durban earlier this year, the theme for the 161st Annual Gala Dinner was “Africa, it’s time”, in line with the recognition that Africa is the next economic frontier.

There is a renewed sense that Business leadership will be critical in this dispensation to ensure that Africa turns its fortunes to the benefit of all her inhabitants. We would like to thank our platinum partners, Vodacom, and our gold partners, ECR and The Mercury for their continued support. Both the Mercury and the Durban Chamber of Commerce and Industry are celebrating over 160 years of business leadership.

Song and dance carried the colossal theme throughout the evening as guests were taken on a cultural journey through Africa. The production that was lead by eThekwini’s living legend, founder of kwaMashu Ekhaya Multi Arts Centre, Mr Edmund Mhlongo who is also the brainchild of the cultural musical spectacular “Bayede Shaka: The Spear Is Born.

South African activist, actor, storyteller, poet, playwright, director and author, Gcina Mhlophe mesmerised the audience as she programme directed through rich storytelling, a culture that is a profound tradition throughout Africa. Gcina’s is one of the few woman storytellers whose business success can be told through her charismatic poetic performance. Jacquie Bhana complimented Gcina as co-programme director as she added the business narrative to the programme. Jacquie who is currently the Chair of the Human Resources Forum at the Durban Chamber, where she has played an active leadership and advocacy role. She also serves on the Chamber’s Council.

The dinner also saw the inauguration of the Chamber’s new leadership whose vision is, “In Business for a better world”. Mr Musa Makhunga, Managing Director of HR Matters, was inaugurated as the Chamber’s new president. He succeeds Mr Zeph Ndlovu who took the helms in 2015.

In his inaugural address Musa outlined that the Durban Chamber would become leaders in leading business towards “Profits with Conscience”. Makhunga said “There is a view that Government finds itself having to deal with the economic conditions alone without visible business involvement. It is for this reason that we believe the Business Community and Government should stand together in addressing these issues. In our view this can only happen if we realise and accept that both Government and Business seek to develop a prosperous society. This could be expressed as profice or service delivery by Business and Government, respectively. If both Government and the Business Community agree that they are both in Business for a better world, our City can easily work towards making Durban no.1 or no.2 in terms of contributing to the national GDP. As DCCI leadership, we are committed to facilitating this City’s economic growth by creating conversation platforms where meaningful engagements could take place. We have area and sectoral fora which we are earmarking for these. We are even prepared to consider other innovative ways for Business and Government to engage, converse and dialogue more.”

Highlights of the dinner included the launch of the first Durban Business Code of Ethics, which encourages businesses to come on board the Ethics Revolution by owning up first and putting up their hands against any unethical behaviour. The Chamber has appealed to businesses to subscribe to being ethical, bringing the realisation to other stakeholders, that while corruption does not pay, but good ethics do.

The Code is designed around eight main principles namely:

The keynote address was delivered by Mr Eric Tocknell, who is the founder of Wimpy Restaurants Group in the Southern Hemisphere. This visionary leader is relentless in his efforts to release the economic genius in every person he can reach as he is convinced that, “It is Time for the Sleeping Giant of South Africa to Arise.”

Eric wowed the audience, reminding them that the driving force that makes the great, great amounts to more than just inordinate ideas and wealth, it is “the ability to think big, act big and be big. If your dreams do not frighten you then they are not big enough. Your dreams should make hairs stand on your skin when thinking about them; they should ignite a fire in you that motivates you to chase them daily. Refuse to do nothing, refuse to limit yourself to anything that hinders you moving forward and most importantly, refuse mediocrity”.

The Durban Chamber’s 161st Annual Gala Dinner was indeed an incredible night that reminded each one of us that in Africa, we have enough; we are enough, challenging everyone to take their rightful place to ensure that #DurbanMustRise.

If you require more information about the 1st Durban Business Code of Ethics, please email marketing@durbanchamber.co.za.