Contributors to the KwaZulu-Natal mining sector

Mining was responsible for about 2% of KwaZulu-Natal’s gross domestic product (GDP) in 2013, which is to say R9.3-billion. Half of the province’s mining output (and 3.3% of South Africa’s) comes from Richards Bay Minerals (RBM).

RBM mines the minerals sands of the northern KwaZulu-Natal coast and operates out of Richards Bay. The main products of the RBM mine are zircon, rutile, titania slag, titanium dioxide feedstock and high-purity iron. Of the approximately two-million tons of product that RBM has the capacity to produce annually, 95% is exported.

Titanium dioxide adds opacity to paints, fibres and plastics and it is also vital to the pigment industry.

Rio Tinto owns 74% of RBM. Weak global demand meant that overall production of titanium dioxide slag by Rio Tinto (including their Canadian operations) was down 25% in 2015. One of the four furnaces at RBM has been idled in response to this reduced demand.

Since the deal to develop the Fairbreeze mine and smelter was signed between Canadian company Tronox and South African resources company Exxaro in 2012, $225-million has been spent on the project. The mine came on line in the fourth quarter of 2015, on budget and ahead of schedule, replacing the closed-down Hillendale mine. The final $50-million will be spent in the course of 2016. Feedstock for the slag furnaces near Empangeni is ilmenite and it produces zircon and pig iron, amongst other mineral products. China is an enthusiastic buyer of zircon, but growth in that country has not been as fast in recent months as was the case for several years up to 2015.

KwaZulu-Natal is home to one aluminium smelter (there were two in Richards Bay until Bayside closed in 2015), Arcelor Mittal has a large steel-making plant in Newcastle and Tata Steel KZN manufactures high-carbon ferrochrome at Richards Bay. Safa Steel has a fairly new metal-coating factory in Cato Manor. Hulamin makes rolled products at three sites in the province while the Pietermartizburg facility also makes extrusion products.

The provincial government is keen to promote the downstream beneficiation of metals within the Richards Bay area. A feasibility study on establishing a Metals Hub returned a positive verdict.

A small-scale mining Imbizo was held in August 2015 to look into regulations, access to funding, and technical support mechanisms for small-scale mining. Since then, the province has produced the KZN Mineral Beneficiation Strategy. The first area of focus is coal and phosphate.

There is a provincial commitment to using waste material from the mineral sector as a source for beneficiated building materials and five commodity value chains are going to be examined in detail, namely Aluminium, Coal, Iron and Steel, Phosphates and Mineral Sands.

Some of the province’s coalfields have been revived and the export facilities at Richards Bay make a massive contribution to the functioning of the country’s mining sector.

Petmin’s Somkhele Anthracite Mine, north of Richards Bay, has one of the biggest reserves of open-pit anthracite in South Africa, with measured and indicated reserves of more than 51-million tons across its four areas.

Although the second six months of 2015 saw some reduction in production due to geological conditions, the mine still produced more in the year than the benchmarked annual figure of 1.2-million tons of metallurgical anthracite for ferro-alloy smelting. Somkhele also mines a lower-grade coal, what is known as ‘energy coal’. Its annual capacity for this type of coal is about 350 000 tons: in the six months to December 2015, production was 8% down on the previous year (namely 157 000 tons).

Umzimkhulu Industrial Holdings obtained new mining rights in the course of 2015, from the national Department of Mineral Resources. The company has the rights to mine near Port Shepstone and the provincial government put the value of the investment at R187-million, with the creation of 48 jobs.

The northern region has deposits of aluminium and calcitic marbles. Some low-grade bauxite is found. Vein gold mining is undertaken near the northern border with Mozambique. The Umzinto goldfield has several sites, but mining has only ever been on a small scale. Sand and aggregate are produced by Vryheid-based WH Lemmon-Warde Holdings, Lafarge and Afrisam. Corobrik has several facilities in and around Durban.
Published in the 2016-17 edition of KwaZulu-Natal Business 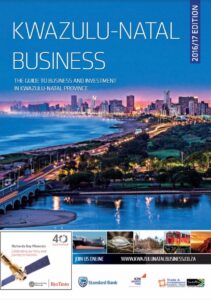