Team South Africa is encouraged to clean up rivers, lakes, streams, dams, wetlands and all other freshwater sources during the month of July (Mandela Month).

The need for water security, particularly in the face of global climate change and a multitude of anthropogenic impacts affecting our rivers, calls for a national and unified approach to protect our rivers, wetlands and broader catchments, such that all people can benefit from the added-value products of healthy rivers and can have access to clean water for basic human needs. It is for this reason that the Department of Water and Sanitation (DWS) would like to connect South Africans to their sources of water and the natural infrastructure that are crucial for a water secure future.

DWS together with the Worldwide Fund for Nature (WWF), one of the world’s largest and most respected independent conservation organisations, with almost 6 million supporters and a global network active in over 100 countries, the Strategic Water Partnership Network as well as the National Business Initiative (NBI) that has an affiliation of hundreds of South African corporates; are the official partners to the DWS in the Clear Rivers Campaign. 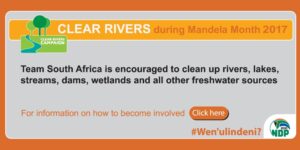 The campaign will take place during the month of July 2017. It will be closely associated with volunteerism that is promoted during July, as part of the Mandela Month activities.

For more information about getting involved in the Eastern Cape, please contact Amatola Water.