Transforming the wildlife sector and creating opportunities for communities and small businesses in tourism sector are priorities for national and provincial authorities.

Supporting local businessmen and women to enter the formal tourism market is part of the Industrial Development Corporation’s brief. The IDC backed local entrepreneur Mofasi Lekota in his hotel venture in the provincial capital, Park Inn by Radisson Polokwane. The development finance institution is also getting behind projects in Magoebaskloof and Thohoyandou.

Almost 70% of South Africa’s number one tourist attraction, the Kruger National Park, falls in Limpopo, and yet relatively few local communities benefit materially from the park, beyond wage earning.

In 2018 the celebration of the International Day of Tourist Guides was hosted by the Limpopo Department of Economic Development and Tourism (LEDET) at the Mopani rest camp in the Kruger National Park. At this gathering, the National Department of Tourism announced a new approach to supporting small, micro and medium enterprises (SMMEs). Incentives and market support are to be offered in order to compete in the global market. Tour guiding is seen as an area with strong growth potential. The National Registrar of Tourist Guides works within the department.

Wildlife farming and hunting generates enormous amounts of money, but South Africans who were previously excluded by law still have very little access to this sector. According to calculations done by a Professor in Tourism at the University of the North West, Peet van der Merwe, trophy and biltong hunters contributed a combined R13.6-billion to the South African economy in the 2016/17 season.

The number of direct jobs created in this period in Limpopo was 17 806 (The Conversation). In 2018, the formal wildlife auction turnover for the whole of South Africa was R750-million, as reported by Yolande Groenewald in the Mail & Guardian. A buffalo bull was sold in 2016 for R178-million. LEDET aims to create wider opportunities within these sectors via its Wildlife Transformation Policy.

When President Ramaphosa visited Limpopo in 2017, it was to launch the National Biodiversity Economy Programme. Planners believe that the biodiversity economy can achieve an average annualised GDP growth rate of 10%. Limpopo is rich in natural resources and heritage.

Between 2014 and 2018, Limpopo received more than 27.5-million domestic travellers and 8-million international tourists. As more infrastructure is rolled out and partnerships created between the public and private sectors, more investment and job opportunities will result.

According to the Limpopo Premier’s office, the tourism sector employs about 22 414 people. The 5-in-5 strategy aims to increase visitor numbers to five-million in five years.

A new event on Limpopo’s calendar caused great excitement in 2018 with the first riding of the Tour de Limpopo, a four-day UCI Africa Tour 2.2 stage race which started and finished in Polokwane, with a stopover in Tzaneen. A range of sponsors enthusiastically endorsed the race, promoted by the Limpopo Tourism Agency (LTA). Hotel@Tzaneen and Europcar South Africa were sponsors and race officials were provided with cars by Audi Centre Polokwane.

Regular events are holding their own as well: the annual Limpopo Marula Festival in Phalaborwa attracts more than 30 000 participants and is estimated to inject upwards of R45-million into the provincial economy. Several neighbouring countries are well represented in the attendees and 13 co-operatives operating under the Mukumbi Industries brand normally brew about 12 000 litres of marula beverages for the thirsty crowds. Other marula products are also sold such as nuts, body lotions, jam, cooking oil and soap.

The LTA also backs the Mapungubwe Festival, which is growing in stature every year. In addition to the popular musical performances, crafters have an opportunity to display their crafts and generate good income during the festivities.

Kruger, Mapungubwe and Marakele are all national parks and they are run by South African National Parks (SANParks). There are a further 53 provincial nature reserves managed by the Limpopo Department of Economic Development, Environment and Tourism (LEDET). Many of these reserves are communally owned but jointly managed by the province and communities. The combined land area of Limpopo’s national, provincial and private game and nature reserves is 3.6-million hectares.

The provincial government has committed to enhancing the value of Limpopo’s two UNESCO World Heritage Sites, Makapans Valley and Mapungubwe, where the superbly crafted little golden rhinoceros, a relic from medieval times, was found in 1932. This is also a priority programme in the National Tourism Sector Strategy. The Waterberg Biosphere Reserve is a UNESCO protected site. 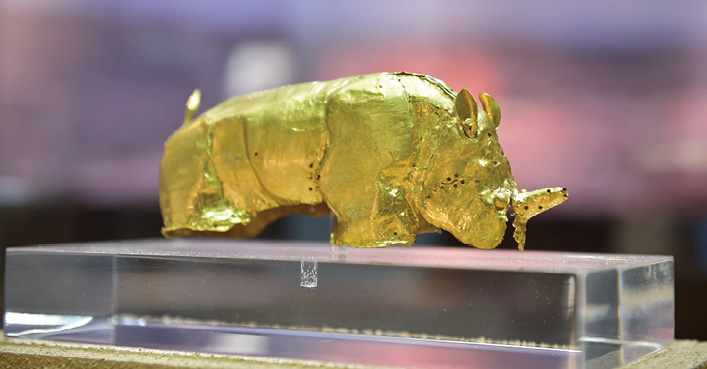 A new drive to promote home-stays is underway in the northern part of the province. Getting tourists to eat mopani worms and learn about local traditions and cultural practices would help to generate income for villages and hamlets otherwise outside the mainstream economy.

In support of the arts and culture sector, a potential area of growth for tourism in Limpopo, a performance theatre is to be built in Polokwane.

The South African Golf Tourism Association says that up to 10% of visitors to the country are attracted by its golf courses, and Limpopo’s offering has been extended and improved in recent years. At the high-end of the luxury offering are the Zebula Golf Estate and Spa (west of Bela Bela) and the Legend Golf and Safari Resort.

Adventurous visitors can choose from off-road biking, hunting, elephant rides and tough 4×4 trails. A vast array of different cultures can be experienced, from the Rain Queen and her people in the central districts, to the myth-inspired art of the Venda in the north, to the bright geometric house designs of the Ndabele people in the Sekhukhune District.

The 160-room Park Inn by Radisson Polokwane has opened in the provincial capital. Located near the golf course and the Peter Mokaba Stadium, the hotel also has conference and event facilities.

The Protea Hotel group has two hotels in the province. The Protea Hotel Landmark in Polokwane has 80 rooms and six conference venues. Just outside the city is the Protea Hotel Polokwane Ranch Resort where guests can walk with lions. The hotel is on a 1 000-hectare nature conservancy and specialises in catering for weddings.

In Mokopane near the Waterberg mountains, the family-run The Park Hotel Mokopane has 125 rooms and can cater for up to 400 conference delegates. The three-star hotel recently added 25 self-catering units.

The Fusion Boutique Hotel in the provincial capital offers five-star quality in 30 en-suite rooms and two exclusive suites. Sun International runs the Meropa Casino and Entertainment World near Polokwane. In the province’s northern regions at Thohoyandou, there is the Khoroni Hotel, Casino and Convention Resort. This is a Peermont venture and there is a three-star Peermont Metcourt Hotel in the complex. The Limpopo Gambling Board regulates the industry and grants licences. The Mopani District was recently granted two new bingo licences.

The most recent casino licence was awarded to Peermont Global Resorts for the official launch and operation of the Thaba Moshate Casino, Hotel and Conference Centre in the Greater Tubatse Local Municipality (above). There are 237 limited pay-out gambling machines in the province, and licences of one sort or another generate more than R50-million for the provincial government. 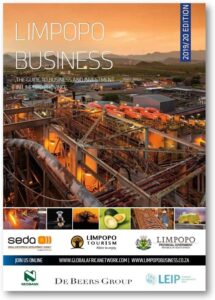