HomeAgriculture, Forestry, FishingAgri-parks and an International Fresh Produce Market – helping farmers get to...

A 2017/18 overview of the Mpumalanga agriculture and agri-processing sector. 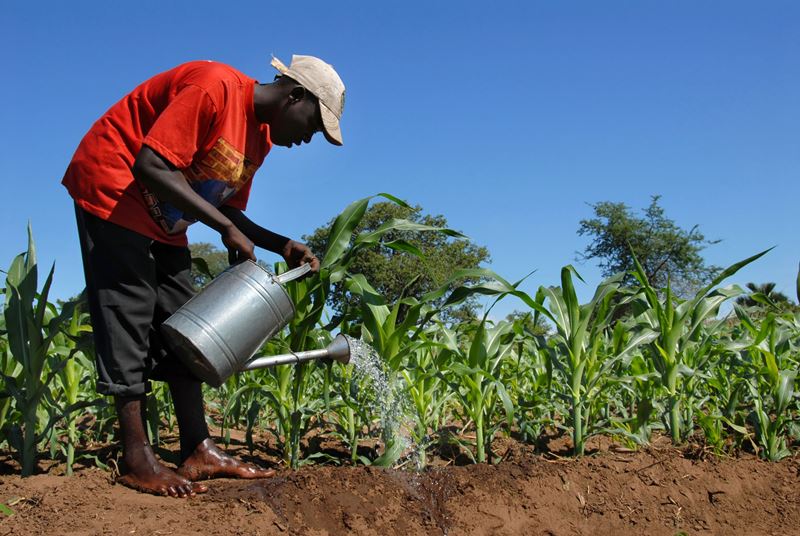 Mpumalanga is one of South Africa’s most productive and important agricultural regions and contributes significantly to the nation’s export basket, with a strong suite in fruit and nuts.

The agricultural sector accounts for 3.3% of the gross domestic product (GDP) of Mpumalanga and for nearly 12% of employment (89 000 people). A separate overview of the forestry sector appears elsewhere in this publication.

Concerted efforts are being made to help emerging farmers grow their holdings and their output, and to connect them to domestic and international markets.

The Provincial Government of Mpumalanga has several programmes such as the Masibuyele Emasimini and Masibuyele Esibayeni (which support subsistence farmers) and the Mpumalanga Fortune 40 Young Farmer Incubator Programme, which plans to commercialise 20 farms.

When complete, 20 SME and 20 youth-owned co-operatives will be actively tilling land and making a business of agriculture. Fifteen farms have been acquired, and infrastructure has been provided on eight so far. Infrastructure in the form of irrigation, broilers, tractors, packhouses and fencing is being provided in the 2017/18 year to the value of R81.9-million. Seven of these farms have started production and are selling their produce to the market.

Agri-parks will be established in each of Mpumalanga’s three districts, as part of the R2-billion plan of the National Department of Rural Development and Land Reform to roll out services that will help farmers get better access to market and storage facilities.

Support in terms of equipment hire and information will be available. Markets where farmers can sell their produce and processing plants such as abattoirs will form part of the parks and farmers will gain access to market information and bigger markets through the Rural Urban Marketing Centre.

Training will also be on offer at the parks and the aim is to get local farmers owning 70% of the facility.

Two Farmer Production Support Units have already been developed by the Mpumalanga Department of Rural Development in Bushbuckridge and Nkomazi municipalities. The Feedlot in Mzinti is complete while the R20-million packhouse in Bushbuckridge is almost ready for use by farmers.

A new concept for the province is the creation of the Mpumalanga Fresh Produce Market, for which there are high hopes. As Premier David Mabuza says, “The Mpumalanga Fresh Produce Market remains a critical platform to stimulate agricultural production, downstream beneficiation and investment opportunities across the agro-processing value chain. At the heart of this initiative is the empowerment of emerging black farmers to access domestic and international markets for their produce.”

The Land and Agricultural Development Bank of South Africa (Land Bank) has set a target of R1-billion which it wants to loan to black investors in agriculture in the 2017/18 financial year. It is targeting big investments which can lead to commercialisation of farming operations, as it aims to help transform the sector.

A land rehabilitation project is under way, with the provincial government in partnership with mining company South32 (formerly BHP Billiton). This will release more land for agricultural use.

Another public-private partnership will allow easier access to market for the chickens produced at the eight poultry houses which the provincial government is to construct for R11-million. An agreement has been signed for distribution to Early Bird Chicken, AFGRI and Super Grand Distribution. This scheme forms part of a larger effort to integrate the poultry value chain, which is being led by the Agricultural Research Council (ARC) in partnership with the Mpumalanga Department of Rural Development and Land Reform.

Mpumalanga produces one-million tons of maize from 291 788 ha. About 53 000 tons of wheat and 33 000 tons of sorghum are produced annually. Soya bean is another major crop: more than half of South Africa’s soya bean crop is produced in Mpumalanga’s Highveld areas. National annual production levels are between 400 000 and
500 000 tons of soya bean.

Mpumalanga accounts for about 21% of South Africa’s citrus production and a third of its export volumes, with Valencias being the province’s most popular varietal and Nelspruit being the centre of the sector. Citrus exports to the EU have grown steadily and by 2015 accounted for 40% of total citrus exports (30% oranges, 66% mandarins, 24% lemons), up from 36% in the prior season.

Avocadoes, litchis, mangoes and bananas thrive in the province. Hazyview is an important source of bananas, with 20% of South Africa’s production originating in this district. About 110 000 tons of avocadoes are produced in South Africa every year, with a high proportion of those coming from Mpumalanga. About 45% of the crop is exported.

Deciduous fruits are cultivated in smaller quantities. The village of Tonteldoos north of Dullstroom hosts an annual peach festival that includes liquid marvels such as peach mampoer. About 15 000 tons of table grapes are produced in the province annually and Mpumalanga produces its own wine.

Potatoes and potato seed thrive in Mpumalanga’s fertile soil, with one operation in the higher reaches of the Drakensberg range producing more than 2 000 tons of seed every year. Tomatoes, onions and cabbage are also farmed profitably.

Cotton is grown mostly under dryland conditions in Marble Hall. The province has 1 500 ha of dryland under cotton.

Much of South Africa’s total annual production of about 34-million kilograms of tobacco, especially Virginia tobacco, takes place in the north-western parts of Mpumalanga, and in neighbouring Limpopo. Several of Mpumalanga’s tobacco farmers have switched to table grapes or citrus in recent years.

Macadamia nuts have grown in popularity as a crop for export exponentially in recent years. South Africa’s production of nuts-in-shell (NIS) has grown from about 35 000 tons in 2012 to an estimated 48 000 tons in 2015. More than 95% of the annual crop is exported.

International production of the nut has been expanding by 20% year-on-year for some time, and this trend is expected to continue for at least another five years, driven by strong demand from Asia.

About 14% of the province’s land area is natural grazing land. Products include beef, mutton, poultry, dairy and wool.

Dairy and poultry do well in the southern parts of the province. Poultry-production companies have large facilities in the Standerton-Volksrust area. The town of Ermelo is the centre of one of the country’s most important sheep-farming districts.

The province is home to one of South Africa’s largest pig farms, Kanhym, near Middelburg. Karan Beef has recently built a large abattoir in Balfour to service its massive feedlot in neighbouring Gauteng. Up to 1 800 head of cattle can be processed every day at the facility. Goats are an important source of protein and milk for many of the rural population and the raising of goats is widespread, especially in traditional areas.

TSB Sugar runs three mills in the Lowveld region, two of which have refining capacity, and employs about 4 700 people. More than 1 400 farmers (commercial and small-scale) deliver sugar cane to the company. TSB brands are Selati (sugar) and Molatek (animal feed). TSB’s three mills (including Pongola in northern KwaZulu-Natal) have been able to maintain volumes because of extensive irrigation schemes. The company was bought by RCL Foods in 2014.

The Akwandze Fund, an initiative of the Liguguletfu Cooperative and TSB Sugar, makes loans for small-scale farmers. Liguguletfu came into existence with small investments from each of the co-op’s 889 members, which eventually amounted to R5-million in share equity. TSB Sugar matched this rand-for-rand. Farmers must join a savings scheme to belong, and Akwandze has more than 1 200 customers.

Nelspruit is the location of one of South Africa’s premier research institutions, the Agricultural Research Council – Institute for Tropical and Sub-tropical Crops (ARC – ITSC) in Nelspruit is a leader in research. Specialising in crop varieties and research into the origin and cure of diseases, the ITSC has had success with avocadoes (new root stock), coffee yields and banana cultivars.

The Lowveld Agricultural College offers a range of diplomas in Nelspruit. A new satellite facility is being developed in the Nkangala District Municipality on the site of the old Marapyane College of Education near Siybuswa. The college offers three-year diplomas and two-year certificate courses in crop production and animal husbandry. Some students go on to study further aspects of agriculture at the University of the North West.

The Buhle Farmers’ Academy has campuses at Delmas and Piet Retief and runs successful training farmers for existing farmers. Trainers like Mposa Agricultural Consultants provide SETA-accredited courses and the academy claims that just 8% of its graduates have remained subsistence farmers, with 53% producing at a commercial level. Funders include Monsanto Fund (USA), the Maize Trust, Standard Bank, Tongaat Hulett Starch and Omnia.

Lebogang Molefe, who completed a poultry production course at Buhle in 2015 and now runs a farm with up to 3 000 chickens per cycle, is quoted on Buhle’s website, “This farm is paying the rent and buying food for our family of four.”