2020 overview of the agriculture sector in the Eastern Cape

Getting small-scale farmers connected to agri-processing value chains is a major goal for agricultural policy-makers in the Eastern Cape.

The creation of a Special Economic Zone (SEZ) on the Wild Coast with a focus on agri-processing is part of a plan to achieve this. If farmers have access to the processing and production of products from meat, milk, wool and leather, greater value will be created and more jobs will become available.

Agri-parks situated strategically around the province support the addition of value: these have been developed at Lambasi, Ncorha, Sundays River Valley, Butterworth, Matatiele and Sterkspruit-Senqu.

The Eastern Cape Department of Rural Development and Agrarian Reform (DRDAR) has several programmes to support small-scale farmers. Sixteen feedlots have been established for livestock farmers. Berlin Beef, a joint government and private-sector export-oriented venture, aims to support transformation by supporting 200 black livestock farmers to participate in the business.

Rural Enterprise Development (RED) hubs are a key plank in the strategy of the DRDAR to promote food security and employment creation. Small-scale farmers are supplied with equipment, infrastructure and training to help them engage with the mainstream economy.

A farming incubator supported by the Thrive Fund of South African Breweries uses its R190-million loan book to support small-scale farmers in seven provinces. FarmSol provides loans and technical support helps farmers get access to value chains. SAB gets its ingredients for beer (barley, hops and maize) from FarmSol beneficiaries.

The Eastern Cape Development Corporation (ECDC) supports agri-processing through loans and equity arrangements: projects that have received financial support include aquaculture, the production of dietary fibre from pineapples and bamboo products. There are about 70 000 people employed on commercial farms across the Eastern Cape, with a further 436 000 people dependent on smaller farms, mostly in the east.

Addo Elephant National Park is home to a great concentration of “spekboom”, the world’s most efficient converter of carbon dioxide. Elephants love to eat it, but it also has become the plant of choice in carbon swops. An international airline will enter a partnership with a game reserve, for example, whereby the game reserve will plant several thousand stems. In return, the airline gets carbon credits.

The National Woolgrowers Association of SA (NWGA), the country’s main producer organisation, is based in Port Elizabeth, as is Cape Wool SA, which used to be known as the South African Wool Board.

The NWGA has a simple motto: “more sheep: more wool” which it tries to achieve through its Production Technology Services which is offered to a membership base of 4 500 commercial and 20 000 communal members. Cape Wools SA is the industry representative of the broader industry including processors, brokers, producers and traders.

The Eastern Cape provides approximately a quarter of South Africa’s milk, and the industry is further expanding as producers are favouring high-rainfall coastal areas such as the Tsitsikamma region of the Eastern Cape. The bigger dairies include Coega Dairy which was founded in 2011 and is situated in the Coega SEZ. It produces the brand Coastal, sells milk to all parts of South Africa and manages the Famous Brands Cheese Company.

Small-scale dairy farming presents an opportunity to develop the industry in the former homeland areas, especially in products such as milk powder, speciality cheeses and long-life milk. Ouma Rusks are still made in the small town where they were invented, Molteno.

Cabdbury Chocolates operates a big site across the lake from the Nelson Mandela Stadium in Port Elizabeth and Nestlé makes 11 kinds of chocolate at its factory in East London. The Sasko mill in Port Elizabeth is the province’s only big milling plant.

The Eastern Cape is the country’s second-largest producer of citrus fruit. Oranges make up the vast majority of citrus products. Deciduous fruits such as apples, pears and apricots are grown primarily in the Langkloof Valley. Another crop in which the Eastern Cape leads national production is chicory. The province’s pineapple crop is grown in the same part of the Sunshine Coast that produces chicory.

The macadamia nut sector is growing. The Eastern Cape Rural Devel-opment Agency (ECRDA) has partnered with a community to plant the popular nut at Ncera in the Tyume Valley north of Alice.

The Eastern Cape holds 21% of the country’s cattle (about 3.2-million), 28% of its sheep (seven-million) and 46% of its goats, making it the largest livestock province by a substantial margin. The rich natural grasslands of the Eastern Cape have the potential to produce high-value organic meat, a product that is proving increasingly popular in health-conscious international markets.

Coca-Cola Sabco and SAB Limited’s Ibhayi brewery are the major beverage manufactur-ers in Port Elizabeth and Distell has a bottling plant in the city. Sovereign Foods in Uitenhage is the country’s fourth-biggest producer of poultry. 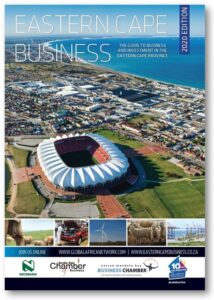