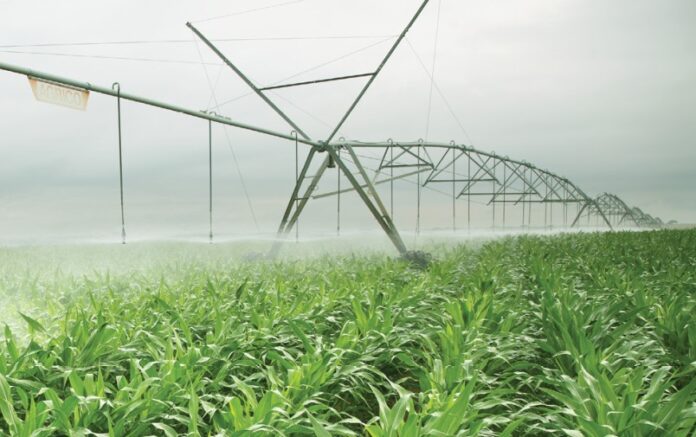 The North West is bordered on the west by the Republic of Botswana and on the east by Gauteng province, the engine of the South African economy.

The Vaal River runs along the province’s south-eastern border with the Free State, and the province also shares borders with the Northern Cape to the south and Limpopo in the north.

The province’s strategic location goes beyond its proximity to Gauteng: the major roads linking trade on an east-west axis pass through the province, as does the major railway line which runs from Cape Town in the south to Zimbabwe and beyond in the north.

The mineral reserves that still lie beneath the ground in the province are enormous. Platinum group metals (PGMs) predominate but there are significant deposits of gold, uranium, diamonds, copper, vanadium, fluorspar and nickel. Stone and limestone are also found in rich quantities.

Mining beneficiation takes place at many places, with Rustenburg being particularly strong in this sector. The economy of the town is closely linked to the fortunes of platinum mining, with the sector contributing about 70% of the city’s gross geographic product.

The North West is a major producer of maize and sunflower seeds and many other agricultural products. About 20% of South Africa’s maize comes from the province, as does 15% of its wheat.

The dry western part of the province is home to beef cattle, game ranching and hunting. The normally well-watered eastern and north-eastern regions can carry many kinds of crops, many of which find themselves on the tables of the citizens of the nearby urban centres of Johannesburg and Pretoria.

The agricultural sector also generates large-scale storage and logistics operations, particularly in Klerksdorp, Vryburg and Brits, together with a number of agri-processing plants.

The province’s three Technical and Vocational Education and Training (TVET) colleges and the well-respected North-West University all have several campuses catering to a wide range of educational disciplines. The university has a strong reputation as a research institution.

Manufacturing capacity is concentrated in the larger towns in the north-east and eastern parts of the province but there are plans to expand this capacity. Automotive components firms are clustered in Brits, which in turn is very close to the automotive manufacturing hub in Rosslyn (Pretoria) in Gauteng. Towns like Klerksdorp (agri-processing and engineering) and Potchefstroom (food and beverages) also have manufacturing capacity.

All of the big agricultural companies have storage and logistics operations and many of them are involved in agri-processing. Senwes is one of the biggest with extensive silo infrastructure while Suidwes has 17 retail outlets and MGK makes full-fat soy at its manufacturing plant.

Lichtenburg-based NWK makes liquid fertiliser and animal feed, processes sunflower seeds and runs 37 silos and three grain mills. Another subsidiary, Opti Chicks, has a capacity of 600 000 chicks per week. There are several milling facilities in the province.

A provincial Integrated Manufacturing Strategy has found that chemical processing holds great potential because of the province’s proximity to Gauteng’s markets and the availability of the ingredients needed for the manufacture of phosphate and nitrogen-based fertilisers.

A sector strategy for boosting clothing and textile manufacturing is also being developed.

There is also a possibility that a totally new sector, renewable energy, will help to transform the lives of previously excluded communities. This is already taking place to a small extent in that the province’s first solar plant is partly owned by the community in which it operates. There is much more scope for this kind of partnership, but there is also scope for the development of a manufacturing sector to support the renewable energy sector. A start has been made to attract solar panel manufacturers to the Platinum Special Economic Zone in the Bojanala District Municipality.

The province’s other manufacturing strategy – boosting agri-processing – is in better shape now that the worst of a prolonged drought is over. The creation of district agri-parks is intended to boost primary production which in turn will increase the amount of raw material that can be processed. Companies making car seats within the province’s active automotive parts sector would be a ready market for treated hides from the huge provincial cattle herd.

An amount of R110-million has been set aside for the establishment of a Special Economic Zone (SEZ) in the province. The project is intended to make investment more attractive by clustering infrastructure and related industries in one location. The SEZ planners hope to attract R4-billion in investment over a five-year timeframe.

The City of Rustenburg has started a planning process which looks forward to a time when mining’s role in the economy will be reduced, and sectors such as health and education might become more important. Renewable energy is another area where some preliminary work has been done.

The fact that Rustenburg’s plans also include the creation of a Mining Supply Park point to the fact that mining’s influence is likely to continue for many years to come. This is also true of some of the plans to diversify the province’s manufacturing base – they often rely on the base mineral that comes from mining anyway. Platinum prices may not be as strong as they were, but platinum group metals have enormous potential in the energy field, and North West researchers and businesses are working on possibilities to exploit this.

The Provincial Government of the North West has two main economic strategies:

Other areas of focus are: mineral beneficiation; renewable energy; retail and wholesale; ICT and the development of economic infrastructure.

Tourism has been identified as an important driver of future growth and the investment by Sun International of more than R1-billion in the Sun City complex is helping to create momentum in a sector which has a proven track record of creating jobs.

Two events took place in 2018 which placed North West tourism in the spotlight. The 2018 National Tourism Careers Expo (NTCE) took place at Sun City and was attended by about 7 000 school pupils and university graduates from around the country. At a Tourism Imbizo in Potchefstroom, more than 1 000 young people were encouraged to study in that sector. Tourism has grown steadily in the North West and has been a reliable creator of jobs.

The province’s other great assets include Sun City, the Pilanesberg National Park, private game lodges and the Hartbeespoort Dam. Two UNESCO World Heritage Sites are located at the Vredefort Dome (where a meteorite hit the earth about two-million years ago) and Taung, where the discovery by an archaeologist of a skull in 1924 is regarded as one of the most significant of all time. 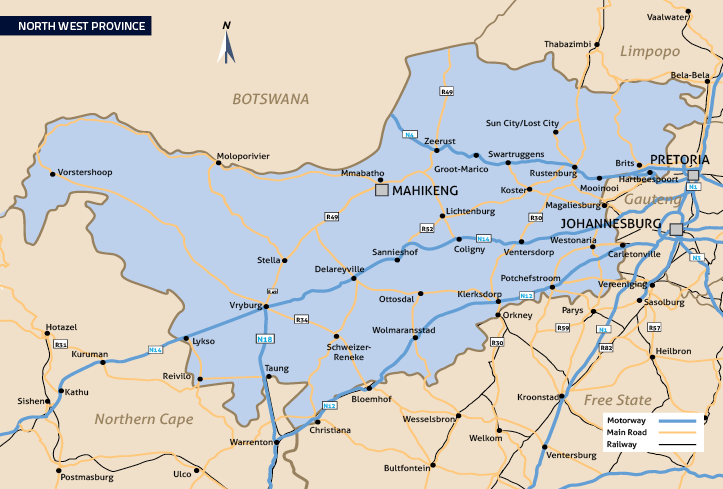 The capital city of the North West Province lies on the banks of the Molopo River. Situated in the north-west sector of the province near the Botswana border, the city has a strong services sector and a population of approximately 300 000.

The Mahikeng International Airport is served by SA Express. The city’s main sectors are financial services, services, transport and trade. The Garona District houses the North West parliament and government buildings. The administrative headquarters of the BaRolong tribe are located in the city. The arts are promoted by the Mmabana Cultural Centre, while the North West Institute of Hotel and Tourism Management is one of three tertiary institutions in the city. North-West University’s Graduate School of Business and Government Leadership is located in Mahikeng, and Unisa has a presence. Other institutions are the Taletso TVET College and the International School of South Africa.

The town is well served by hotels such as the Mmabatho Palms, Hotel and Casino Convention Resort. Mahikeng Game Reserve has white rhino and giraffe among its fauna.

The city of Potchefstroom is administered by the Tlokwe Local Municipality. A large campus of North-West University and its business school is located in the city, as is the Vuselela TVET College and the Potchefstroom College of Agriculture. More than 120 000 people attend the Aardklop Festival every year. The city has a population of about 173 000.

The sports facilities of North-West University are world class and have been the base for Spain’s soccer team and Australia’s cricket team in world cups. Tlokwe is a hub for the strong commercial agriculture of the region and has several food and beverage manufacturers. Nestlé has recently invested. Some of the bigger enterprises include fertiliser companies such as Kynoch, munitions manufacturers, and food processors like King Food. An army base contributes to the economy, and the airfield formerly used by the military is now run by the municipality.

The N12 Treasure Route passes through the city and holds potential for further development of tourist highlights such as Boskop Dam and the Mooi River on which the town is located.

Rustenburg is close to platinum mines and Sun City, two of the economic jewels in the crown of North West Province. The town is also near beautiful parts of the bushveld, the Magaliesberg Mountains and the Pilanesberg National Park.

Rustenburg has a varied manufacturing sector, although most of it is mine-related. Large-scale platinum smelters operate in Rustenburg.

One of Orbit TVET College’s campuses is in Rustenburg, Unisa has a regional office, and the Agricultural Research Institute’s industrial crops unit and the Seda Platinum Incubator are located in the city. Health facilities are good in the city, with Netcare and Life Healthcare having a presence, in addition to the provincial hospital. Rustenburg’s population is about 596 000.

With a population of over 400 000, Klerksdorp is an important regional centre and the town where several important companies’ headquarters are located. These include Senwes, through whose silos a large proportion of South Africa’s grains move every year, and a number of engineering enterprises which serve the mining industry.

Matlosana is situated on the N12 Treasure Route and is marketing itself as a potential logistics hub. An intermodal facility based in the town’s airport has been developed. The city council has set aside land for the development of industrial and commercial enterprises. Break-bulk facilities, storage space and distribution centres are needed, offering concrete opportunities for investors in those fields.

Bloemhof is a centre of maize growing and cattle raising on the southern boundary of the province, and DairyBelle has a large milk-production facility in the town. The Bloemhof Dam is one of the three large dams on the Vaal River that supply bulk water to surrounding areas. The Bloemhof Bonanza is the biggest and most lucrative inland-angling event in South Africa, with more than 2 000 anglers trying to win R1.5-million in prize money. The nearby SA Lombard Nature Reserve has a fine herd of black wildebeest 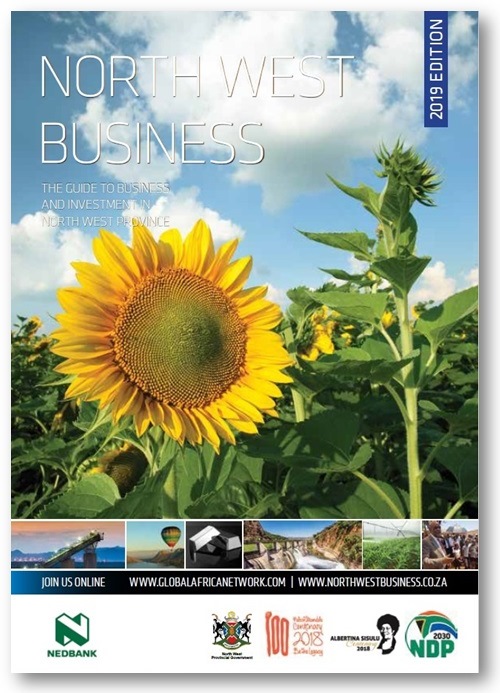