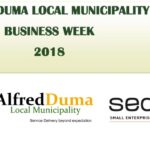 February 16, 2018
The Mayor of Alfred Duma Local Municipality, Cllr M V Madlala, cordially invites operational emerging businesses, established businesses and investors/developers to the Alfred Duma Business Breakfast.
facebook linkedin twitter
© 2017
We use cookies on our website to give you the most relevant experience by remembering your preferences and repeat visits. By clicking “Accept”, you consent to the use of ALL the cookies.
Do not sell my personal information.
Cookie SettingsAccept
Manage consent